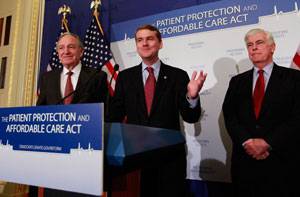 KHN’s Mary Agnes Carey reports from Capitol Hill, where the the Senate voted on four amendments to the Democrats’ health overhaul bill.

Jackie Judd: Good day, I’m Jackie Judd with Health On The Hill. There is breaking news on Capitol Hill, where the Senate has begun voting on amendments to the Democrats’ bill to overhaul health care. Thus ending, for now anyway, a procedural impasse with Republicans.

On the phone with me is Mary Agnes Carey of Kaiser Health News, who has spent the day in the Senate.

Mary Agnes, the first of four amendments that were voted on was brought up by Democratic Sen. Barbara Mikulski of Maryland, having to do with safeguarding coverage of mammograms and other preventive screening tests for women, done in reaction to controversial guidelines issued by a Federal taskforce, recently. Please fill us in.

Jackie Judd: The second amendment that was passed was also brought up by a Democrat.

Mary Agnes Carey: Right, that’s right. Michael Bennet of Colorado, along with many other Democrats, brought up an amendment on Medicare that says that the bill would not cut any access to basic Medicare services. And that savings used in the bill, the Medicare reductions, would be used to strengthen the Medicare program. This was done in response to Republicans on the floor (leading that charge today was Sen. John McCain, a Republican from Arizona) who have been saying, ‘look this bill cuts Medicare, this bill will hurt seniors and people need to know about that.’ So this was a Democratic response to that charge from the Republicans.

Jackie Judd: And that amendment passed with 100 votes after the McCain amendment failed.

Mary Agnes Carey: The McCain amendment would have said, take the Medicare bill, send it back to the Finance Committee, strip out all those Medicare reductions and then bring it back to the floor. And again, this is to focus in on the Republicans’ concern and charge that the Democrats were going to cut Medicare and hurt seniors. So that’s what Sen. McCain’s amendment would have done.

Jackie Judd: And then the fourth amendment that was voted on today?

Mary Agnes Carey: Right, that was from Lisa Murkowski, a Republican from Alaska, dealing with the whole taskforce-recommendations-mammogram issue. She was instructing the Secretary of Health and Human Services to not factor those task force recommendations for any rankings in denying coverage for preventive coverage for women. But Sen. Murkowski also added language in her amendment that abortion could not be considered a preventive care service. Her amendment failed on a vote of 41 to 59.

Jackie Judd: Mary Agnes, when you step back from these individual votes and look at the whole day, what does it say about what we should expect in the next two to three weeks, regarding more amendments and the ultimate vote on the large health care bill?

Mary Agnes Carey: I think it shows that you’re going to have a very long, very intense fight over health care reform. Republicans are going to look at every provision of this bill, and just because today, for example, their Medicare amendment failed, does not mean that you won’t continue to hear that Democrats are going to harm the Medicare program.

The same thing on the preventive care issue. They’ll talk a lot, as they have and will continue to, about the power Republicans feel the bill gives to federal bureaucrats to decide what care is covered. We’re going to hear hours and hours of this in the weeks ahead. Sen. Harry Reid of Nevada, the majority leader, has said they’re going to work this weekend, we’ll have votes this weekend. He’s asked members to clear their schedules for the subsequent weekends, because as we know, Democrats and President Obama really want to get this bill passed before Christmas. But whether or not that can happen I think is extremely unclear.

Jackie Judd: Well do you expect the Republicans to come back and try to delay, one way or another, other votes on other amendments? There was some reporting done today on a guide that Sen. Judd Gregg, a Republican from New Hampshire put out, giving other Republican senators some tips about how to slow things down.

Mary Agnes Carey: Exactly, you could have the language of every amendment read. You can voice an objection at any time. You could have a quorum call, where you want a roll call vote. You could do all sorts of things to slow the procedure. And I think that Republicans clearly believe that it’s in their best interest because the more time they feel is spent on this bill, the more public examination of it, the better their case can be made, their feeling that this is not a good bill for the health care system, not a good bill for America. Democrats of course have the opposite feeling, but to your point, I think if Republicans can slow things down, they’ve got more time to attack the bill.

Health On The Hill: After Delays, Senate Votes On Health Bill Amendments