Jackie Judd and KHN’s Mary Agnes Carey examine the health care issues in Tuesday night’s State of the Union address — and Sen. Rubio’s Republican response — in this Health on the Hill discussion.

JACKIE JUDD: Good day, this is Health on the Hill. I’m Jackie Judd. President Obama did not spend a lot of time on health care during his State of the Union address. Still, there were some hints about what the coming months may bring. Senior correspondent for Kaiser Health News, Mary Agnes Carey, is here to help us analyze Mr. Obama’s speech. Welcome, Mary Agnes. 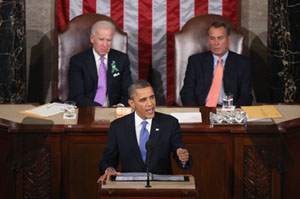 JACKIE JUDD: When the president did talk about health care, it was mostly about Medicare. He highlighted two specific reforms that he’d like to see. What are the details of those?

MARY AGNES CAREY: These are two ideas the president has previously advanced. One deals with the idea of prescription drug rebates from the pharmaceutical industry for the approximately nine million dual eligible beneficiaries. These are folks who qualify for Medicare and Medicaid. The drug industry used to pay rebates on these people when they received their drugs from the Medicaid program. When the prescription drug program was created in Medicare, they shifted to Medicare for that drug coverage and the rebates went away. The president wants to bring those back. A second item that he talked about was charging wealthier Medicare beneficiaries more for their coverage. This is already in current law, but he wants to make some changes to raise more money by doing that.

JACKIE JUDD: And where do Republicans stand on each of these?

MARY AGNES CAREY: I believe that most Republicans are going to fight him on the drug rebates for the prescription drug program for the dual eligibles. They will say — and the drug industry has already said: “This is going to interfere with the Medicare drug program’s ability to negotiate prices.” They feel that it is really going to hurt Medicare Part D. But he may get some support on the idea of charging the wealthier beneficiaries even more for their Medicare coverage.

JACKIE JUDD:  The president also said that he’s open to what he called “additional reforms,” as long as they didn’t violate what he called the “guarantee of a secure retirement.” He wasn’t very precise. What do you think he was referring to there?

MARY AGNES CAREY:  I don’t think he’s taking about an increase in the Medicare eligibility age. That was taken off the table earlier this week by Jay Carney, the White House spokesman. But the president talked about modest reforms, so there may be some tinkering around the edges, but nothing radical that would have a major overhaul of the program.

JACKIE JUDD:  After the president spoke, the Republicans put forward Sen. Marco Rubio from Florida. In his speech, he suggested that whatever the president wants to do, he’s not going to go far enough — that he’s going to risk bankrupting Medicare. What do you take from his remarks about the future of bipartisanship on the Hill?

MARY AGNES CAREY:  Sen. Rubio, along with many Republicans, have felt that the current structure of Medicare is not sustainable for the future. Sen. Rubio took great pains last night, as many Republicans have, to say that they don’t want to change the program for [current] beneficiaries, but looking into the horizon, the millions of baby boomers coming into the program — they want a major overhaul. Many Republicans have advanced the idea of premium support, which would have a limited amount of money per beneficiary. The president and Democrats have fought him on this.

But I think this is another reminder to the public that Republicans are still going to embrace bigger, broader reforms to Medicare — premium support and so on — in the years ahead.