Fights over defunding the health law remain at the center of legislative battles eight days into a federal government shutdown and just a week before the nation hits its debt ceiling. KHN’s Mary Agnes Carey and CQ Roll Call’s Emily Ethridge discuss the latest.

>> Listen to audio of the discussion

MARY AGNES CAREY: Welcome to Health on the Hill. I’m Mary Agnes Carey. House Republicans have insisted that the 2010 health law be defunded or significantly changed before they would agree to fund the government beyond Oct. 1. And now, eight days into a federal government shutdown and a week away from a deadline to raise the federal debt ceiling, is the party’s message changing?

A key House Republican, House Budget Committee Chairman Paul Ryan of Wisconsin, published an opinion piece today in the Wall Street Journal that called for bipartisan compromise in areas such as overhauling entitlements and taxes. Obamacare, as the health law is known, wasn’t even mentioned. In a piece in The Washington Post, House Majority Leader Eric Cantor also downplayed the health law and called on President Obama to work with Congress to raise the debt ceiling. 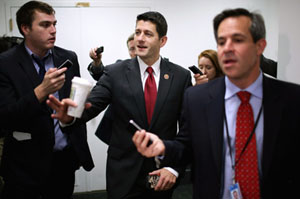 Emily Ethridge of CQ Roll Call is with us today to discuss this fast-moving story. Thanks so much for joining us, Emily.

EMILY ETHRIDGE, CQ ROLL CALL: Thanks for having me.

MARY AGNES CAREY: Shortly before the federal government shutdown on Oct. 1, the House passed measures to defund or scale back the health care law. And like the dozens of other proposals similar to them, none of them have gained traction in the Senate. Does that action, plus these op-eds that appeared today signify a shift in Republican strategy, and going forward should we expect to hear more about entitlement changes or changing the tax system rather than postponing the health law?

For instance today House Speaker John Boehner came to the House floor and gave a very long speech about the health care law and the problems he sees that it’s having and the problems that it’s causing and how he really wants to focus on repealing the health care law. So you’ve got both sides happening right now, one pushing for more Obamacare focus and the other one saying, “Let’s put that aside for now. It’s not really working.”

MARY AGNES CAREY: You’ve mentioned splits in the Republican Party over Obamacare. What about Democrats? Are they hanging together?

EMILY ETHRIDGE: Democrats are united against defunding Obamacare. There a few items, very small items, that we could see gain traction if Republicans want to compromise. One of those is the medical device tax. Democrats and Republicans both say that they would repeal that. But the problem is that is not really enough of the health care law for Republicans who want to defund the health care law. That’s not enough for them to accept.

MARY AGNES CAREY: So when Republicans talk about defunding the health care law, what do they actually mean? Isn’t much of the current money for the health insurance exchanges and the Medicaid expansion mandatory spending that’s already out of the door?

EMILY ETHRIDGE: That’s exactly right and it would really create a huge mess if there were to be a law passed that “defunded the law.” It would mean that some things would keep going in the law, but other things wouldn’t be able to be enforced.  You would have a situation where the law would still be that people must buy insurance or pay a penalty, but there would be no money available for the government to actually enforce that penalty. So you could break the law but no one could enforce it that you were breaking the law. So it would be incredibly confusing legally and for the citizens and for the government.

MARY AGNES CAREY: So here we are just days away from hitting the federal debt ceiling. What’s the next step?

EMILY ETHRIDGE:  There has to be some kind of agreement — and like what Budget Chairman Paul Ryan is doing as you mentioned to try to get some agreement to: “OK let’s raise the debt ceiling.” A lot of members on both sides from both parties are saying: Let’s deal with a continuing resolution to fund the government, open it back up and the debt ceiling all in one package. Now that this date is nearing, they say let’s deal with it all at once.

That seems to be where people are going, but we just haven’t seen a lot of progress up here on the Hill about what that would actually look like.

MARY AGNES CAREY:  And the president is calling people to the White House, correct?

EMILY ETHRIDGE:  That’s right. The House Democrats are going to the White House today. He said that he will meet with House Republicans and Senate Democrats and Senate Republicans all in the next couple of days. So maybe something will come out of those meetings. Certainly the president hopes so.

MARY AGNES CAREY:  And let’s assume that we at some point will move beyond the shutdown and the debt ceiling debate. Is the effort to defund Obamacare over?

EMILY ETHRIDGE:  It’s absolutely not over. Even once we get past these issues right now, I think Republicans are sworn to try to take this law down. They really feel like they are in crunch time right now, because they want to stop the law before the biggest parts are really in effect. And that starts Jan. 1, 2014. That’s when people would start getting subsidies to buy insurance, that’s when the requirements all take effect, and they really want to stop it before that starts.

So this is their crucial moment to get at the health care law that they see.

MARY AGNES CAREY:  Thanks for the update, Emily Ethridge of CQ Roll Call.

EMILY ETHRIDGE:  Thanks for having me.