KHN’s Mary Agnes Carey talks with Jennifer Haberkorn of Politico Pro about the Senate’s confirmation Wednesday of Marilyn Tavenner to head the Centers for Medicare and Medicaid Services and the challenges she will face.

>> Listen to audio of this interview.

MARY AGNES CAREY: Welcome to Health on the Hill, I’m Mary Agnes Carey. Today the Senate confirmed Marilyn Tavenner to lead the agency that oversees Medicare and Medicaid. Tavenner now becomes the first confirmed head of the Centers for Medicare & Medicaid Services since 2006. With us to discuss this development is Jennifer Haberkorn of Politico Pro. Thanks Jennifer for being with us. 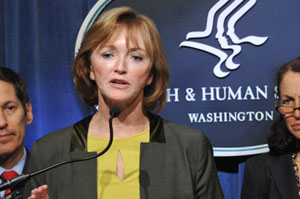 MARY AGNES CAREY: Marilyn Tavenner had a much easier time than her predecessor, Don Berwick, who was President Obama’s first nominee to head CMS. Why?

JENNIFER HABERKORN: You’re right. It was really like night and day. Don Berwick ran into a ton of opposition once it became public that he made comments in support of the British health care system. Marilyn Tavenner, on the other hand, did not have a history of controversial statements. If there are skeletons in her closet, no one has really found them yet. She had a relationship with the Hill; she was at CMS for several years before her confirmation hearing at Senate Finance [Committee], which went swimmingly.

There was also a significant amount of time between the health law’s passage when politics, particularly over health care, was at its peak on Capitol Hill. Don Berwick on the other hand, came up shortly after the health law passed, when emotions were very raw. So, it really was night and day – totally different situations.

JENNIFER HABERKORN: That’s right. Tom Harkin, one of the health law’s greatest supporters on Capitol Hill objected because the Obama administration keeps taking money out of the Prevention and Public Health fund, which is kind of his baby in the health care reform law. And he put a hold on Tavenner’s nomination, meaning it couldn’t come up for a vote on the Senate floor for about a week.

He made it clear that he supported Tavenner’s nomination, but wanted to do this to make a point. And senators have done before on other nominations. He wanted to make a point that the Prevention and Public Health Fund should not be touched anymore.

MARY AGNES CAREY: Why hasn’t CMS had a confirmed administrator since 2006? What’s been the hold up there?

JENNIFER HABERKORN: It’s mostly been politics. There was a Republican nominee who came up at the end of the Bush administration. It looked like he was about to get confirmed and then at the last minute a Medicare regulation came out that angered some Senate Democrats and they effectively stopped his nomination.

There was Don Berwick, who we talked about, was nominated by President Obama and ran in to Republican opposition. Health care is an easy target, politically. The Centers for Medicare & Medicaid Services has one of the largest budgets in the federal government and has a lot of authority. With that there is a lot of things to criticize. So those nominees have gotten hung up. And there’s also been moments when presidents have decided not to nominate anyone at all. When President Obama was first elected, it took him several, several months before he put up a nominee.

MARY AGNES CAREY: What difference do you think Marilyn Tavenner’s confirmation will make in the implementation of the health care law?

JENNIFER HABERKORN: I don’t think it will make a significant difference, particularly because she has been in this job in acting capacity for about a year and half already. But at the same time, these Republican senators, particularly the ones who voted for her, can now call her up and say “Where are you on such and such provision?” and “I have problems with the health law on this aspect, what are you going to do about it?”

And just having her in that confirmed role makes it a more even-handed conversation. She’s been confirmed. She’s gotten that senator’s vote and they need to have a conversation. But in the grand scheme of things, it won’t change too much.

MARY AGNES CAREY: Speaking of the health care law, Department of Health and Human Services Secretary Kathleen Sebelius has caused some concern on Capitol Hill about her efforts to raise money to implement the law. What’s the latest there?

JENNIFER HABERKORN: Right now a lot of Republican senators are paying a lot of attention to the issue and expressing concerns that it could be illegal for her to go to companies that she regulates. HHS has said it has contacted providers and religious groups to promote the health care law and that it is legal under the Public Health Service Act to encourage programs that promote public health. I think we are going to see continued attention on the issue. It’s not going to go away. Right now a lot of the oxygen on Capitol Hill is taken up by Benghazi and the IRS. But definitely they are going to come back to this and we might see Secretary Sebelius have to answer questions publicly about what happened.

MARY AGNES CAREY:  Thanks so much Jennifer Haberkorn of Politico Pro.