MARY AGNES CAREY: Welcome to Health on the Hill. I’m Mary Agnes Carey. The federal official in charge of the troubled healthcare.gov website was on Capitol Hill today. Centers for Medicare & Medicaid Services Administrator Marilyn Tavenner appeared before the House Ways and Means Committee to answer questions about what’s wrong with the website and how the government intends to fix it. Jennifer Haberkorn of Poltico Pro was at that hearing and joins us now. Thanks for being here. 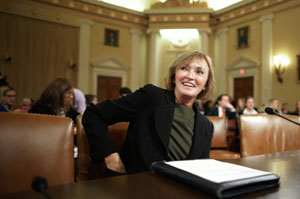 MARY AGNES CAREY: We’ve heard so much lately about the technical problems with healthcare.gov. What new information did you learn today about what’s wrong with the site and how the administration plans to fix it?

JENNIFER HABERKORN: We didn’t learn a ton that was new. But Marilyn Tavenner, the administrator of the Centers for Medicare & Medicaid Services, did apologize for the problems that people have been experiencing on healthcare.gov. We also learned that some technical parts of the website, such as the SHOP exchange for businesses and the Spanish version of healthcare.gov are going to be available at the end of November. Tavenner also mentioned QSSI, one of the contractors that was working on the website has been hired as a general contractor to repair the broken website.

MARY AGNES CAREY: Another contractor on the healthcare.gov website, CGI, has blamed CMS for not starting comprehensive testing of the site well in advance of that October launch. Today, Marilyn Tavenner was asked about that company. Did she blame them for the website’s woes?

JENNIFER HABERKORN: Yes, she did put in her written testimony that a subset of contractors had not met expectations, and Republicans called her on that and said, “We want names.” And Tavenner said CGI. It was interesting that was the only company she named, the lead contractor. The Republicans followed up and asked if there would be any repercussions for that financially, if their contract with the federal government requires them to repay some of their payments or anything like that. Tavenner kind of dodged the question and said she would get back to the committee on that.

MARY AGNES CAREY: So did she elaborate at all about where they didn’t meet expectations?

JENNIFER HABERKORN: No, she provided no details, which I have to say was kind of the theme throughout the hearing.

MARY AGNES CAREY: Federal officials have also talked about 700,000 people have also successfully created accounts on the website. Did Tavenner provide any more clarity on how many of those people have actually enrolled in a health plan?

MARY AGNES CAREY: How much discussion was there today about this November 30th target date for all of the site problems to be fixed? Did she talk at all about how they came up with that date and why they’re confident these problems will be taken care of for most users by November 30th?

JENNIFER HABERKORN: Tavenner said that they had outside experts come in and analyze what’s wrong with the site and how much time it would take to repair it, and they came up with November 30th. She said the site will in fact be fixed by then. Tavenner also said she would also give Congress the punch list, which is the term they’ve used to describe a list of all of the problems on the site, and the order in which they’re going to be repaired.

MARY AGNES CAREY: You’ve seen a lot of these hearings. How would you describe the overall tone of this session? Because Marilyn Tavenner has had such a good working relationship with Republicans. Has that changed?

JENNIFER HABERKORN:  She really has had a good relationship with the Republicans. This hearing was very partisan. The Republicans were hammering away at a lot of the — in fact they didn’t talk too much about website — they hammered away at other problems in the law, particularly that people are getting notifications that their plans are being cancelled or premium increases.

Democrats mostly defended the law. In fact, many Democrats did not even ask a question of Tavenner. They used their allotted time to just talk about the benefits of the legislation or to remind Republicans that when the Medicare Part D prescription drug program was rolled out, that had many problems and many glitches, as well.

MARY AGNES CAREY:  Tomorrow there’s another big hearing: Department of Health and Human Services Secretary Kathleen Sebelius is going before the House Energy & Commerce Committee, which was the panel that had all those federal contractors in last week to talk about healthcare.gov. What can we expect to happen tomorrow?

JENNIFER HABERKORN:  I’m expecting tomorrow’s hearing to be even more contentious than today’s. These are federal officials who had a major role in rolling out healthcare.gov. But Secretary Sebelius’ position is seen as more political. Most of that is because, as you mentioned, Marilyn Tavenner has had very good relationships on Capitol Hill, whereas Secretary Sebelius has not. She has been the public face of the health care reform law, and for that reason many Republicans want to question her.

MARY AGNES CAREY:  Thanks for your time, Jennifer Haberkorn of Politico Pro.