It seems like every firefighter you ask in Houston can rattle off examples of 911 calls that didn’t even come close to being life-threatening:

“A headache, or a laceration,” says Ashley Histand.

Tyler Hooper sums it up: “Anything from simple colds to toothaches, stubbed toes to paper cuts.”

The Houston Fire Department logged more than 318,000 incidents last year, but only 13 percent of them were actual fires. The rest were medical calls, making a career in firefighting seem more like a career in health care. 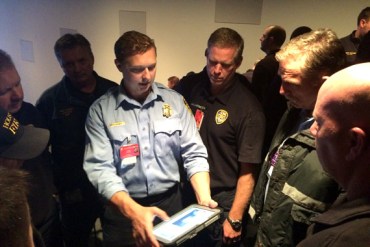 Houston firefighters learn how to use a live video chat program, so they can consult with an emergency medicine doctor while out on 911 calls. (Photo courtesy of Houston Fire Department)

Hooper drives the busiest ambulance in the city, based in a southside firehouse three miles east of the old Astrodome. Last year it answered more than 5,000 calls, and some of those were pretty frustrating, he says.

“We make a lot of runs to where it’s not an emergency situation,” he says.  “And while we’re on that run, we hear another run in our territory, it could be a shooting, or a cardiac arrest, and now an ambulance is coming from further away and it’s extending the time for the true emergency to be taken care of.”

Hooper says the area his ambulance serves has many lower-income residents who don’t have insurance. But even those that do have coverage don’t always have a regular medical provider or a car to get to appointments.

“They don’t know they could walk into certain clinics without appointments or without insurance,” he says. Calling 911 is “just what they’ve always done or what they’ve been taught.”

City officials hope to break that cycle with a program designed to connect these residents in their homes with a doctor, via the emergency medical technicians and firefighters who answer the call.

On a recent morning, Hooper drove through the rain to answer a call at an apartment complex near Hobby airport. Susan Carrington, 56, sits on her couch in a red track suit, coughing and gasping.

“Have you seen your doctor?” Hooper asks. Carrington shakes her head.

Carrington doesn’t have a regular doctor. She called 911 because she got “scared.” It hurt to breathe, and the cough had been bad for four days, she says. In January, she had visited an ER for similar symptoms and had been given an antibiotic for pneumonia.

“Based on your vital signs, everything looks stable to us,” Hooper says. “Your lungs are clear, your blood pressure’s great, your pulse is good. Everything looks good.”

Previously, Hooper might have taken Carrington to the ER, just to be safe. But now he has an alternative – a computer tablet loaded with a video chat application.

He launches the app and Dr. Kenneth Margolis appears on the screen. He is seated in the city’s emergency management and 911 dispatch center, almost 20 miles away. Hooper swivels the laptop screen toward the couch, bringing doctor and patient face-to-face.

“Ms. Carrington, I’m a doctor with the fire department,” Margolis begins. “So you’re having a cough and feeling weak and having some trouble breathing, is that right?”

“And it hurts when you breathe and cough?”

The questions continue, with Margolis able to watch Carrington’s face and reactions.

Margolis agrees an ER visit isn’t necessary. Instead, he schedules an appointment for her at a nearby clinic for the next morning. He also arranges a free, round-trip cab ride.

The intervention is known as Project Ethan, an acronym for Emergency TeleHealth and Navigation. It rolled out across all city firehouses in mid-December.

“I think a lot of people are very surprised that they can talk to a doctor directly and have been very happy with that,” says Dr. Michael Gonzalez, the program’s director and an emergency medicine professor at Baylor College of Medicine.

Gonzalez says the idea is to direct patients such as Carrington to primary care clinics, instead of automatically bringing them to the emergency room, where ambulances can be tied up for precious minutes — even an hour — as EMTs do paperwork or wait for a nurse to admit the patient.

By diverting some patients to clinics, ambulances can stay in the neighborhoods and overloaded emergency rooms can focus on urgent cases.

Across the country, emergency medical services can’t keep up with the demand, said Dr. Richard Bradley, chief of the Division of Emergency Medical Services and Disaster Medicine at UT Health in Houston.

“I think that the Ethan approach is really a novel idea and really quite a good,” said Bradley, who is not involved in the project. “One of the advantages of having an emergency physician on the other end of the line is you’ve got someone who is best suited to be able to look for subtle indicators of what may be an emergency.”

Other cities have experimented with programs to relieve the burden on emergency responders. Some programs analyze 911 data to identify “super-utilizers,” and send teams into their homes to arrange needed services such as transportation and follow-up care after hospitalization. Those home-visit programs are often called “community paramedicine,” especially if they use paramedics to problem-solve the medical issues.

Other cities have tried to divert 911 callers by using nurse hotlines. Houston has also tried that approach, but firefighters complained it took too long, and patients never spoke directly with the nurse.

Gonzalez says a key component of the telemedicine program is that it doesn’t just turn patients away from the emergency room. It offers an alternative — a doctor’s appointment that day or the next, and transportation there and back. City health workers also follow up with Ethan patients to identify other issues that may be leading them to use 911 inappropriately.

The program costs more than $1 million a year, but the city has secured some grants and federal funding to help cover those expenses.

But Gonzalez predicts the program will eventually reap far more in savings for the region’s overburdened emergency system.

A 2011 study of Houston-area emergency rooms showed 40 percent of visits were for primary-care related problems. Treating those problems in the ER cost, on average, $600 to $1,200 per visit, compared to $165 to $262 if the patients had been treated in an outpatient clinic. If all those ER visits could be diverted to a clinic, the savings would be more than $2 million.

Firefighter Alberto Vela recounted the experience of one woman who typically called 911 up to 40 times a month, often for very simple things, such as to get a prescription refilled. On one of those calls, he tried the video chat with her.

“I was so surprised by how long it took, it took maybe six to seven minutes, tops” to deal with her issue, Vela said. “It was awesome, and then we left the scene and were making more calls after that.”

Vela believes the program helped the woman find a regular clinic and transportation, because he hasn’t visited her home for months. “I would ask others shifts, ‘Hey, did you meet this lady?’ The other shifts said they hadn’t heard from her either. “And that’s very rare. So it’s working,” Vela said.

This story is part of a reporting partnership with NPR, Houston Public Media and Kaiser Health News.