Sherry King had lost her job as a dental assistant and was stretching her food, sometimes going without any fresh fruit or vegetables. But the suburban Houston resident didn’t reach out for any help — even from her own relatives, whom she didn’t want to worry.

Then she switched to a new doctor late last year. “They asked me, ‘Do I have enough food? Do I have access to nutritious food?’ ” the 51-year-old recalled. “When they asked me that, it made me cry.” That prompted the medical practice to take note of her situation, and a clinician soon introduced King to several local food banks that carry fresh produce and some meat, such as chicken.

Nearly 1 in 8 Americans live with some degree of food insecurity, according to the most recent data from the U.S. Department of Agriculture.

Increasingly, doctors and nurses are realizing that they need to ask directly about food stress, said John Weidman, deputy executive director at The Food Trust, a Philadelphia-based nonprofit organization seeking to improve food access. “This is not naturally going to come up in conversations.” Otherwise, he said, patients with a near-bare cupboard might buy cheaper but unhealthful food or skimp on prescriptions or other medical care to avoid going hungry. 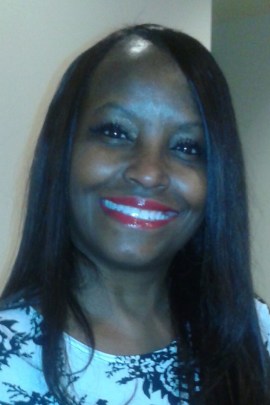 Sherry King lost her job last year and was having trouble finding money to purchase the food she needed to stay healthy. Her doctor’s office took note of her situation and helped connect her to several food banks that carry fresh produce and some meat. (Courtesy of Sherry King)

Starting in fall 2015, clinicians at Houston-based Memorial Hermann Health System began to examine the food struggles among patients at four medical sites, including the physician practice where King gets care, as well as emergency rooms and 10 school-based clinics in areas with high rates of poverty. They’ve asked patients two questions: Did you run out of food in the prior month, or did you think that you would? Depending upon the location surveyed, 11 percent to 30 percent said they did.

There’s been “some surprise at the numbers,” said Carol Paret, the system’s chief community health officer and a senior vice president. “That’s one of the things that the doctors have realized — you can’t tell this just by looking at somebody.”

This summer, clinicians at Memorial Hermann will expand their effort across the 15-hospital system, routinely asking hospitalized patients, along with patients seeking care at roughly 225 physician practices affiliated with Memorial Hermann, about their food supply, Paret said.

In the process, preconceptions are being debunked, Paret said. Even obese patients might be coping with food shortages or loading up on high-calorie foods during the limited stretches when it’s available, she said. Senior citizens barely eking by on a fixed income might wear their nicer clothes for an outing to the doctor’s office, creating the perception they’re doing fine financially.

Amid “the hidden pockets of poverty” in suburbia, someone who has been laid off might put every dollar into keeping their house and car, with little left to fill the refrigerator, Weidman said. The suburban practice where King is treated — staffed by more than 50 physicians and physician residents — is located southwest of Houston in Sugar Land, Texas. The median household income for the surrounding ZIP code is $92,000 annually, nearly twice the statewide median of $53,200.

Before asking patients about food insecurity, most of the doctors and nurses would likely have predicted that no more than 2 percent qualified, said Dr. Laura Armstrong, a family physician in the practice, Physicians at Sugar Creek. “Then it ended up being 11 percent, which was, I think, fairly shocking to most of us.”

Armstrong said she was taken aback upon learning that those without sufficient food included some patients who had jobs with insurance, as well as numerous seniors. The rates were even higher at the other locations that Memorial Hermann surveyed, including 30 percent at the school-based health clinics and 22 percent among the uninsured or otherwise vulnerable patients getting primary care in the system’s emergency rooms.

When feasible, Armstrong will switch patients who are experiencing food problems to a more affordable medication. In the case of diabetic patients, she might postpone adding a second or third drug, to see if some help with nutritious food might stabilize their blood sugars without the additional medication cost.

Some are trying to stay fed on astoundingly tight budgets. One patient, who has rescheduled a cancer biopsy because of finances, told Armstrong she has $26 available for food each week.

The practice has hired a community health worker to connect patients with food banks and brainstorm how to get better nutrition on a slim wallet. It also has planted a vegetable garden, so patients can literally grab some okra or collard greens on the way home, Armstrong said.

It’s easier for doctors and nurses to ask about food worries if they feel as if they can offer some options, said Chinwe Onyekere, associate administrator for Lankenau Medical Center, a 370-bed hospital just outside of Philadelphia. Since 2013, medical school student volunteers there have paired up with patients who report food difficulties on a social needs survey. (Food is the most common problem cited, surpassing transportation or housing needs.)

The students help eligible patients sign up for food stamps. Through an initiative with The Food Trust, Lankenau clinicians also can “prescribe” patients with diabetes and other chronic conditions coupons for produce at more than two dozen farmers markets, Onyekere said. The coupons are tracked through the electronic medical record system; to date, roughly one-third had been redeemed.

Since her food struggles were already on the table, King confessed to her doctor this spring that she had delayed filling two prescriptions, including a hormonal drug she takes since undergoing breast cancer treatment several years ago. That week, her grocery bill had been unexpectedly high. By the time King sought care, she wasn’t feeling well, and her doctor blamed it on having missed medication for several days.

King has since learned she can visit a food bank every week, alternating between sites, rather than every other week. If the practice had never asked, she believes she’d still be limping along with processed food and little else some days. “That’s something you don’t talk to your doctor about,” she said. “You don’t tell your doctor ‘I’m running out of food the last 10 days of the month.’ ”

Houston Hospital Checking To See If Patients’ Cupboards Are Bare