Even though the $550 yellow pills sold as Korlym have a controversial origin as the abortion pill, Leslie Edwin says they “gave me life.”

The 40-year-old Georgia resident lives with Cushing’s syndrome, a potentially deadly condition that causes high levels of the hormone cortisol to wreak havoc on a body. When first diagnosed, she said, she gained about 100 pounds, her blood sugars were “out of control,” and she suffered acne, the inability to sleep and constant anxiety.

“I wouldn’t leave the house,” Edwin said of her first bout with the condition. “I quit my job after a certain point. I just couldn’t keep being in front of people.”

That’s when Edwin endured surgeries, including one to remove her pituitary gland. She went into remission, but then, in 2016, her weight shot up 30 pounds and the anxious feelings returned. Her doctors prescribed Korlym.

The drug’s active ingredient is mifepristone, once called RU-486 and better known as the abortion pill because it causes a miscarriage when taken early in a pregnancy. Nearly two decades ago, Danco Laboratories won approval to market Mifeprex in the U.S. as the abortion drug, with tight restrictions on use. Corcept Therapeutics, a Silicon Valley-based drug company, began marketing Korlym six years ago as a specialty drug for about 10,000 rare-disease patients such as Edwin.

The difference in price between Korlym and Mifeprex is striking, even though the ingredients are the same: One 200-milligram pill to prompt an abortion costs about $80. In contrast, a 300-milligram pill prescribed for Cushing’s runs about $550 before discounts. Patients wanting an abortion take only one pill. People with Cushing’s often take up to three pills a day for months or years.

Dr. Joseph Belanoff, chief executive of the drug’s maker, Corcept, said Korlym’s average cost per patient is $180,000 annually and concedes that “we have an expensive drug. There’s no getting around that.”

The story of Korlym highlights how America’s drug development system can turn an old drug into a new one that treats relatively
few — but often very desperate — patients.

When the Food and Drug Administration approved Korlym in 2012, it was designated as an orphan drug, giving Corcept seven years of market exclusivity as well as other economic incentives. Congress approved orphan drug incentives to encourage the development of medicines for rare diseases that affect fewer than 200,000 patients. Since the drug’s approval, Korlym’s price has risen about 150 percent, and last year the company’s revenue nearly doubled to $159.2 million. (Korlym is the company’s only product and treats about 1,000 patients in the U.S.)

“You can hike that drug [price] 50 percent or 80 percent, and if there is backlash you can walk it back,” said Dr. Joshua Liao, an associate medical director at University of Washington Medicine.

Corcept has steadily increased the price with little backlash.

Belanoff said the profits from Korlym pay for the company’s past spending on the drug’s research and development as well as its effort to create new drugs. The company last month reported an encouraging Phase 2 trial update on Korlym’s successor, relacorilant, a drug that could treat Cushing’s without the side effects for some women of endometrial thickening and possible vaginal bleeding.

The company’s pipeline is also full of potential oncology drugs that hold the promise of using molecules to influence the cortisol receptors, with wide-ranging effects in the body. Korlym in combination with another drug is being tested for the treatment of metastatic triple-negative breast cancer, which tends to be more aggressive than other types of breast cancer. And relacorilant is in the very early stages of testing to treat castration-resistant prostate cancer.

While many of the second-generation drugs are not related to Korlym structurally, Korlym did “provide the funding. … If there had not been orphan-drug pricing and the [Orphan Drug] Act, you would have to look for a different way to develop those drugs,” Belanoff said.

Alan Leong, senior research analyst and owner of BioWatch, who follows Corcept, said he thought the company might fail at one point but noted that Belanoff “played the odds” with Korlym and won.

So far, incrementally increasing Korlym’s price while adding patients has paid off. Corcept’s stock soared 27.4 percent in January before Teva Pharmaceutical Industries announced it had filed an application for a generic version on the drug. Teva declined to comment for this story.

Belanoff said he would like to know where Teva obtained enough doses of Korlym to successfully test a generic: “We have a single pharmacy and a single manufacturer and the medicine has to be [FedEx’ed] to the patient.”

Talking to analysts last month, Corcept Chief Financial Officer Charlie Robb said the impact of Teva’s generic filing for the next few years is “nothing but litigation, which we can comfortably afford.”

Corcept’s executives expect revenues to keep climbing, reaching $275 million to $300 million in 2018 — an expectation that has not changed despite Teva’s announcement.

Cushing’s syndrome happens when the body produces too much of the powerful hormone cortisol, which normally helps keep the cardiovascular system functioning well and allows the body to turn proteins, carbohydrates and fats into energy. But too much cortisol can be destructive. It can cause cognitive difficulties, depression, fatigue, high blood pressure, bone loss and, in some cases, Type 2 diabetes. Those affected by the syndrome can develop a fatty hump between their shoulders and a rounded face. Without treatment, patients can die of a variety of complications, including sepsis after the hormone compromises the immune system.

When the FDA approved Korlym for a specific set of Cushing’s patients, the agency required a “TERMINATION OF PREGNANCY” warning box at the top of the label. 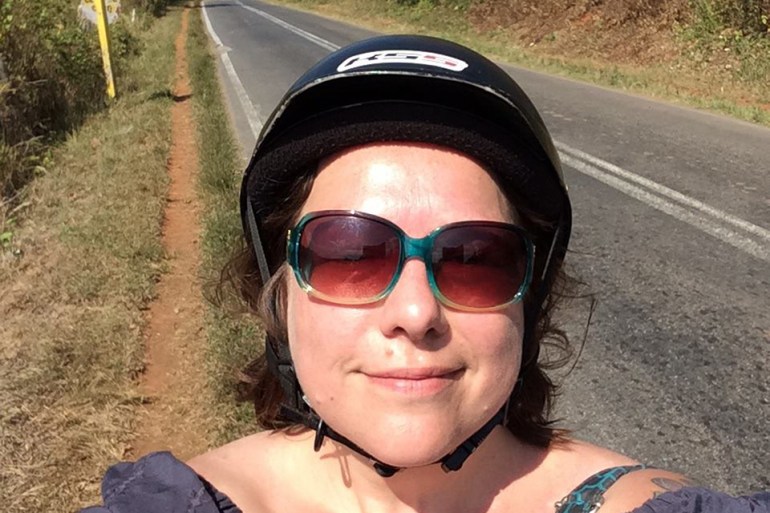 In 2016, Leslie Edwin takes a selfie while vacationing in Cuba. At that time, Edwin was managing her symptoms with daily doses of Korlym. (Courtesy of Leslie Edwin) 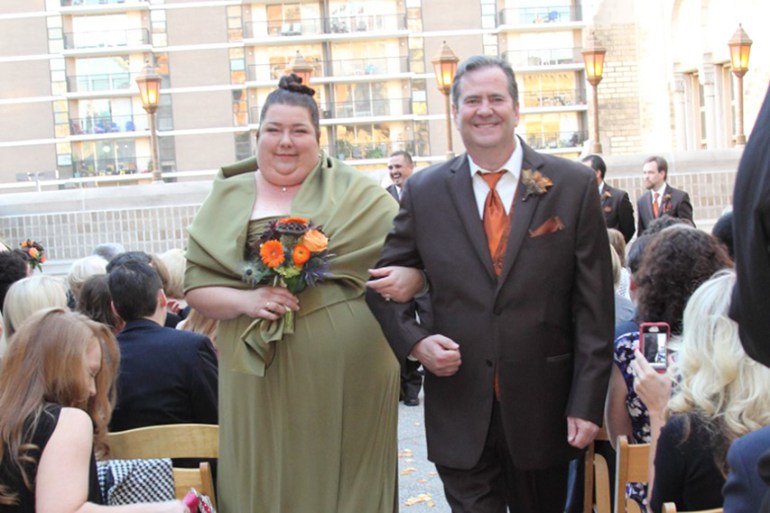 In 2012, Leslie Edwin walks down the aisle as a bridesmaid. Edwin says she wasn’t taking medication to treat her Cushing’s syndrome and describes this period as “when things got really bad.” (Courtesy of Leslie Edwin)

Dr. Constantine Stratakis, a senior investigator and scientific director at the National Institute of Child Health and Human Development who specializes in treating people with Cushing’s syndrome, calls mifepristone a “pioneering substance” because it “has a lot of crossover” to other receptors in the body.

That means the drug has a lot of potential uses. Belanoff and Dr. Alan Schatzberg, a Stanford University psychiatrist and scientist, co-founded Corcept in 1998 to explore whether mifepristone could help treat major depression. In 2002, Schatzberg said the drug “may be the equivalent of shock treatments in a pill.”

But clinical trials didn’t back up the claim. Schatzberg rotated off the board and left the company in 2007, saying the company “went in a different direction.” A congressional investigation also questioned whether Schatzberg had conflicts of interest as the government’s principal investigator overseeing clinical trials and a co-founder of Corcept, which had awarded him stock options.

In response to the congressional investigation, Stanford said Schatzberg was fully compliant with its internal conflict-of-interest policy.

Leong of BioWatch recalls the transition to Cushing’s research as a difficult time for Corcept. But after the “psychiatric depression program shut down, [Belanoff] stuck to it,” Leong said.

Corcept’s “Hail Mary” moment came in 2007. The company filed an application to see whether mifepristone might work for Cushing’s patients. (Cushing’s affects about 20,000 people in the U.S., but Corcept executives say the condition often goes undiagnosed.)

Developing the drug cost about $300 million, Belanoff estimates, and involved long-term toxicology tests to ensure that patients could safely take higher doses for months or years. As an orphan drug, a portion of Korlym’s research and development costs could be written off. For example, Corcept reported in 2013 that it had $19.7 million in federal tax credits.

And while Korlym’s annual costs pale against other specialty drugs, which run as high as $750,000 a year, the climbing price tag and increasing number of patients do affect the health care system.

“It’s like an unseen cost and then down the road this is a huge cost burden,” said the University of Washington’s Liao.

Most patients are covered by private insurance, Belanoff said, but Medicare and Medicaid are paying for the drug as well. According to Medicare Part D data, 52 Korlym patients cost Medicare $2.6 million in 2013. Two years later in 2015, 115 beneficiaries filed claims of $11.4 million.

In Georgia, Leslie Edwin is on private insurance and describes herself as being in “a really high tax bracket” yet she never paid more than $25 a month through Corcept’s patient assistance program called SPARK (the Support Program for Access and Reimbursement for Korlym).

“Across the board, it would be very difficult to find any patient that pays the full price,” said Edwin, who volunteers as president of the nonprofit patient advocacy group Cushing’s Support and Research Foundation. The small organization, which reported $50,000 in contributions and grants in 2015, notes on its website that Corcept as well as Novartis Oncology provide financial support to the organization. Edwin is not paid, and the group’s federal tax filing details that the majority of its expenses go to distributing a quarterly newsletter, contacting members and patients “to promote mission,” and providing referrals to doctors.

Belanoff said he believes Corcept has a “social contract” to take care of patients and pledged that any patient who is prescribed Korlym will get it regardless of insurance coverage or costs.

“We were starting with a notorious drug, and the growth has been steady from a very low base over time,” Belanoff said, emphasizing that the “single most important thing” is that the drug works very well.

Dr. Sherwin D’Souza at St. Luke’s Boise Medical Center in Idaho prescribed Korlym for the first time last year to Vonda Huddleston, knowing the company would provide financial assistance until Huddleston could get insurance to pay for surgery.

Huddleston, though, recalled being concerned about the price and what it would cost her out-of-pocket. The company provided her first two months’ worth for free and asked her to call back when she was enrolled for insurance.

“They were so eager to get me on this medication,” she said.

For Each Critically Ill COVID Patient, a Family Is Suffering, Too

Scientists Warn Americans Are Expecting Too Much From a Vaccine