NEWPORT BEACH, Calif.— Hoag Memorial Hospital Presbyterian, one of the largest and most respected facilities in Orange County, needed to move quickly.

A big insurer had warned that its maternity costs were too high and it might be cut from the plan’s network. The reason? Too many cesarean sections.

The C-section rate at the time, in early 2012, was about 38 percent. That was higher than the state average of 33 percent and above most others in the area, according to the California Maternal Quality Care Collaborative, which seeks to use data to improve birth outcomes.

Within three years, Hoag had lowered its cesarean section rates for all women to just over a third of all births. For low-risk births (first-time moms with single, normal pregnancies), the rate dropped to about a quarter of births. Hoag also increased the percentage of women who had vaginal births after delivering previous children by C-section. 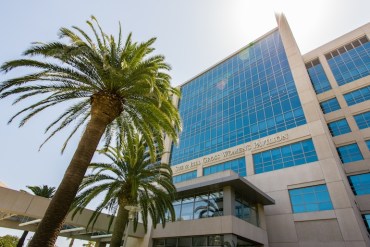 In 2012, Hoag Hospital’s cesarean section rate was about 38 percent – five percent higher than the state average. The Newport Beach hospital has been working to lower the amount of c-sections by stepping up data analysis and patient education. (Photo by Heidi de Marco/Kaiser Health News)

In medicine, this qualifies as a quick turnaround. And the story of how Hoag changed sheds light on what it takes to rapidly improve a hospital’s performance of crucial services, to the benefit of patients, insurers and taxpayers.

Decreasing C-sections results in “better health to mothers and better health to babies and lower costs,” said Stephanie Teleki, senior program officer at the California HealthCare Foundation, which helped fund the data collection and analysis by the California Maternal Quality Care Collaborative. “That’s like a nirvana moment in health care.”

Experts have long been troubled by the wide variation of C-sections among hospitals nationally. (In California, the rates range from 18 percent to 56 percent.)  Certainly there are instances in which C-sections are typically recommended – such as a baby in breech position. But the disparities suggest that decisions are being driven by factors other than medical necessity – such as doctors’ time constraints and malpractice concerns.

Over the past few years, there has been a coordinated push to cut C-section rates in other states and in births covered by Medicaid, the health coverage program for low-income Americans.

Across California, data publicly released by the California HealthCare Foundation, the Pacific Business Group on Health and others in the past few years have underscored the differences in how hospitals handle maternity care.

Despite the increased transparency, however, many hospitals don’t act until dollars are at stake, said Dr. Elliott Main, medical director of the California Maternal Quality Care Collaborative. That’s what happened with Hoag, which Main said is now becoming a model for others.

“In quality improvement, we call it ‘the burning bridge,’” he said. “You can’t just stay still. You’ve got to move.”

At Hoag, where more than 6,000 babies are born each year, Brooks and other administrators knew that they had to focus on changing the mindset and behavior of physicians. “Hospitals don’t do C-sections, doctors do,” she said. 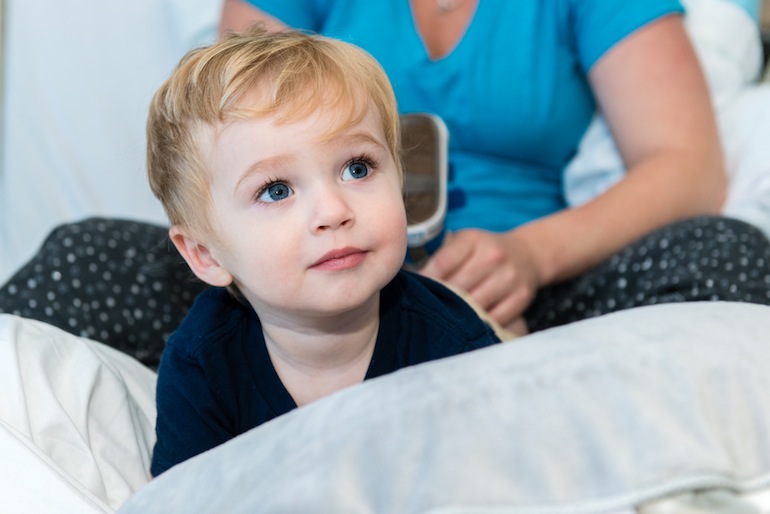 Holly Grim’s son was born by cesarean after a long and painful labor. The Huntington Beach resident said she knew she wanted to attempt a vaginal birth with her second child. (Photo by Heidi de Marco/Kaiser Health News)

So they took some aggressive steps. First, they shared the data with all the physicians in the department without names — then decided to reveal the names. Suddenly, everyone knew who had exceeded or come in under the average.

“There was a lot of upheaval,” Dr. Jeffrey Illeck, a community OB-GYN and the hospital’s obstetrics department chair. “None of us want to look bad in front of our peers. … And some looked horrible.”

Some physicians reacted with surprise and frustration. Initially, many attributed the high rates to the patients, saying they were older, had more complicated pregnancies or demanded scheduled C-sections.

Dr. Amy VanBlaricom, an OB-GYN who delivers about 25 to 30 babies a month, said she wasn’t opposed to sharing the data. But she said doctors were worried that the rates would be used to penalize them rather than to drive improvement.

“It’s very heated,” she said. “We should use this data as an opportunity rather than a polarizing topic.”

VanBlaricom already tracked her own rates, which she said fell in the middle of the pack, and has only seen a small drop since. But she said being aware that Hoag is monitoring the C-sections has changed how she thinks about her practice and has encouraged her to let women remain in labor longer.

That’s what Hoag administrators were aiming for – a realization among doctors that C-sections should not be undertaken lightly. They carry surgical risks, including serious infection and blood clots, and require longer hospital stays.

“Doctors and patients look at cesareans as an easy way to time the birth,” said Dr. Marlin Mills, chief of perinatology at the hospital. “But a C-section is not benign. It’s a big surgery.”

The costs are also well-documented. Surgical births cost nearly $19,000, compared to about $11,500 for vaginal births, according to the Pacific Business Group on Health, an organization of employers that is also working to bring down C-section rates around the state.

The business group worked with the hospital on the financial side. It enlisted the help of some of the biggest local employers, including Disney, and another insurer, Blue Shield, to adjust payments so the hospital didn’t earn more from elective C-sections than vaginal births.

In addition, the hospital set new scheduling rules. In the past, doctors could simply call in with the woman’s due date and schedule the birth. Now, they would have to fill out a detailed form, with some requests needing special approval.

The hospital also stepped up its patient education, encouraging women to wait for labor to come naturally.  If patients did want an elective C-section, they would have to sign an easy-to-understand consent form in the doctor’s office that detailed the risks.

The hospital opened an obstetrics emergency department and gave more responsibility to “laborists,” doctors who were there around the clock to respond to emergencies, monitor women in labor and deliver babies.

Dr. Alex Deyan, who delivered more than 500 babies at the hospital last year, used to turn away patients who wanted vaginal births after cesarean sections. With a busy private practice, Deyan said he couldn’t always be immediately available if labor didn’t go as expected and a woman needed a C-section. That changed with the laborist program.

“Having in-house doctors 24/7 is a huge benefit,” Deyan said. “I can be a little more patient.”

Good for Patients Too

Holly Grim appreciated Hoag’s approach. She knew she didn’t want a C-section with her second baby. Her first labor at another hospital in December 2013 was long and painful and ended with a cesarean section that kept her in the hospital for days. Her son was healthy, but she said, “this wasn’t exactly how I had it planned – not even close.”

This time, she needed to get back on her feet quickly so she could chase after her 16-month-old. She decided to switch doctors and hospitals. And in early April, she got her wish — giving birth naturally to an 8-pound girl, Agnes, at Hoag.

The day after Agnes was born, the family was packing up to go home. She didn’t have any restrictions on lifting or driving, and she wasn’t in severe pain. This, she said, is how childbirth is supposed to be.

“I’m feeling really good,” she said as she nursed Agnes, wrapped in a blanket decorated with pastel footprints. “I’m relieved I’ll be able to run around after my son.”

How One Hospital Brought Its C-Sections Down In A Hurry