EAST LOS ANGELES — Miguel Dominguez didn’t know what to make of the notices he started receiving from the state toxic substances department a couple of years ago. They warned about Exide Technologies, a company he’d barely heard of.

Then a community activist knocked on the door. He explained that Exide’s battery recycling plant – just minutes from Dominguez’s home — had been polluting the air and soil with lead and other toxic chemicals for decades.

At the beginning of this year, state workers tested the soil at his house and found that it was so contaminated it had to be replaced. And officials told him and his neighbors to keep their shoes outside and not to let their children play in the yard or their pets track in dirt. 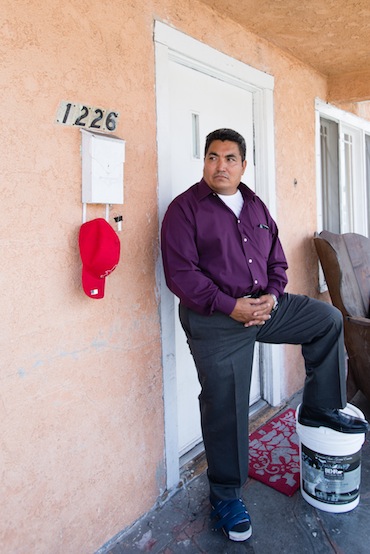 Miguel Dominguez, 51, at his home in East Los Angeles on Sept. 14, 2015. Dominguez is one of thousands of residents that live in the area affected by the Exide Technologies plant contamination. (Photo by Heidi de Marco/KHN)

Dominguez, a 51-year-old small businessman, got angry. He couldn’t believe the state had allowed the company to continue operating despite documented violations.  This would never have happened in Beverly Hills, he said.

“Here the people are more vulnerable,” he said. “What I conclude is that it didn’t matter if we got contaminated.”

Dominguez joined a community effort to shut down the plant – and ultimately it proved successful. But now residents face an expensive and lengthy clean-up, believed to be the largest of its kind in state history.

To many community activists and public health experts, Exide’s history in Los Angeles County stands out as an egregious example of environmental discrimination. The company illegally stored and disposed of hazardous waste for years, placing thousands of low-income, Latino residents at risk of lead poisoning. Even more outrageous, experts said, is that the state of California was aware of the pollution and didn’t do more to protect the community.

“The fact that [Exide] was allowed to operate for so long in violation of basic environmental standards definitely makes it a poster child of environmental injustice,” said Rachel Morello-Frosch, a public health professor at the University of California, Berkeley.

The disproportionate impact of environmental pollution on poor and minority communities is a much wider phenomenon, well documented by researchers.  A recent study in the American Journal of Public Health showed that Latinos and African Americans are far more likely than whites to live in California communities burdened by hazardous waste sites, exposure to pesticides and traffic density.

Across the country, companies have been able to take advantage of disenfranchised communities because of the impression – or the reality — that nobody is paying attention, said Adrianna Quintero, director of partner engagement at the Natural Resources Defense Council.

“Generally it’s a predatory mentality of polluters who know that they are functioning with some level of impunity because so many politicians turn a blind eye,” she said.

In Dickson, Tennessee, for example, poor residents spent years living with water contaminated by toxins leaked from a nearby landfill. Residents of southeast Chicago are still fighting for the removal of nearby piles of petcoke, a waste product from refining oil. And in Baltimore, children in poor, mostly African American neighborhoods continue to absorb toxic levels of lead from paint in old housing – well known to cause learning disabilities and developmental delays.

Rebecca Ruggles, director of the Maryland Environmental Health Network, a research and advocacy group, said it is tough for low-income communities to mobilize because they don’t have the same access to the Internet or media as in more affluent areas, and residents may not have time to volunteer or attend meetings.

“People who do come don’t have the knowledge to push back,” she said.

‘How much are these brown lives worth?’

The primarily Latino residents who live near Exide – in communities such as Boyle Heights, East Los Angeles and Commerce – are not wealthy and don’t have a history of civic involvement. Many are more concerned about feeding their families than fighting environmental pollution. Others are undocumented immigrants, scared to speak up. 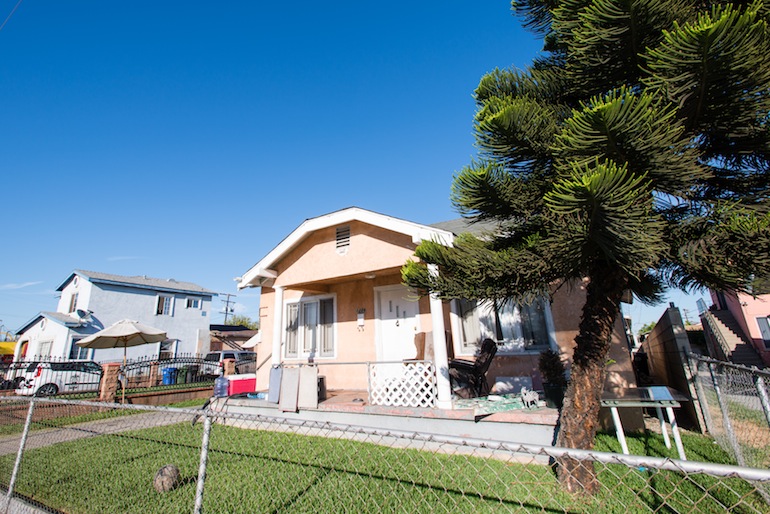 State workers tested the soil at the Dominguez house and found that it was so contaminated the grass had to be replaced. (Photo by Heidi de Marco/KHN)

Despite the battery recycling plant’s presence in the area since 1922, it employed relatively few people and many residents had no idea it even existed.

Jessica Prieto, 23, grew up in East Los Angeles, less than two miles from the plant. As a child, she and her sister played tag and ran through the sprinklers in the front yard. Her parents have lived in the area since the 1970s; her grandparents live across the street.

She said none of them knew about the Exide plant until two years ago, when Prieto graduated from college and moved home. She had studied urban planning at San Francisco State.

Suddenly, she said, “I realized I was living in this place that exemplifies bad planning.”

Once word spread about the dangers of the plant, many activists and residents like Prieto started demanding action. They held protests and rallies. They accused regulators and politicians of not doing their job. 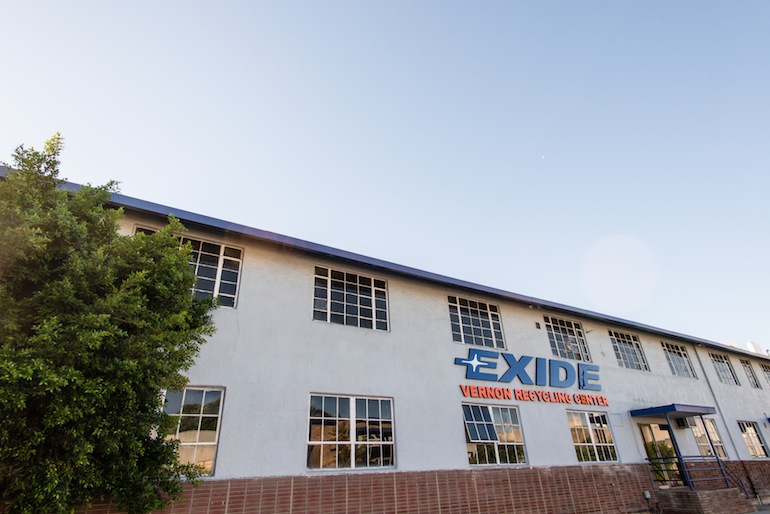 State officials shut down Exide Technologies in Vernon, California, in April due to emissions of arsenic that posed a health risk to more than 110,000 people in the nearby communities of Boyle Heights, East Los Angeles and Commerce, Calif. (Photo by Heidi de Marco/KHN)

This spring, under increasing pressure, the battery recycler shut down.  As part of an agreement with the U.S. Department of Justice to avoid criminal prosecution, the company admitted to producing hazardous waste, including lead and arsenic, and to breaking the laws on safe storage and disposal. Exide agreed to demolish the buildings and help clean up the pollution.

Through a spokeswoman, Georgia-based Exide Technologies declined to comment for this story.

“This was a huge, huge victory,” said Mark Lopez, who heads East Yard Communities for Environmental Justice, a nonprofit that fights against industrial pollution.

Now, Lopez and others are turning their attention to the cleanup.  Residents fear that the state doesn’t have the motivation or the money to do it right.

The state recently announced that tests show the lead dust  may have reached as many as 10,000 homes. Yet so far, just over 150 have been cleaned.

“Lead can have very insidious effects on neurological development,” said Gina Solomon, deputy secretary for science and health at the California Environmental Protection Agency. “That is what makes the community concerned and that is also what makes us concerned.”

The company also emitted excess arsenic into the air, raising the risk of cancer and other diseases for as many as 110,000 people, according to estimates from the South Coast Air Quality Management District. 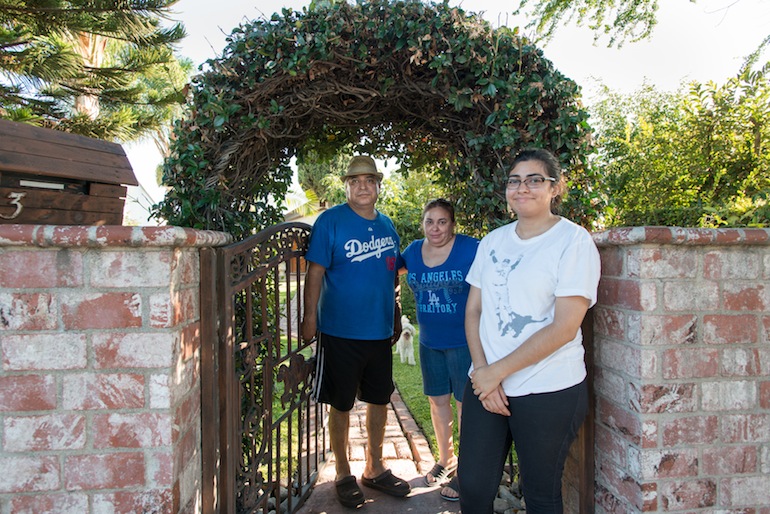 Jessica Prieto and her parents at their home in East Los Angeles on Sept. 20, 2015. The Prieto’s live less than two miles from the Exide plant and are still waiting for their home to be inspected for contamination. (Photo by Heidi de Marco/KHN)

With each home costing between $40,000 and $50,000 to clean up, the total bill could climb into the hundreds of millions. Exide has paid $9 million to decontaminate homes, and the toxic substances department received an additional $7 million from the state for testing and clean-up.

“How much are these brown lives worth?” said Lopez of the East Yard community group. “There is a price to this clean-up. We are being told the money isn’t there, but the question that follows is, ‘Would the money be there for another community?’”

The Department of Toxic Substances Control acknowledges that regulators should have worked together to address the problems at the plant earlier. The environmental violations dated back more than 20 years, and Exide Technologies has operated the plant since 2000. All along, the facility was allowed by the state to continue operating. “All of us could have acted sooner to develop a more complete picture of what the operations of that facility meant to the health of the residents around it,” said Barbara A. Lee, who took over as director of the department late last year.

Lee said the department had tried to shut down the facility in the past but the courts blocked the effort. Armed with new information this year, the agency told the facility it planned to deny the application for a permit. 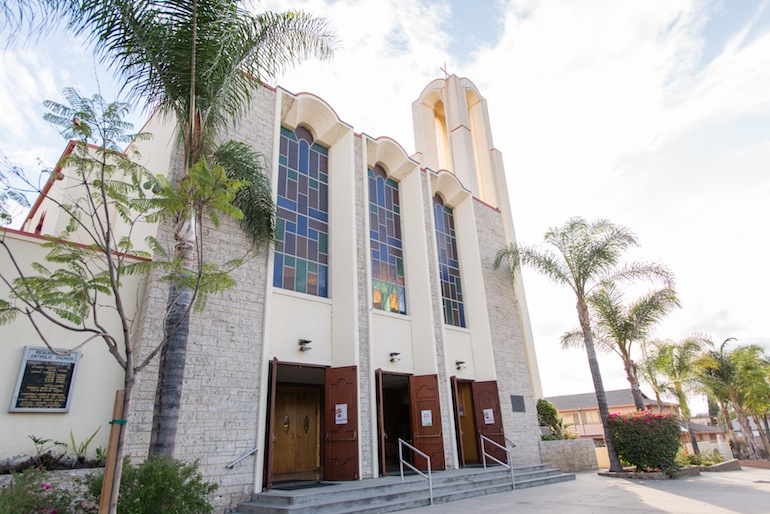 Resurrection Church in East Los Angeles has been a meeting ground for the community. (Photo by Heidi de Marco/KHN)

The department is now figuring out how to safely dismantle the facility and is planning to continue testing and decontaminating the surrounding neighborhoods, Lee said.

Solomon of the California EPA said she understands the community’s anxiety. But she said decades of poor land use decisions and pollution have resulted in unhealthy conditions, and “it is something that is going to take a little while to fix.”

“We are doing the best we can as fast as we can,” she said.

That’s not what Frank Villalobos, 67, wants to hear. On a recent night, Villalobos gathered at Resurrection Church with several other parishioners to discuss Exide and other environmental problems plaguing their neighborhood, including major freeways and busy railyards.

Villalobos urged his fellow church members to write letters to politicians and regulators pushing for demolition of the Exide facility to begin.

Teresa Marquez, 67, said she simply wants the state to decontaminate the rest of the homes. 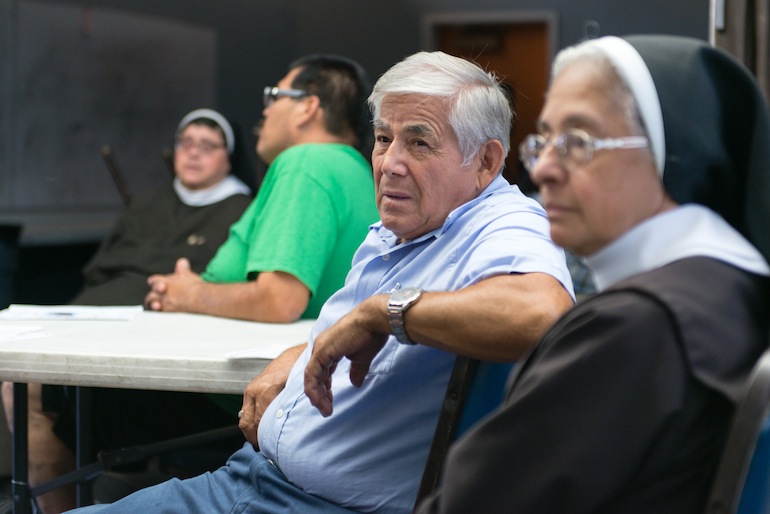 “They need to come in and clean those houses – now,” she said. “In my mind, I see children playing in the yard. That bothers me a lot.”

Resurrection Church Monsignor John Moretta has been one of the loudest voices against Exide over the past few years. He blames the state for failing to ensure the plant was safe and urges the community itself to closely monitor the removal of lead and other toxins.

“We have to be vigilant,” he said. “The clean-up is a big deal. If we don’t keep up with that, then who else will?”

How One Minority Community In California Is Fighting ‘Environmental Injustice’