Skip to content
This story also ran on The Charlotte Observer. This story can be republished for free (details).

CHEROKEE, N.C. — Light pours through large windows and glass ceilings of the Cherokee Indian Hospital onto a fireplace, a waterfall and murals. Rattlesnake Mountain, which the Cherokee elders say holds ancient healing powers, is visible from most angles. The hospital’s motto — “Ni hi tsa tse li” or “It belongs to you” — is written in Cherokee syllabary on the wall at the main entrance.

Profits from the tribe’s casino have helped the 12,000 members of the Eastern Band of Cherokee Indians opt out of the troubled U.S. government-run Indian Health Service. They are part of an expanding experiment in decentralization, in which about 20% of federally recognized tribes in Oklahoma, California, Arizona and elsewhere have been granted permission to take full control of their health care.

For the North Carolina Cherokee, self-governance has meant adopting an integrated care model designed by Alaska Natives to deliver care that not only improves patients’ health, but also is tailor-made for the needs of the tribe. It has meant the opening of a 20-bed state-of-the-art facility in 2015 and the construction of an 18-bed mental health clinic scheduled to open in October 2020.

The hospital is a “medical home for our people,” said Casey Cooper, the hospital’s CEO who is a member of the tribe.

Half of the Indian Health Service budget is now managed by Indian tribes to various degrees. But while full control has worked out well for tribes with resources like the Eastern Cherokee, they are one of just a few bright spots in an otherwise dire medical landscape. It remains to be seen how widely this model can be applied.

“Not all tribal communities have access to the economic opportunities that we have,” Cooper said. “Some tribes are in these desolate, remote locations where there are no natural resources or economic development opportunities. I get that.” 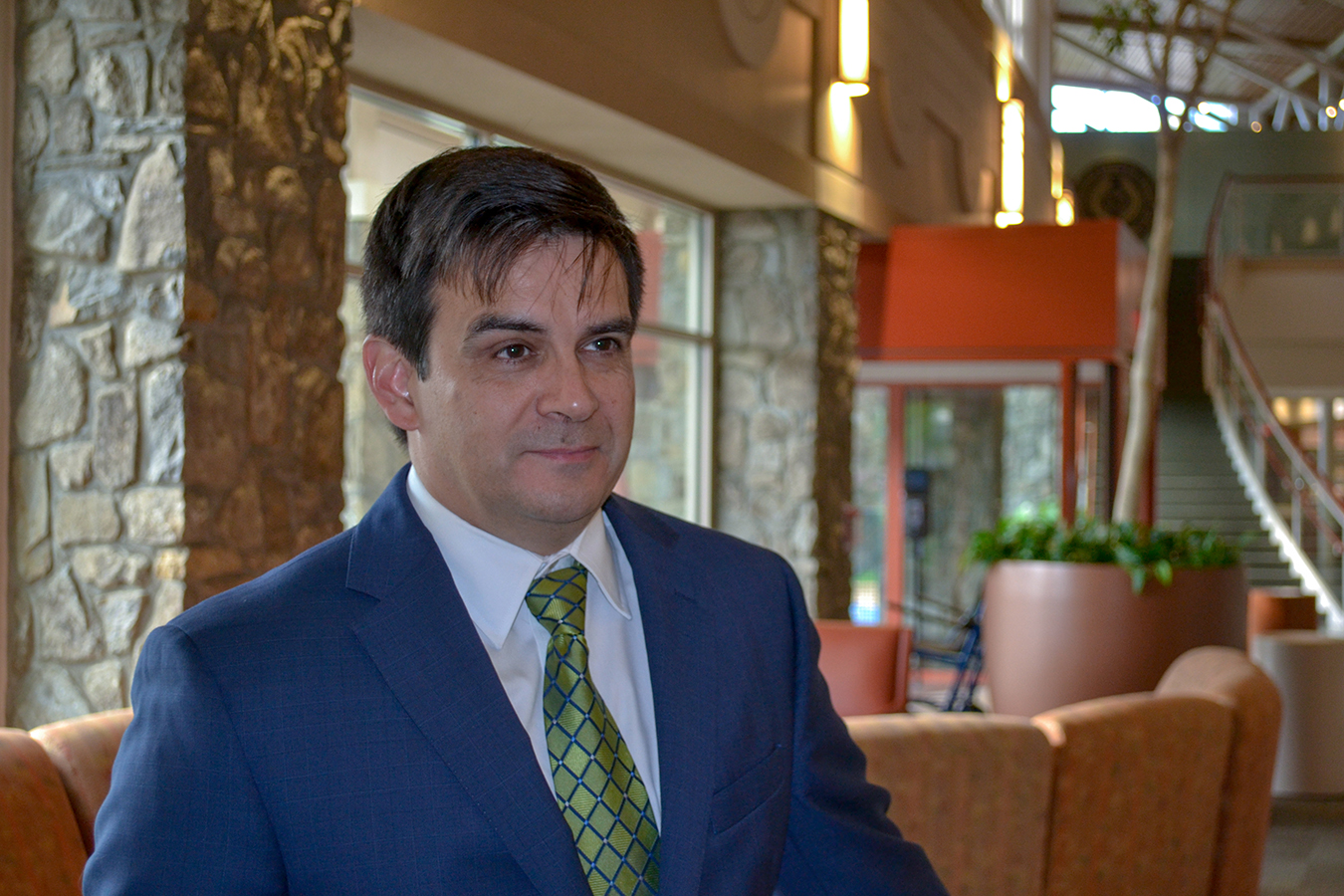 Self-Governing To Change The Narrative

The U.S is legally obligated to offer health services to all members of the 573 federally recognized tribes. Yet the federal Indian Health Service, which currently provides direct care to about 2.2 million out of the nation’s estimated 3.7 million American Indians and Alaska Natives, is chronically underfunded. The current IHS budget is about $5.4 billion, yet the National Indian Health Board estimates the total level of need to be nearly $37 billion.

American Indians are more than twice as likely to get diabetes and six times as likely to get tuberculosis than the average U.S. population. Mental illness, and especially substance abuse, runs high in Indian Country. Native Americans are more likely to commit suicide than any other ethnic or racial group.

Health disparities are particularly harsh in the Northern Plains region. In the Dakotas, average life expectancy among American Indians is 20 years less than among white Americans.

“You do not have to cross an ocean to find Third World health conditions,” said Dr. Donald Warne, a professor of public health at the University of North Dakota and an Oglala Lakota tribesman. “You can find them right here, in the heartland of the United States.”

One particularly grim example is the Rosebud Indian Reservation in South Dakota. In 2015, the Centers for Medicare & Medicaid Services found safety violations at the local IHS hospital so severe that they shut down the emergency room for six months. During this time, at least five patients died en route to other hospitals located sometimes 100 or more miles away. Since then, the situation has only slightly improved.

“The Indian Health Service respects tribal sovereignty and is committed to tribal self-governance,” said IHS spokesman Joshua Barnett. “IHS recognizes that tribal leaders and members are in the best position to understand the health care needs and priorities of their communities.”

Self-governance also allows tribes to be eligible for Medicare, Medicaid, private-sector health insurance, partnerships with larger health systems and even federal grants that are designed for underserved communities — all which can be limited for the IHS. 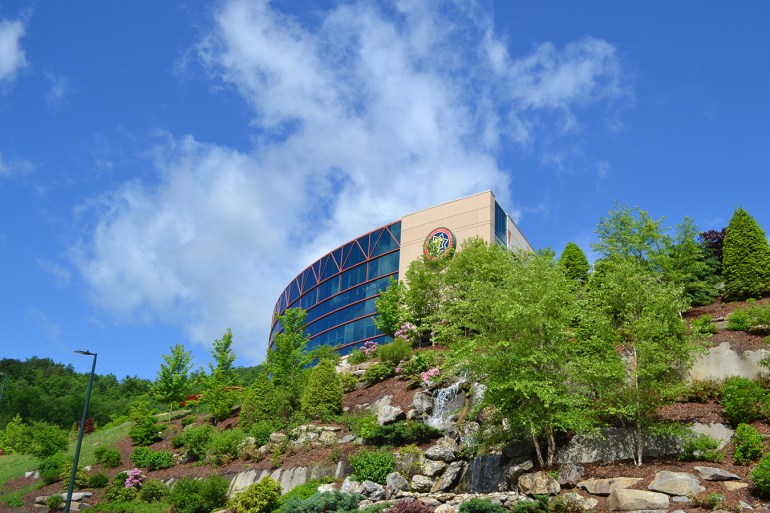 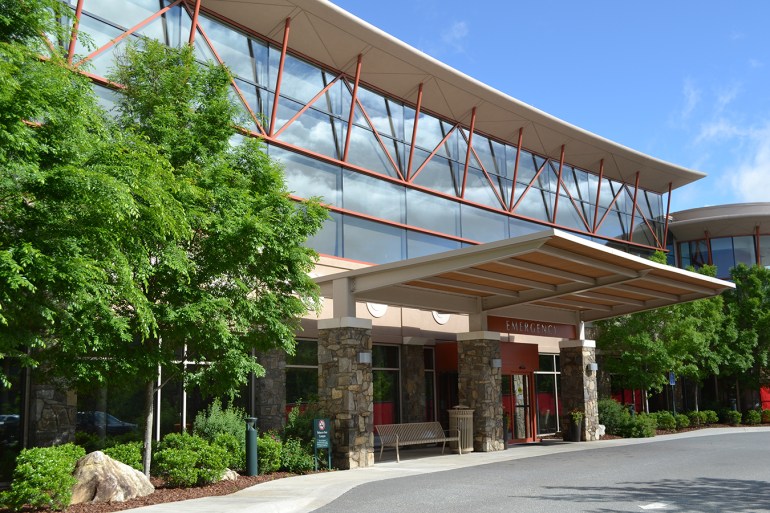 The hospital serves over 12,000 members of the Eastern Band of Cherokee Indians who live on the Qualla Boundary, at the foothills of the Great Smoky Mountains National Park. (Katja Ridderbusch for KHN)

The Cherokee Indian Hospital is lucky to be supported by a tribe that’s economically thriving due to gambling revenues, according to Cooper. The Qualla Boundary is home to Harrah’s Cherokee Casino Resort. It’s a unique situation, said Indian health expert Warne, as most reservation casinos don’t make huge profits.

The hospital’s annual budget has grown from $20 million to over $80 million within the past 17 years. The largest sources are third-party reimbursements, mostly from Medicaid and Medicare, at $27.4 million, followed by IHS contributions and tribal funding.

In 2012, the hospital decided to implement a new, patient-centered approach called the Nuka System of Care, created by the Southcentral Foundation, a nonprofit health provider owned and led by Alaska Natives. A Cherokee delegation visited a Nuka program to see how it could be tailored to their culture and health needs.

“An integrated approach is more consistent with traditional healing,” Warne said. Since “we don’t separate our physical, mental, spiritual and emotional health the way we do in modern specialized health care.”

At Cherokee Indian Hospital, patients are assigned a team, which typically includes a primary care physician or a family nurse practitioner as well as a nutritionist, a pharmacist and a behavioral health specialist.

Rebuilding their health care prompted the need for the new hospital. Gambling revenue covered most of the costs for the $82 million facility. “The old building was outdated and inefficient,” said Cooper, “a constant reminder of the paternalistically provided Indian Health Service.” 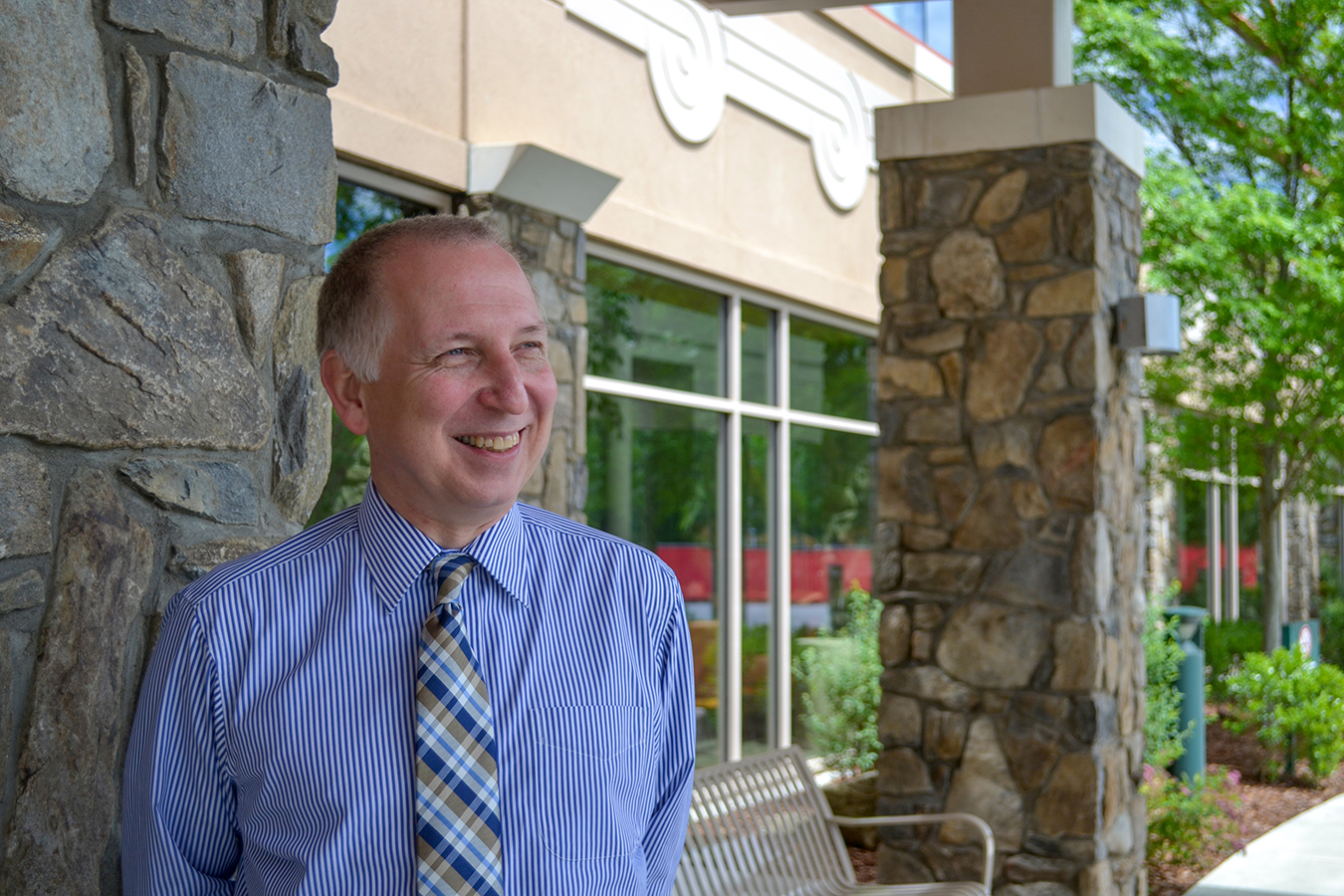 The new hospital’s main concourse — called Riverwalk — tells stories from Cherokee legend through graphics of a winding river, fish and turtles inlaid in the terrazzo floor. Signs are written in English and Cherokee. A literal translation of the emergency room sign is “Get better in a hurry,” and the dental suite is “the place that gives you a big smile.”

Patients can receive dialysis, acupuncture, massage therapy and chiropractic care. The ambulance bay, surgical suite and in-patient unit are located out of patients’ view to reduce anxiety and stress.

“The building really is one big strategic tool,” Cooper said.

Nations, the patient visiting recently, remembers the old days when she and her family, many of them dealing with diabetes and some on dialysis, used to wait for hours in the former hospital, a dark space dubbed “the bunker.”

The 46-year-old said that she’d typically see different providers every visit. “And every time I would have to tell my story over and over and over.” Now, she feels somewhat accountable to her care team — and more motivated to make and keep appointments.

“Back then, if my provider had wanted me to see a nutritionist, for example, I would have probably said, ‘Whatever,’ and forgotten about it,” she said.

“We’re trying to build a relationship with our patients,” said Richard Bunio, the Cherokee Indian Hospital’s clinical director who is Canadian and married to a tribe member. He noted that Native Americans generally have suffered a lot of historical trauma, leading to deeply rooted mistrust of mainstream medicine.

By quality measures, including the widely used Healthcare Effectiveness Data and Information Set, the hospital has recently performed in the top quartile for blood pressure control, blood sugar control and several cancer screenings. Also, Cooper added that in the past four years the diabetes rate in the community has leveled. 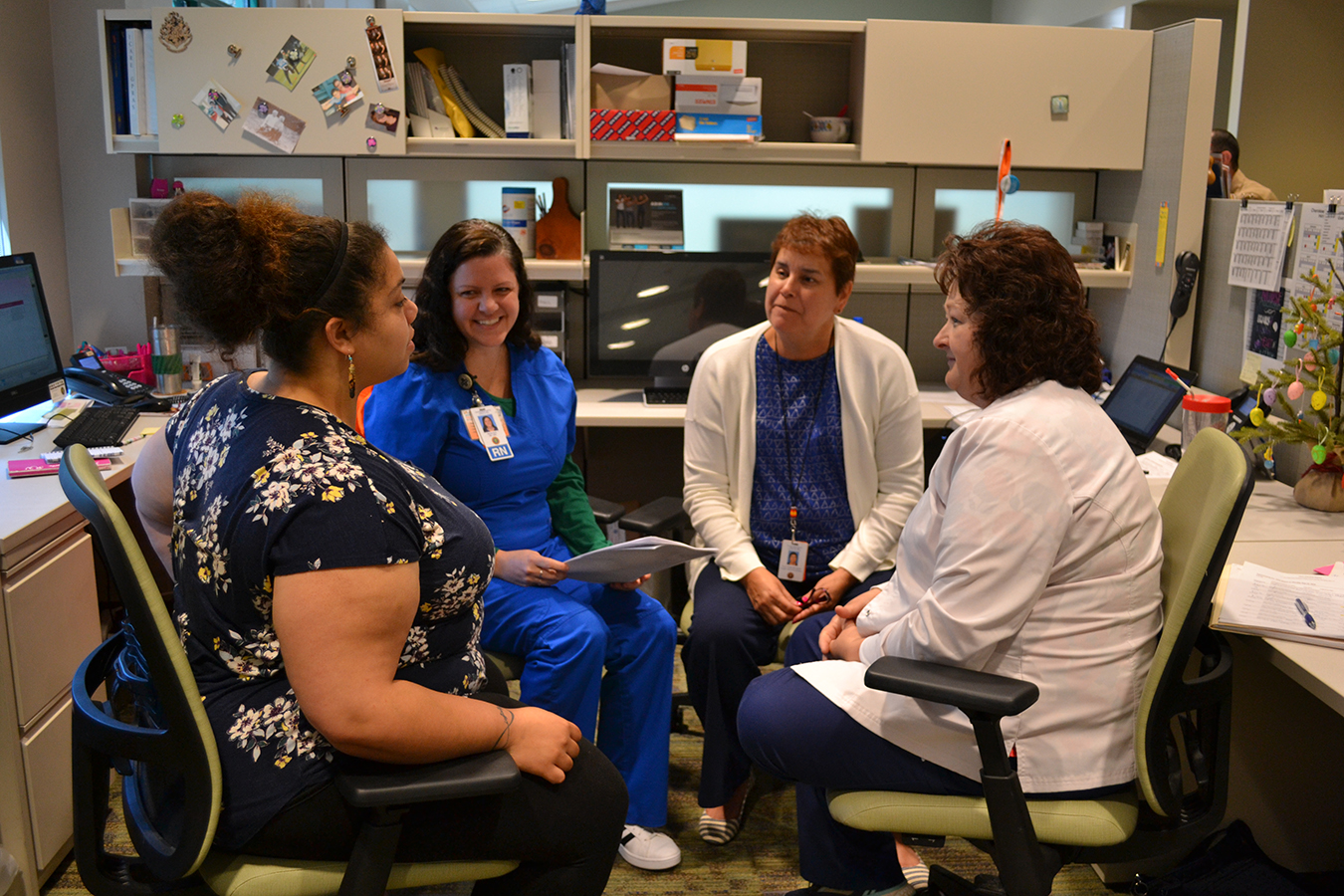 Could It Work Everywhere?

It is uncertain if self-governance would work for tribes such as the Rosebud Sioux or the Oglala Lakota on the Pine Ridge Indian Reservation, where geographic isolation, poverty and a lack of resources make new health care investments difficult.

“It’s a huge challenge, but it’s possible,” said Warne, adding that philanthropy or partnerships with an academic health system might help finance such projects.

Yet many of the South Dakota tribal leaders remain skeptical. They are concerned that self-determination would let the federal government off the hook from its responsibility to provide health services.

Therefore, the Rosebud Sioux took a different route. Instead of just parting ways with the IHS, they sued the federal government for violating treaties. The case is pending in court.

How The Eastern Cherokee Took Control Of Their Health Care