When Martha Powers and Larry Gomberg heard the news about Hurricane Florence bringing horrific winds and catastrophic flooding to Wilmington, N.C., they grimaced.

Then, they felt relieved.

“What if we had decided to build our retirement home there?” they said to each other in September, when the storm was making headlines. “What if our brand-new home had flooded?”

Like many of the 10,000 boomers hitting retirement age each day, Powers and Gomberg are deciding to move now that they’ve retired. After coming close to putting a deposit on a home in Wilmington this past summer, they found a 55-and-over community just 60 minutes from where they live in Fairfax, Va., outside Washington, D.C. They’re building a new home in Lake Frederick, Va., near the Blue Ridge Mountains, and will move there in March.

They examined factors including access to quality medical care, affordability, culture and safety. That includes safety from hurricanes and deadly wildfires, like the ones that gutted the rural town of Paradise, Calif., a popular retirement area filled with senior communities.

After reviewing your finances with a professional, start to build pro and con lists for each potential city or rural area, said Annette Fuller, editor of the magazine and website Where to Retire. “Get past the ‘fantasies’ and evaluate real life,” she said.

During their two-year search, Powers, 63, and Gomberg, 67, kept separate lists. “At first, I thought I wanted to walk on a beach every day,” said Powers. “Larry thought he wanted to live in California. I was trying so hard to like California I was making myself sick.

“Then we visited Lake Frederick again and agreed we liked the people, the location and decided we could still use our same doctors if we wanted to. Suddenly, walking on a beach didn’t seem as important as all those things.”

They visited potential new homes several times and spent the night, research that is invaluable, said Fuller. “Visit the area during every season to make sure the climate suits you,” she said.

And when figuring out costs and affordability, be sure to determine the price of flood insurance and other insurance you might need, depending on the location.

Finding an area that has “zero risk is very difficult,” Fuller said. Asked if retirees should rule out locations where sea levels are rising or wildfires are becoming more destructive, she said: “It’s impossible to answer that with a blanket answer. Many areas of the country have some sort of risk from hurricanes to flooding, to tornadoes, to sinkholes, to wildfires, to scorching heat, to high winds, etc.”

That dangerous reality surfaced in November during the California Camp Fire blaze. Younger retirees who were still driving were more likely to flee to safety, while some older residents with no means of escape were left behind.

That was almost the case for 93-year-old Margaret Newsum, who was standing outside her home with her walker looking for help as the fire approached, according to CNN. She was whisked to safety by Dane Ray Cummings, a garbageman who had been told to cut short his route. Instead of doing that, he looked for people in trouble. He took Newsum home to care for her rather than take her to a shelter. Since the fire, she’s been staying with one of Cummings’ close friends.

Older people are resilient, but Helms said seniors should anticipate changes that might accompany aging. 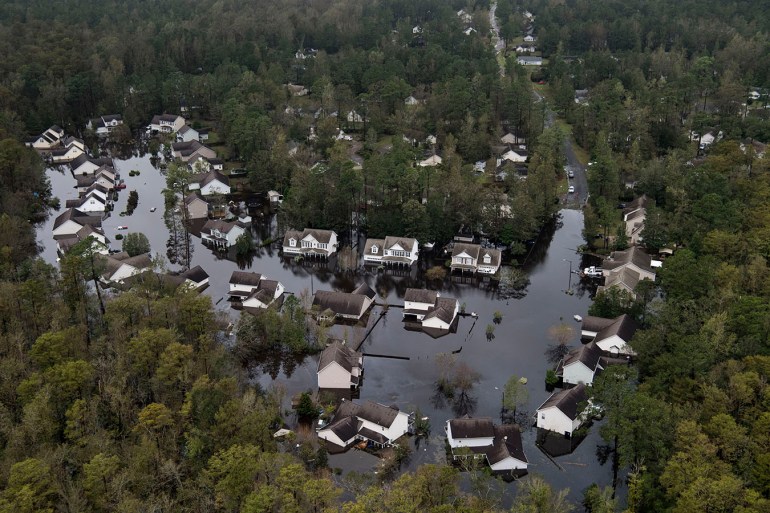 Flooding from Hurricane Florence is seen in Leland, N.C., which is located just outside of Wilmington, on Sept. 17. Martha Powers and Larry Gomberg considered moving to Wilmington for retirement, but ultimately chose a community in Lake Frederick, Va., instead. (Carolyn Van Houten/The Washington Post via Getty Images)

That’s a message Rita Parsons understands. Parsons didn’t want to have to worry about maintaining a home after her husband passed away two years ago. That’s when Parsons, 74, moved to Greenspring Village, a facility in Springfield, Va., with accommodations for independent living, assisted living and nursing home care. Within such communities, residents can move from one level of care to another.

“They take care of everything for me here,” she said. “They come and change the filters in the heat pump twice a year. If a lightbulb burns out in the kitchen, I don’t have to deal with a ladder to change it. All I have to do is call building services. This makes life easy.”

Parsons doesn’t have children and feels very secure about having her doctors on campus and optional nursing care if she needs it. When she first moved in, she said, a bad knee made climbing stairs difficult. “But since I’ve lived here, I walk a couple miles a day, go to the gym and swim several times a week,” she said. “Now, my knee is fine, and I try to use the stairs as much as possible to stay in shape.”

At Greenspring, home to nearly 2,000 residents, she walks to church services and loves square dancing, line dancing, movies and other classes.

“We say it’s a lot like living on a cruise ship, but you don’t have to deal with motion sickness,” she said.

Plus, it’s a tightknit community. “I had lived in a condo at one point in my life and never got to know my neighbors,” she said. “One of the best things about living here is everyone looks out for each other.

Powers and Gomberg expect to age in place, too. If they can no longer live independently at Lake Frederick, Gomberg said, they will have the financial resources to move to an assisted living facility.

“We’ve visited several of them, and we know they’re not for us yet,” he said.

“Then when we toured Lake Frederick — we knew it was right. Many people there are just like us, professionals from the D.C. area, well-educated and liberal. We knew we’d have lots to talk about with them. We also liked the layout of the homes. We have plenty of space, and I found my man cave.”

[Correction: This story was updated on March 13 at 8:45 a.m. ET to correct the ages of Martha Powers and Larry Gomberg.]

How To Zero In On Your Final, Forever Home While Skirting Disaster