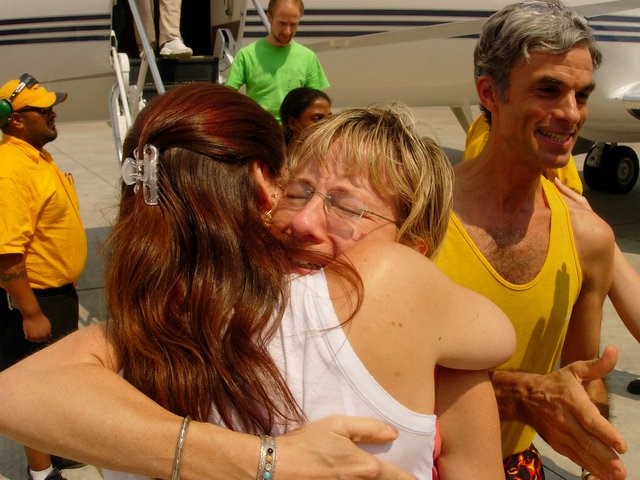 Dr. Ruth Berggren (center) and other staff from Charity Hospital in New Orleans were evacuated to Fort Worth, Texas, six days after Hurricane Katrina hit Louisiana in August 2005. (Courtesy of Ruth Berggren)

As Dr. Ruth Berggren digests the calamity affecting her new home state of Texas, she admits to some PTSD.

In 2005, she was an infectious-disease doctor at the nearly 3,000-bed Charity Hospital in New Orleans, one of a small number of physicians left managing patients and performing triage in the wake of Hurricane Katrina. She spent weeks and months dealing with the aftermath, before moving to Texas, where she heads the University of Texas-San Antonio’s Center for Medical Humanities and Ethics, part of its Health Science Center.

As Houston begins assessing Harvey’s impact, she’s “constantly comparing and contrasting,” she said. After all, Berggren remembers the power outages and the lack of clean drinking water. She knows firsthand the trauma suffered by the medical personnel trying to keep people healthy under devastating circumstances.

“I remember what it was like to be standing on the balcony of the ninth floor of Charity Hospital looking out over the floodwaters,” Berggren reflected.

This time around, she has been volunteering at a makeshift clinic in a San Antonio middle school, once again treating victims of the storm — elderly patients who had lost their walkers, and people who in the rush to evacuate had forgotten medicines (or perhaps lost track of when they last took a dose).

Storms such as this place a heavy burden on the local health system. Hospitals such as Houston’s Ben Taub Hospital, a Level 1 trauma center, worked to evacuate patients, even as food shortages and flooded streets promised complications for people trying to deliver refuge and health care.

But Berggren has also seen improvements. Harvey is the first major storm since the federal government revised emergency preparedness standards for hospitals, in response to Katrina and 2012’s Superstorm Sandy. Now, health care providers that receive Medicare or Medicaid dollars must have disaster preparedness plans, including relocation strategies for at-risk patients and mechanisms to maintain basic power.

Berggren shared her distinctive perspective last week, drawing on her knowledge of Texas, her memories from New Orleans and knowledge as one of the country’s leading bioethicists. The following transcript has been edited for length and clarity.

Q: What kind of burden does a storm like this one place on local hospitals, and on the health care system?

The first responders are always the people there locally. They’re being affected by the disaster at the same time as the population is. You have sort of a dual role.

Where I saw this burden take its biggest toll was two or three days into the post-Katrina storm, at Charity. The people who had the hardest time were the folks who didn’t know the safety or whereabouts of or well-being of their loved ones.

All the health care providers in Ben Taub now, and other hospitals caring for patients that had to be left behind — this is a very stressful and difficult time.

Q: Does that affect what kind of care they give, while seeing potentially increased need?

You have to start working with much more limited resources. There’s going to be limitations in communications. We’ve already heard about looming limitations for food. Water has been OK, power has been OK — so those are two factors that weigh heavily in Houston’s favor. After Katrina, we lost power. We really didn’t have the ability to use our water supply. It was, in that respect at least, more dire.

However, as the days go by, the rains continue, the flooding continues — supplies are going to run out. There are going to be a lot of logistical hurdles.

Q: Hurricane Katrina shone a spotlight on some of these challenges that can arise at a hospital navigating a natural disaster — are there lessons you think people learned that we’re maybe seeing applied here in Harvey? 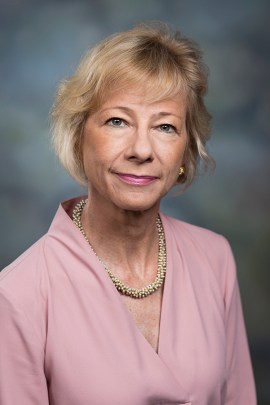 It does look like they were far better prepared, with regard to having protection for their power supply and for water in these hospitals.

You can never really be fully prepared. What I recall before Katrina is there was kind of a set of misplaced priorities. We had to all undergo about four hours of training about sexual harassment in the workplace because Tulane was worried about that that year in particular — and had had exactly zero hurricane preparedness. We didn’t even know what Code Gray was.

I think that whole region along the Gulf Coast is much more attuned to the fact that we have to prioritize educating health professionals about disaster preparedness. I see better preparedness in the medical community and I like to think that’s part of the Hurricane Katrina legacy.

Q: What challenges should we expect in the storm’s wake?

There are always going to be vulnerable people, disenfranchised groups of people. If they’re not gotten out and they become further deprived of food and shelter and having their basic needs met, you’re going to see, unfortunately, I fear, the potential for violence. We had the experience at Charity Hospital of getting shot at by snipers, and we never knew who they were. We assumed they were disenfranchised people who had become desperate and been deprived of food or perhaps medication.

It’s going to be very hard to get regular services back up and running. I would say mental health is going to be a big problem. We saw a number of suicides in New Orleans after Katrina. People have a bit of a sense of despair when they become aware of the scope and scale of the disaster.

Post-Katrina it took many, many, many months to see the mental health counselors and psychiatrists return. I would hope that in the intermediate-range and long-range planning for disaster recovery that mental health is given a really high priority.

Next, I would worry about some infectious-disease issues. There’s a lot that’s been written about Houston’s risk for a Zika outbreak. Of course, the way you combat Zika is you get rid of standing water — and what does Houston have right now?

Lots of standing water! They have had a superb proactive public health response up until now. I only hope the state continues to support that.

We have a lot of people living with chronic illness in general. When it’s tuberculosis, when it’s HIV, those people need their medications on a regular schedule, without interruption.

There were a lot of logistical hurdles in New Orleans, post-Katrina, in keeping patients on their full HIV regimens and full tuberculosis regimens. My patients with AIDS and tuberculosis, who were evacuated without their medications — it took a long time before they could get to a place where they really felt they could confidently tell their health care providers what their needs were.

I had AIDS patients contacting me and saying, “Is it OK if I take my pills every other day to make them last longer?” And that’s exactly what you don’t want to do.

Q: With people saying recovery will take months and even years — what sort of long-term impact might we see on the health system in Houston, and on local public needs?

Physical infrastructure will take time to repair, but you can still provide funding to help people access care.

One vulnerable group that I would like to highlight is pregnant women. Between 2010 and 2014 we saw a 79 percent increase in maternal death [in Texas].

Houston doesn’t have to have all the floodwater evacuated and the buildings pristine to provide health care to vulnerable people.

Q: Having moved from Louisiana to Texas, what is it like for you watching another hurricane play out in your new home?

Disasters bring out the best and the worst in people. We always want to look to criticize and identify the mistakes, but these are also opportunities to see how good we really can be.

The capacity of our people to take care of one another and to rise to the occasion and to go beyond themselves is just so inspiring.