Alone in her apartment, in the middle of the night, Sylvester didn’t know what was happening to her body. She feared it was COVID-19. Her neighbor and twin sister, Edna Mayes, had no idea her best friend was in trouble.

“I couldn’t get to the door,” said Sylvester, recounting last month’s incident. “I was shaking, just shaking.”

Paramedics rushed her to St. Louis University Hospital where the staff determined that Sylvester had “no signs” of COVID-19 but instead had a case of high blood pressure and anxiety.

Now, Sylvester’s children say the trauma of living through the pandemic has taken a toll on their mother’s mental health. The onslaught of coronavirus news and warnings had consumed Sylvester’s thoughts, her daughter Ruth Sylvester explained.

Because watching the news made the twins upset, they stopped. Still, the fear of contracting the virus continued to overwhelm Sylvester.

She tried to toss medicine into her mouth without touching her face. Instead of sipping water from a cup or using a straw, Sylvester said, she poured it down her throat to avoid contact with her dishware, and somewhere along the way she decided that canned soup was the safest thing to consume during the pandemic.

In need of more nourishment, she became weak. She weighed 113 pounds when she was released from the hospital in March. Her daughter Myra Ward said her mom had lost about 15 pounds.

“I wasn’t eating because I thought that’s what you’re supposed to do,” Sylvester said. “I wasn’t washing my face or nothing like that.”

She had reason to be worried. Older people are dying of COVID-19 at higher rates worldwide. And, in Illinois, people of color like Sylvester and Mayes, who are black, accounted for at least 48% of confirmed COVID-19 cases and 57% of deaths as of Wednesday, while making up only 39% of the state’s population.

But Sylvester desperately needed help. The paranoia itself was what was hurting her, she and her family now say.

Her twin sister, Edna Mayes, noticed how excessive Sylvester’s cleaning regimen had become. Sylvester, a former housekeeper who’s always kept a tidy house, admitted she couldn’t stop wiping things down. Every time she touched her remote control, for example, Sylvester would clean it, then wash her hands.

“Ethel would go overboard,” said Mayes, sitting next to her sister. “She’s still doing it.”

By the time Sylvester’s daughters traveled from Texas to check on her health, Sylvester’s hands were worn and dry from constant washing. Her daughter tried to rejuvenate them with oil.

“She was extremely paranoid,” Ward said. “She didn’t know what she could touch.”

Sylvester’s anxiety is not uncommon. Nearly 50% of Americans feel anxious about the possibility of contracting COVID-19, according to a poll released last month by the American Psychiatric Association. More than 60% are worried about friends or family members becoming infected.

As COVID-19 continues to spread, Sylvester doesn’t want to replace the in-home care worker she lost a few months ago because of concerns about having a new person in her home. And her sister might lose her regular care provider amid uncertainty in the home health care industry.

So these two sisters are also relying on family and each other, just as they’ve done since they were children, while community volunteers and health professionals in East St. Louis come up with a game plan to help seniors and families in need.

“Our daddy denied us, so, coming up, we had to be close,” Mayes said. “We’d love each other if didn’t nobody else loved us.” 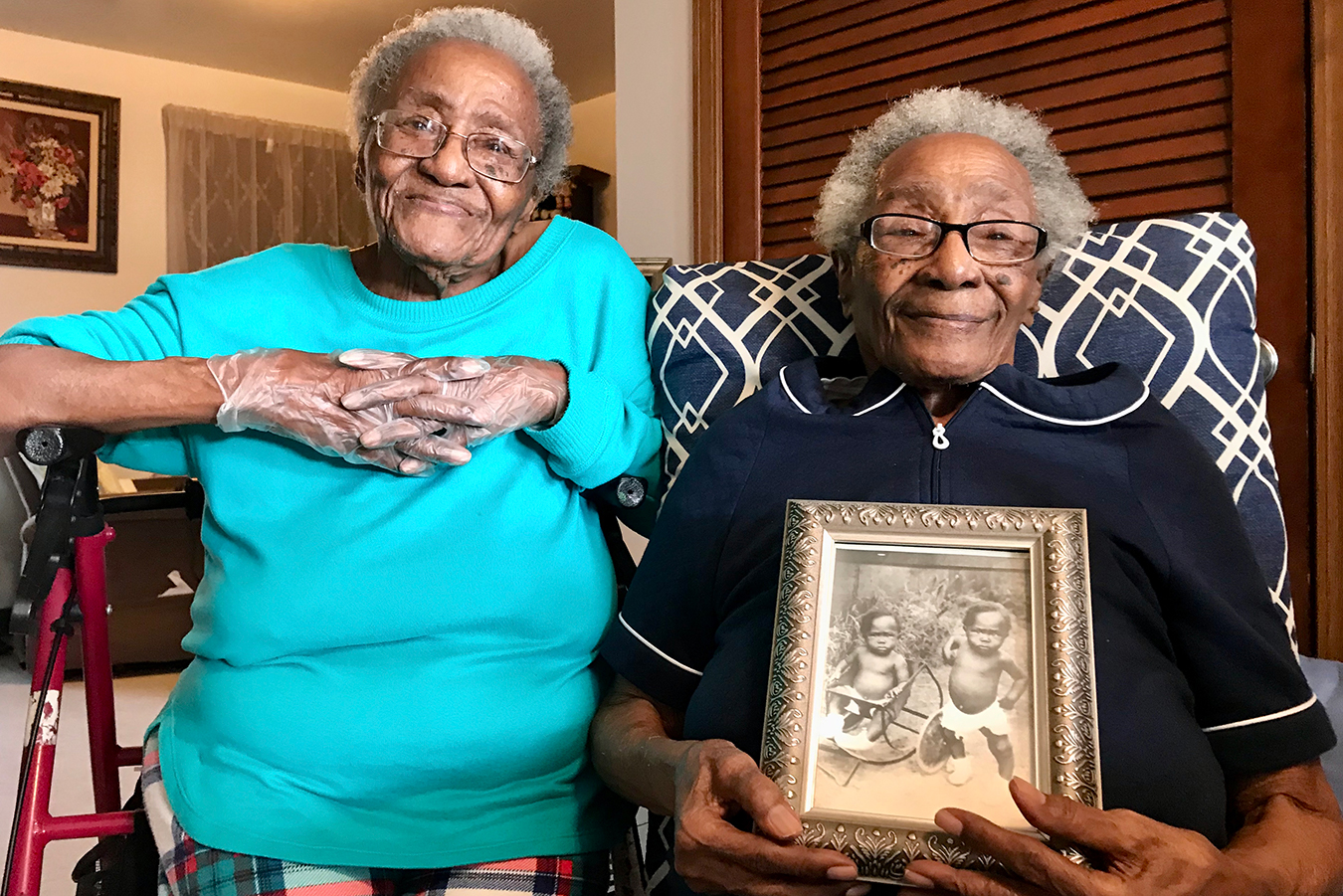 Ethel Sylvester holds a photo of herself and her twin sister, Edna Mayes, as children.(Cara Anthony/KHN)

Their mother taught the twins to look out for each other. The sisters became neighbors two years ago when Mayes moved into the public housing complex that Sylvester has called home for more than 60 years. Their version of FaceTime doesn’t require a camera. Instead, Mayes walks to her back door when they’re on the phone. That way they can wave at each other.

“We love each to death,” Sylvester said. “We’re normal, healthy twins. We never hit each other, never cuss each other. We have disagreements. We never went to bed mad.”

Lately, sleepovers have solidified their bond. Mayes spends the night in a chair at Sylvester’s apartment, watching over her sister as she regains her strength. A neighbor takes the day shift.

A granddaughter cooks for them each week. And Sylvester’s 63-year-old son, Sanchez Sylvester, who also lives in the same housing complex, helps them with food, too, even though he has underlying conditions that put him at risk.

Sanchez Sylvester said he understood how concerned his mother was the day she tried to disinfect him with bleach and water as he entered her house.

“She said, Hold it right there,” her son recalled. “She sprayed me!”

That’s why he’s trying to point out positive stories of recovery to his mother and aunt.

His sister, Myra Ward, meanwhile, said she often offers to relocate her mom and aunt from East St. Louis to San Antonio, Texas. The sisters always turn down the invitation.

They don’t want to leave East St. Louis or the Samuel Gompers Homes public housing complex that is home. But as a longtime advocate for residents of East St. Louis, Ethel Sylvester hopes more people will take time to listen to the needs of seniors long after the pandemic ends.

“With all of this stuff going around, we old folk feel lost,” Sylvester said. “We don’t know where we are going and we don’t know what to do.”