EAGLE, Idaho — On Election Night, Bill McCarrel Jr. watched teary-eyed residents crowd into his historic bar, The Gathering Place, after President Barack Obama won a second term. His customers worried aloud about losing access to their guns and having to accept the federal health law that many revile as socialized medicine. 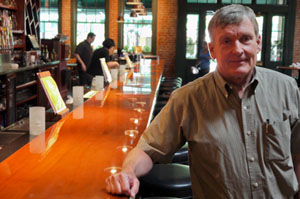 Kevin Settles, owns Bardenay, a restaurant-distillery in Boise. Settles pushed for a state-run exchange over a federal one because he believe it can help keep costs down (Photo by Phil Galewitz/KHN).

Like most people in this fiercely Republican state, McCarrel opposes Obamacare — even though he’s uninsured and can’t find affordable coverage as a result of his artificial hip and knees. But the former junior high principal is looking forward to shopping on the Obamacare online insurance exchange starting in October to see if he can get a plan he could afford.

McCarrel, 55, is thankful the Idaho legislature — prodded by Gov. C.L. “Butch” Otter and powerful employer groups — decided to have the state operate the exchange rather than leave it to the federal government. “People in Idaho don’t trust the state government, but they trust Washington D.C. even less,” he says in his spacious bar housed in a former drugstore built in 1906.

Of the 16 states that are gearing up to operate their own online marketplaces — a central feature of the effort to expand coverage to millions of people starting in January — Idaho is the only one where Republicans are in total control of state government. Republicans outnumber Democrats 4 to 1 in the state Legislature and only a third of Idahoans voted for Obama last fall – the third lowest tally nationwide.

Nonetheless, employers and Otter, staunch opponents of the law, were able to convince tea party activists and other critics that having the state run the marketplace where individuals and small businesses shop for coverage could result in less expensive premiums — and keep control in Boise.

“In Idaho, people have a fierce resolve to do things themselves. … We want to prevent ceding any more control to the federal government than is necessary,” says Otter, who  credits business leaders — along with hospitals, insurers and other stakeholders — for putting pressure on legislators to approve a state marketplace.

Alex LaBeau, president of the Idaho Association of Commerce & Industry, the state’s most influential business lobby, argued the state could better control costs, offer more choice and preserve the role of agents and brokers. 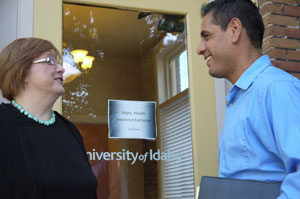 “The business community always prefers to work with state government as our state agencies always pick up the phone when we call,” LaBeau says.

As Idaho races to launch its exchange this fall, the state will face the added challenge of trying to persuade a citizenry known for its anti-government leanings. Exchange officials are hopeful an education campaign using direct mail, billboards, churches and websites like Facebook and Twitter, among other things, can help them overcome doubts about participating.

“There is an independent spirit of Idahoans and we are rising to the challenge,” Amy Dowd, the exchange executive director, says in her office across from the Capitol. The office is so new that the sign on the front door is written on 8 x 10 paper, the cream colored walls are bare and printers sit in their boxes.

Working with a $20 million federal planning grant, the exchange has plenty to do to be ready to open for enrollment Oct 1, with coverage to take effect Jan. 1.  By mid-August it hopes to choose a name, a website address and a logo. It also must train insurance agents and other groups how to use the site, and state regulators must approve the health plans.

A lot is a stake. About 200,000 of Idaho’s 1.6 million residents will be eligible to buy coverage in the exchange which will also sell insurance to small businesses. While the state has some of the lowest insurance costs in the nation, it has an 18 percent uninsured rate, higher than the national average.

Blue Cross of Idaho has already launched a web site called GetcoveredIdaho.com to publicize the new exchange and plans to work with community groups, local colleges and the state’s library system to promote it. Spokeswoman Karen Early said that like residents in most states, Idahoans are confused about how the exchange will work.

If the exchange is successful, proponents — including some Republican lawmakers and employers — say it could help persuade skeptical lawmakers to expand Medicaid, the other central piece of Obamacare, expected to come up again next year.

Rep. Fred Wood, a retired emergency room physician who heads the Idaho House Health and Welfare Committee, says lawmakers came to the realization this spring they could no longer fight Obamacare. “The fact is, that gig is up and it’s going to happen, so let’s make sure we do it our way, not someone else’s way,” he says.

Wood’s daughter, Ashley, is one of nearly 300,000 uninsured state residents. She works as a bartender nearly 40 hours a week at Bardenay, a restaurant-distillery in downtown Boise, but has not been offered coverage. “I worry about it as I’m now 30 and getting to the time in my life to have babies,” she says as the weekday lunch crowd gathered.

She says the lowest price insurance she’s found is $175 a month and that’s too expensive for her. She hopes to find a better price through the exchange.

Employers with more than 50 full-time employees like Bardenay owner Kevin Settles will be required to offer coverage under the health law beginning in 2015.

Settles, who is on the exchange board of directors, says the mandate would require him to offer insurance to about 60 employees, including Wood.

Despite the one-year delay in the employer mandate, Settles plans to extend coverage to all his full time workers next year. “I am tired of the uncertainty and it is a benefit I would like to provide — if it’s a benefit I can afford.”

The only industry group to oppose the state-based exchange was the Idaho Farm Bureau, which represents 15,000 farmers and ranchers. But spokesman John Thompson says he expects many members to be willing to buy coverage on the exchange despite their ideological opposition. “If it makes economic sense to them, they will do it,” he says.

Jim Grissom, an embroidery store owner in downtown Boise, is waiting to see.

Grissom, 55, doesn’t like Obamacare, particularly the mandate that requires most people to have insurance. He says he spends $700 a month on coverage now because his wife insists on it, although he thinks “it’s a waste of money.”

“The nature of Idahoans is we would like nothing to do with the federal government,” he says. “I hope we find something cheaper.”