It’s just that I didn’t know it. Here’s what happened: 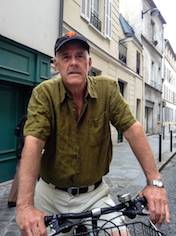 After a few questions he told me to get an MRI scan as soon as possible. In the U.S. that could involve the emergency room (with its hours-long wait) or a complicated process of getting the referral — and then finding a radiologist who would take my coverage. Here in France, it is so much simpler.

But even here, such a lot of bother, I think. My doctor’s away on vacation. Whom do I call? But since I’m now into my fourth day of rainbow hieroglyphics, I bike down to the renowned emergency eye service at Hospital Hotel Dieu, across from Notre Dame cathedral. It has historically served Paris’ poorest residents.

I offer my national health card, and the receptionist brushes it off. All they want is something with a picture ID. Three hours later I’ve been examined by four separate specialists. “You have no serious eye problem,” the retina specialist advises me, “but I agree with your friend at Hopkins. You should get a brain scan,” which they can’t do there. She scrawls out a note to one of France’s top neurology centers.

Back to the bike. I peddle to the Hopital Ste-Anne, a multi-specialty neurology center close to where France’s last guillotine stood.

Sweating, I climb the stairs directly to the glass reception door on the second floor. The head of the clinic smiles, reads the note I’ve brought from the eye doctor and immediately begins some simple tests to be sure I’m not an emergency case.

She taps my elbow, then asks me extend my hands and slowly draw each index finger to my nose. I pass. She asks me when the rainbow squiggles began as she scrolls down her computer screen. It’s 1:15, but I have a lunch appointment at 1:30.

“Go have lunch and come back at 2:30 for your MRI,” she tells me. “Oh yes,” she adds, “you really ought to check in downstairs first.”

At 3:15, I climb onto a gurney and they stuff me into the MRI tube.

At 3:45, I go back upstairs to the nurse’s station. The neurologist is gone. A nurse points to a room across the hall. “You’ll need to spend the night,” she says.

A new neurologist arrives. He’s busy with other patients, but he stops to talk with me for 10 minutes. “I have a flight to Naples tomorrow,” I explain.

“You’ll have to cancel it. You’ve had a cerebral infarctus.” I look at him like a puzzled puppy. “A stroke. You’ll have to stay at least 24 hours. Maybe until next week.”

“Can I go home and get my glasses? I don’t have my phone charger.”

He shakes his head. “We need to run tests to find out why this happened.”

I obey. An hour later I’m attached to a drip, and a half dozen cardiac monitors. Aside from the day of my birth, I’ve never spent a night in a hospital.

At 6:30 a yellow soup and a piece of fish arrive. My roommate, an old man on the other side of the curtain who’s had a bad stroke, gurgles. At 9:00 Christophe, my other, brings my daily pills, my glasses, a toothbrush, and Marguerite Duras’s wartime diaries, but not my phone charger. I’m a journalist, a news junkie — the Malaysian airplane has just been shot down in Ukraine. I fight off panic about being cut off from who and what matters. And it’s hot. Hospitals here don’t have air conditioning.

At 3 a.m. the moon is up; out the window I try to count the number of balconies on the far building.

The next day another neurologist comes in. “We’ll do another kind of MRI this morning,” the neurologist tells me. “If that one is OK, you can go home this afternoon.” Morning turns to afternoon, then to dusk. New emergency cases delay everything. And it’s vacation season.

At 6:30 p.m., I pull on my jeans, decline the evening’s yellow soup and piece of turkey, and ask again about my new MRI scan.

Within a half hour, I’m being told: “It will take an hour to get the readout.” I must return to a new room and wait.

At 9, the night shift nurse comes in: good news. The second scan is clear. I can go home, but wouldn’t I rather stay the night? Merci, mais non. I’m biking home.

No one has asked for a single centime. I won’t have to file paperwork or worry about what I’ll have to pay: the deductibles and the coinsurance and the separate doctor and hospital and radiology fees and how to fill in all the forms.

A week later, neurologists sent me a full write-up along with the brain scan pictures to send to my friend Krakauer at Hopkins. There will be no extra charges for anything. All covered by my health card.

The verdict: Nobody knows why it happened, and it likely won’t happen again. Medicine? One baby aspirin every day at noon. The visual squiggles are probably forever.

If You Have A Stroke, Better It Should Be In Paris