In the years before he started receiving consistent treatment for bipolar disorder, Illinois Medicaid patient Rome Tucker says he often was homeless, riding buses through the night.

When he felt overwhelmed, Tucker often checked into Chicago-area hospitals for days at a time. The hospitals provided structure, support and medicine but at a high price: Tucker’s 16 hospital visits in 2012 cost about $50,000, according to IlliniCare Health, the Medicaid managed care organization that insures him. 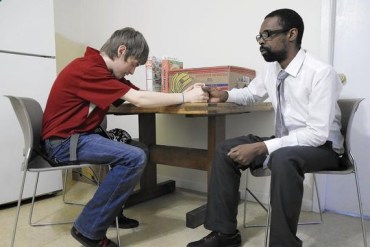 Tucker, 36, now lives in a Blue Island apartment, sees a psychiatrist and takes medication regularly, and is working toward getting a GED. He visited an emergency room only once in 2014, and his care for the year cost about $6,000, according to IlliniCare. For these improvements the insurer credits Tucker’s transition to Thresholds, one of many providers of community-based mental health care in the state that Gov. Bruce Rauner has targeted for budget cuts next year.

Rauner’s proposal would reduce or eliminate funds for psychiatry, housing programs for the homeless and care coordinators who direct people with mental illness to appropriate care. Providers of the services call the proposal misguided, saying it would drive people like Tucker to hospitals, nursing homes, prisons and jails, where treatment costs are higher.

“It is short-sighted, because you’re just going to move people from one system that’s relatively cost-effective and inexpensive into a more expensive system,” said Eileen Durkin, president and CEO of Community Counseling Centers of Chicago. About 135,000 Illinoisans received community-based mental health care services in fiscal year 2014, according to the Department of Human Services.

Rauner’s proposal would cut about $82 million from the department’s Division of Mental Health, a 15 percent reduction, as part of an effort to close a budget gap he estimates at $6 billion for fiscal year 2016. All the governor’s suggested reductions face a long process of give-and-take before the General Assembly puts any of them into effect.

People who qualified for state mental health care services but not for Medicaid can now sign up and get more of their care paid for by the federal government, requiring less funding from the state, said Department of Healthcare and Family Services spokesman John Hoffman.

But Medicaid doesn’t cover some of the services community-based providers say help stabilize people with mental illness, such as funding that helps people get jobs after mental health treatment. They also object to Rauner’s proposal to cut $13 million in funds that support housing for homeless people.

For other services, Medicaid pays too little, providers said. Among the items proposed for elimination is a $27 million “psychiatric leadership capacity grant” that helps pay for specialists like the one who now sees Tucker once a month. Medicaid pays such low rates for psychiatry that many organizations need the grant money to keep psychiatrists on staff, said Josh Evans, vice president of government relations for the Illinois Association of Rehabilitation Facilities.

With fewer psychiatrists, fewer patients will be able to get psychiatric care, whether or not they are on Medicaid, he said.

“We would be taking so many steps backward with the cuts that are on the table,” said Heather O’Donnell, Thresholds’ vice president of public policy and advocacy. “We weren’t a strong sector before and we would be a shell of that.”

Illinois cut spending on mental health by $187 million from 2009 to 2012, the fourth-largest reduction by percentage among states during those years, according to the National Alliance on Mental Illness.

Psychiatric and substance-abuse hospitalization increased by about 19 percent over those years, according to a Thresholds analysis of data from the Illinois Hospital Association.

The state does not directly reimburse managed care organizations for each medical service Medicaid patients receive, IlliniCare spokeswoman Lindsey Artola noted. Instead, the organizations receive per-patient payments based on a variety of factors. The rates are adjusted each year based on total costs, and more expensive patients will eventually drive up costs to the state overall.

The state is paying IlliniCare $966 per month for Tucker’s care this year, up from $890 per month in 2013. But costs can shoot up immediately if a patient with mental illness begins receiving care in a nursing home or similar institution. Artola said the state would pay $5,934 per month if Tucker were admitted to a nursing home.

Another outcome for patients is jail or prison. About a third of people who enter Cook County Jail each day are mentally ill, and the county pays about $143 per day for each inmate, said Cook County Sheriff Tom Dart.

“It doesn’t make sense to cut service that prevents people from coming into the criminal justice system, which is a very expensive system to come into,” Dart said.

About 11,400 of the 48,000 inmates at the Illinois Department of Corrections receive ongoing psychological or psychiatric services, according to a department spokeswoman. Illinois spends about $38,000 per year on each inmate, according to an analysis by the New York-based Vera Institute of Justice.

Hoffman, of the Department of Healthcare and Family Services, said the state’s new managed care system encourages insurers to coordinate patients’ care and find ways to provide some of the mental health services the state is reducing.

Thresholds took on 50 of IlliniCare’s most complex mental health patients, including Tucker, in a 2013 pilot program. Over a year, hospital admissions among the patients fell by 50 percent and psychiatric inpatient care costs declined by 63 percent, Artola said. IlliniCare has since expanded the program.

Tucker said that in the past he sometimes chose to be homeless, rejecting offers to stay with his sister and her three children.

The organization determined Tucker was visiting hospitals because of “medication noncompliance” and started delivering his medicine to him, Watkins said, along with providing psychiatric services and group counseling sessions.

The hospital visits didn’t immediately stop when he started receiving services, but Thresholds staff encouraged Tucker to work toward his goals, one of which was to get away from the West Side. He moved in October 2013 to the Blue Island apartment, where he started receiving more intensive services and participating in group activities with other Thresholds clients at a nearby center.

He still struggles with drinking, he said, but takes his medicine regularly and believes he has left the rest of his West Side life behind him.

“This is a nice way,” he said of his treatment. “It keeps me out of trouble. It keeps me really focused.”