Keith Kelly knew buying health insurance would be complicated. So the 55-year-old Naperville man skipped the federal enrollment website and asked for help from someone he knew: an insurance salesman.

Kelly told insurance agent Robert Slayton about his underactive thyroid, his need for a chiropractor and other health specifics. After a briefing on deductibles, copays, drug costs and other insurance provisions, Kelly and his wife settled on a Blue Cross Blue Shield plan for which the couple pays about $700 per month. 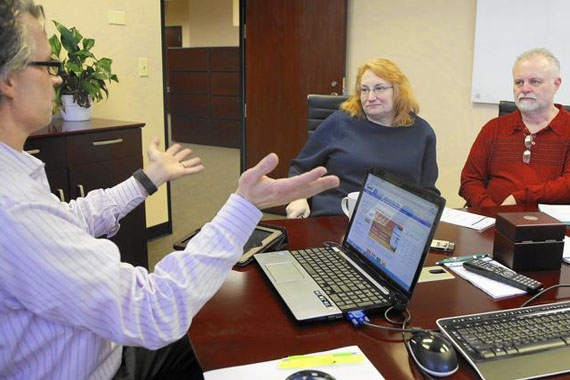 “There are so many variables, and (Slayton) put them into easily understandable piles for us to go through and make our own informed decisions with his help,” Kelly said.

Insurance agents have so far played a limited role signing people up for Affordable Care Act insurance in Illinois, where the state has focused on federally funded navigators to inform people about their options and help them buy plans or enroll in Medicaid.

But with future funding for the navigator program uncertain, the state is expanding the role of insurance agents in its outreach efforts.

Unlike navigators, insurance agents can ask people specific questions about their health and then recommend a specific plan or insurer. Insurers pay agents a commission on plans sold, usually a percentage of the premiums.

Consumers should be aware that creates an incentive for agents and brokers to sell higher-priced plans, said Abe Scarr, director of the Illinois Public Interest Research Group.

“There are not necessarily enough protections in place to make sure that that’s not happening,” Scarr said.

Navigators are forbidden from accepting payments from insurers. Consumers also can compare plans on their own by using the healthcare.gov website.

Agents say their commission on health plans in Illinois is around 6 percent of premiums — much less than they receive for selling other types of insurance. Sometimes insurers pay a flat fee instead.

The financial motivation for agents could help consumers in the long run by boosting the number of people with health insurance, said Barbara Otto, CEO of Health and Disability Advocates, a nonprofit that has been involved in state health initiatives.

For some health insurance shoppers, the specific recommendations agents can offer make it easier to pick a plan, said Slayton, president of Naperville-based brokerage Robert Slayton & Associates and a former president of the Illinois State Association of Health Underwriters.

“An agent can do the same thing (as a navigator), but at the same point in time they can advise the person based on their personal health on what they need,” he said.

Agents can also draw on their experience to help customers pick an insurer, Slayton said. For example, an agent could tell a customer that one insurer typically pays claims more reliably than another.

Agents receive no commission for selling Medicaid plans. They usually refer people who are eligible for Medicaid to navigators, several Chicago-area agents said.

“We still believe, in the majority of cases, that consumers want the assistance of an agent or broker,” Lackman said, while acknowledging that in some parts of the state there are few licensed agents.

The federal government created and funded the navigator program to enroll people in private plans and Medicaid, the state insurance program for the poor and disabled.

Illinois is spending about $25.8 million in federal money on more than 900 navigators’ salaries for the open enrollment period ending Feb. 15. State health officials have applied for money to keep the program going at least through next year’s open enrollment, but it’s unclear how much they will receive, state spokesman Mike Claffey said.

Agents have traditionally helped small businesses manage health care plans and are well suited to reaching the working poor, a population that is important for the health law’s sustainability, said Otto, of Health & Disability Advocates.

Of the 900,000 working-age Illinoisans who became eligible for insurance through the Affordable Care Act’s federal marketplace, only about a quarter signed up during last year’s open enrollment period, according to an analysis of census data by Illinois Health Matters, the research arm of Health & Disability Advocates. About 63 percent of the 900,000 are employed, according to the analysis.

“If we want to reach that population, which is largely the working poor, we have to go to where they’re working. We have to be a little more innovative,” said Otto.

Most of the employed people who are eligible for marketplace plans work for small businesses or franchises, according to a Health & Disability Advocates report.

Making a profit from selling Affordable Care Act health insurance plans is difficult, said George Kleanthis, an agent with Woodridge-based Hartland Insurance Services, which started selling the plans in the current open enrollment period. But selling that coverage helps find clients who might be interested in life, auto, home and other types of insurance that pay higher rates, agents said.

Hartland has taken a similar approach to enrolling clients that navigators have taken — setting up tables at community events, going to churches and schools, holding town-square style meetings focused on health insurance.

“It’s a challenging business to be profitable in, but if you structure properly, and you’re able to scale a business, you can make money,” Kleanthis said.