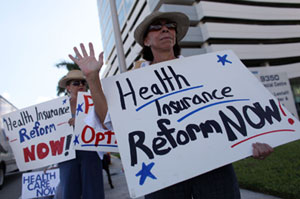 Obama administration officials and wonks call them “early deliverables.” They’re the benefits of the health legislation that would kick in this election year.

The provisions, which could just as easily be called the “Democratic Incumbents’ Protection Plan,” suddenly are everywhere-touted on liberal blogs, on the Rachel Maddow Show, in talking points by Health and Human Services Secretary Kathleen Sebelius.

They’re designed to counter Republican denunciations that the legislation is a government takeover of the health care system that will drain the federal Treasury.

But the question for Democrats is whether promoting the early changes will be more persuasive with voters than the Republican arguments. The answer may determine whether the Democrats retain their majority in the House.

James Capretta, a top budget official in the George W. Bush administration, thinks the Democrats will be badly hurt by the vote. He says he assumes the people who would benefit by the changes before November are in the “single-digit millions,” not enough to have a big impact. “There aren’t enough people in those categories to say, ‘Yes, the increased taxes are worth it.'”

But Chris Jennings, a consultant who was the Clinton administration’s senior health policy adviser, says the legislation includes “many important, immediately available policies that people will care about.” He adds: “If we can’t market them well, then we will have deserved to fail.”

Changes that would occur this year include:

These are among the more than a dozen features of the new health care overhaul law that would take effect in 2010 under the measure passed Sunday. (Although the Senate bill approved Sunday by the House would become law with President Barack Obama’s signature, Senate action is needed to pass a separate measure the House approved that would amend that law.) Other first-year items include a ban on lifetime limits on medical coverage, more oversight of premium increases and tax credits for some small businesses.

The big changes in the law  the ones that could affect tens of millions of people  don’t kick in until at least 2014. Those include insurance marketplaces called “exchanges”; rules requiring insurers to accept all applicants, even those with health problems, and an expansion of state Medicaid programs.

Capretta says that the legislation has big downsides for Democrats, including sharp cuts to Medicare Advantage, a private plan options for Medicare beneficiaries. The benefits in Medicare Advantage plans likely will be pared because the bill includes payment reductions intended to make the program similar to traditional Medicare. Medicare Advantage, Capretta says, “is going to get hammered, and it’s hard to see how they avoid taking the blame.”

“The public is unhappy,” says Stuart Rothenberg, editor of the The Rothenberg Political Report, a nonpartisan newsletter. “The idea that suddenly after the bill passes that Democratic leaders could start talking about it and people would be happy strikes me as Pollyannaish at best.”

Americans have been sharply divided over the legislation  Democrats hope attitudes toward it will swing in their favor as people focus on the details. While some of the more popular elements of the legislation go into effect quickly, some less popular items  such as the requirement that nearly all Americans carry insurance or face a fine  won’t occur until well after the election.

Meanwhile, Republicans are keeping up a steady drumbeat of their concerns, saying the legislation will harm more Americans than it helps by raising government spending in a time of record deficits. Many in the GOP want to build support for repealing the law.

Public opinion of Congress  aimed at both parties — and the legislative process is low. The deal-making to garner votes during the year-long health care debate, such as special payments to specific states, coupled with last-minute maneuvering after Democrats lost their filibuster-proof majority in the Senate, soured voters.

Some of the items that go into effect in the first year include:

New help for some uninsured: People with a medical condition that has left them uninsurable may be able to enroll in a new federally subsidized insurance program that is to be established within 90 days. The legislation appropriates $5 billion for this, although that may not be enough to cover all who apply; it’s not clear how much consumers would pay as their share of the cost. About 200,000 people are covered in similar state programs currently, at an estimated cost of $1 billion a year, says Karen Pollitz, a research professor at Georgetown University.

Discounts and free care in Medicare: The approximately 4 million Medicare beneficiaries who hit the so-called “doughnut hole” in the program’s drug plan will get a $250 rebate this year. Next year, their cost of drugs in the coverage gap will go down by 50 percent. Preventive care, such as some types of cancer screening, will be free of co-payments or deductibles starting this year.

Coverage of kids: Parents will be allowed to keep their children on their health insurance plan until age 26, unless the child is eligible for coverage through a job. Insurance plans cannot exclude pre-existing medical conditions from coverage for children under age 19, although insurers could still reject those children outright for coverage in the individual market until 2014.

Tax credits for businesses: Businesses with fewer than 25 employees and average wages of less than $50,000 could qualify for a tax credit of up to 35 percent of the cost of their premiums.

Changes to insurance: All existing insurance plans will be barred from imposing lifetime caps on coverage. Restrictions will also be placed on annual limits on coverage. Insurers can no longer cancel insurance retroactively for things other than outright fraud.

Government oversight: Insurers must report how much they spend on medical care versus administrative costs, a step that later will be followed by tighter government review of premium increases.

The Immediate Effects Of The Health Reform Bill