When Dillon Pefok agreed to coach a men’s soccer team in Washington, D.C.’s Soccer 4 Jesus church league, it wasn’t his intention to teach the players about the 2010 health law between drills. But the league was brimming with uninsured African immigrants, and he had learned from a training session in March that the law would, among other things, extend Medicaid eligibility to thousands of lower-income people. 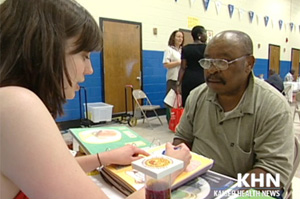 Since then, Pefok has educated soccer players and coaches, as well as parishioners at Dunamis Life Chapel in Largo, where he heads up the men’s ministry.

Pefok is one of many faith and community leaders that the federal Department of Health and Human Services is targeting through a partnership with the Cameroon American Council. Sylvie Bello, a Cameroonian immigrant who heads up the council, approached the HHS Centers for Medicare and Medicaid Services about a year ago. If she identified African events in the area, she wanted to know, would CMS send officials to teach community leaders about the law and other federal health assistance that might be available to legal immigrants?

First Program Of Its Kind

In the past, CMS has worked with the Urban League, the NAACP and other African American groups to get eligible people signed up for public health insurance programs. But this is the first time it is reaching out to immigrants, said Melissa Herd, who does much of the training for CMS.

The goal of the partnership is to arm community leaders with accurate information about Medicare, Medicaid and the Children’s Health Insurance Program “that they can take back to the communities they serve,” Herd said.

As part of the initiative, Herd attended a July health fair at Martin Luther King Jr. Middle School in Beltsville, Md., where hundreds of transplanted Africans rolled up their sleeves for blood tests, consulted with nutritionists and collected freebies from a Walgreens representative. Herd explained the law to a group of physicians, nurses and other community leaders who also attended.

Among Herd’s lessons: The law requires states to make Medicaid available to all people with incomes up to 138 percent of the federal poverty level (just under $31,000 for a family of four) beginning in 2014. Some states will reach this threshold earlier. That includes coverage for a large portion of childless adults who previously did not qualify.

Illegal immigrants still aren’t eligible for Medicaid, but, since 1996, legal immigrants who have been in the United States for at least five years are eligible. In addition, starting in April 2009, states have had the option of lifting the five-year residency requirement for pregnant women and children. 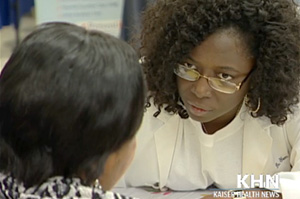 Legal immigrants who haven’t reached the five-year mark still may qualify for income-based premium credits to help them purchase private insurance through state exchanges that will be up and running in 2014. Most people will be required to buy insurance starting that year.

At the same time, Herd explained that people who have had two years of disability or end-stage renal disease qualify for Medicare, the federal program that mainly serves seniors. “It was an eye-opener for a couple of health-care providers here to find out that people younger than 65 can be on Medicare,” she said.

It’s difficult to estimate how many immigrants will become eligible for Medicaid under the law. About 4.4 million immigrants would qualify on the basis of income and their having lived in the country at least five years. However, that number also includes illegal immigrants who are not eligible, which makes a final tally difficult.

Even when immigrants qualify for the medical coverage, they often don’t sign up, because they don’t realize they’re eligible or because they are reluctant to seek out government services of any kind for fear that it might hurt their legal status.

For others, it is a cultural barrier. In Africa, “if you’re sick, you go to the hospital, they treat you for a fee, you pay the fee and your duty is done,” said Martin Ojong-Ntui, an oncologist at George Washington University Medical Center, who was born in Cameroon. When Africans come to the United States, they keep that mindset. “What they are interested in when they are looking for a job is overall dollar amount. … If you tell them they have to pay $200 to get a [health insurance] benefit, they would rather take that $200 home.”

Because it is difficult to know how many uninsured immigrants will enroll in Medicaid, it is hard to estimate how much these changes will cost the federal government. Moreover, the cost for covering individuals on Medicaid depends on an individual’s health status and it is shared between the federal and state governments – and some states are much more generous than others.

On average, federal and state spending for an enrolled parent or child averaged $3,442 in 2009, but it was more than $17,000 for an elderly or disabled person, according to the Kaiser Family Foundation. (Kaiser Health News is an editorially-independent program of foundation.)

Pefok, meanwhile, has been spreading the word. He says at least one uninsured man from his church who assumed he did not qualify is applying for coverage.

But Pefok, whose parents were born in Cameroon, had his first success at home. His 23-year-old brother, who attends California State University at Monterey Bay on a soccer scholarship, has had insurance coverage through his school, but only during the academic year. Terrified of injuries, and of losing his scholarship if he couldn’t afford proper treatment, he had avoided physical activity while on summer break.

So when Pefok told his mother that the law now allows parents to keep children on their policies until age 26, she promptly enrolled his brother. “It’s a big relief,” he said.

Reaching Out To Legal Immigrants Who Need Health Care