PASADENA, Calif. — Angel Torres hasn’t been to the doctor since coming to the United States illegally more than two decades ago. But now, his vision is getting blurry and he frequently feels tired. Torres, 51, worries he might have diabetes like his brothers.

“Time is passing,” he said in Spanish. “I need to get checked out.”

Torres is in luck. He lives in California, which has a dramatically different approach than most other states to health care for immigrants without authorization to live here.

Several counties — including Los Angeles, where Torres lives — offer these immigrants free coverage allowing them to receive care at local clinics. In addition, as many as 500,000 low-income immigrant parents eligible for President Barack Obama’s new deportation relief likely will qualify for Medi-Cal, California’s version of Medicaid. Already, young adults who were brought here as children and have been granted similar immigration relief can receive the state-funded insurance.

And in December, legislation was proposed to extend state-subsidized health insurance to everyone, including those barred from getting covered through the Affordable Care Act. Federal dollars could not be used.

The push to offer health insurance to all Californians regardless of immigration status is the latest in a series of immigrant-friendly state policies over the past few years. Already, immigrants here illegally can obtain licenses to practice medicine, law or other professions, and as of this month, they can apply for driver’s licenses.

There is no guarantee that other states will follow California’s lead, but the size and demographic makeup of the state ensure it a prominent role in the national debate over coverage of people living in the country illegally.

“If California goes out on a limb on this, it could have an impact on other states,” said Randy Capps, director of research for the Migration Policy Institute, a nonpartisan think tank based in Washington, D.C. “It is a really big thing.”

California has been a leader on immigration issues in the past. For instance, it was one of the first states to offer in-state tuition to students living in the state illegally.  Now, about 20 states do so.

Still, some states are unlikely to consider offering them health coverage in the near future. In the South, for example, advocates for expanded coverage say they are still trying to convince officials to expand Medicaid programs to include more U.S. citizens and legal residents. The federal law allowed states to extend Medicaid to include people at slightly higher incomes and without children.

“We are having a very different conversation,” said Cindy Zeldin, executive director of Georgians for a Healthy Future. “I think we are really far away as a state from where California is.”

California, however, is very far from where it used to be.

In 1994, voters passed an initiative, Proposition 187, that sought to deny education, health care and other benefits to immigrants living here illegally. 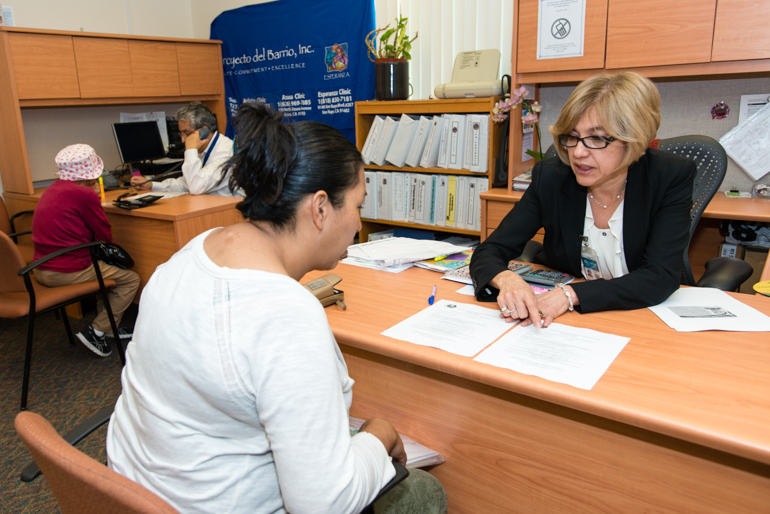 “It is really an important development that California – 21 years after Prop. 187 – is where it is,” said Thomas A. Saenz, president of the Mexican American Legal Defense and Educational Fund, or MALDEF. “That change, in less than a full generation, is what we are going to see increasingly across the country.”

Saenz attributes California’s transformation in part to the growth of the immigrant population and Latino electorate. He also believes people have come to understand that issues like health affect everyone — one person’s inability to get treatment can sicken others in the community.

In addition, Saenz and others say immigrant youths brought illegally into to the country by their parents, when they were too young to make choices, have put a human face on the issue.

“We have to credit … the young undocumented activists who have come out and said, ‘I am unafraid and I am here,’” said Gabrielle Lessard, health policy attorney with the National Immigration Law Center.

U.C. Berkeley graduate Jose Flores, 23, is one of them. His face is on billboards around the state as part of a campaign for universal health coverage. Flores received temporary legal status through the Obama administration’s  plan for undocumented youth and can now apply for Medi-Cal, though his parents are still in the country illegally and uninsured.

“I have always thought the best way to receive support is through being open about our status,” he said.

Not everyone is so thrilled with the push for expanded coverage. Tim Donnelly, a former state assemblyman said covering any immigrants here without authorization is fiscally irresponsible and threatens to “erase the line between legal and illegal.”

“We’ve finally gotten the seesaw of the California budget under control,” said Donnelly, who was a leader in the Minuteman citizen border patrol group. “It’s the wrong time to open up a can of entitlement worms.”

In the meantime, local initiatives in California are paving the way for broader change, said Anthony Wright, executive director of the consumer group Health Access.

“We think that these county efforts, whether they be in San Francisco, Alameda or Los Angeles, provide momentum,” he said. They could be “bridges to a statewide solution.”

Los Angeles County rolled out its $61 million program last fall called My Health LA, which provides free coverage to immigrants living in the country illegally and pays community clinics to care for them.

Angel Torres signed up at Community Health Alliance of Pasadena this month. Patricia Monroy, a clinic employee who helped him apply, told him that he could seek care at certain clinics and publicly-funded hospitals in the county but that he should avoid private facilities. “It’s a county program,” she reminded him. “It’s not insurance.”

At another clinic participating in My Health LA, El Proyecto del Barrio in the San Fernando Valley, Maria Lara signed up, along with her 11-year old daughter. Her son, born several months ago in the U.S., receives Medi-Cal, she said. 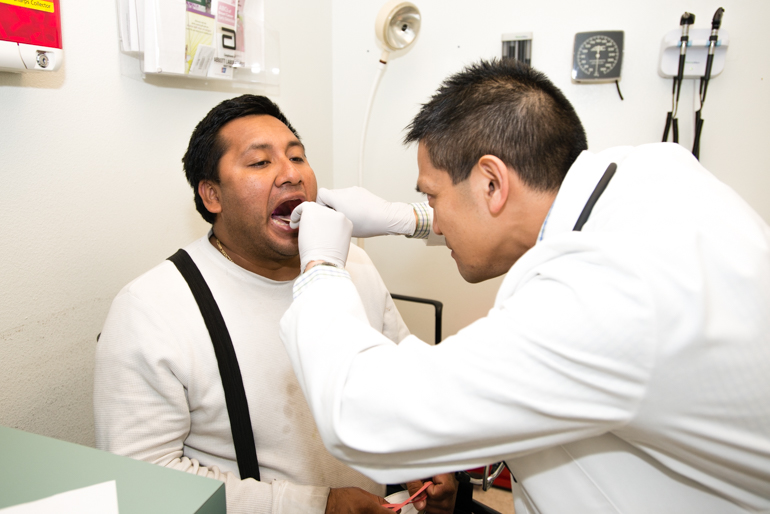 Lara said that just a few weeks before his birth, her husband was deported. Now she lives off the support of her church. A friend told her she could get free health coverage at a local clinic. She was nervous but anxious to get treatment for a thyroid condition identified during her pregnancy, when she had coverage under the emergency Medi-Cal program.

“Now I can make an appointment and not wait for hours in the emergency room,” she said.

Another patient, Aldo Corado, said he has relied on public hospitals and clinics with sliding scales since a car accident five years ago left him paralyzed and in a wheelchair. When he heard about My Health LA, Corado eagerly enrolled.

On a recent January morning he came to El Proyecto because of a lingering cough. Corado said he can’t work so appreciates the free coverage. But the father of two U.S.-born children said he is hopeful that he will get on Medi-Cal.

“It would be practically a dream for immigrants to have Medi-Cal,” he said, adding that it could enable him to have more access to specialists and physical therapy.

The bill, proposed by Sen. Ricardo Lara, would allow low-income immigrants to receive Medi-Cal and those with higher incomes to purchase plans with state subsidies. He proposed a similar bill last year but it stalled in committee.

A U.C. Berkeley study issued in May said that covering all immigrants in California illegally would increase Medi-Cal spending by 2 percent in 2015 while increasing enrollment by 7 percent. The cost of about $360 million would be significantly offset by a drop in health-care costs for the uninsured as well as an increase in sales tax revenue from managed care health plans, the study by the U.C. Berkeley Labor Center wrote.

When Gov. Jerry Brown issued his spending plan this month, he didn’t include an estimate for how much it would cost to extend Medi-Cal to the immigrant population granted deportation relief under the Obama order. The deportation relief applies to certain parents of U.S. citizen or legal resident children. Health officials said it was too early to tell how many people would apply.

About 1.85 million immigrants living in California illegally are uninsured, Capps of the Migration Policy Institute said. He estimated that Obama’s new policy could bring forward between 450,000 and 500,000 people who could qualify for Medi-Cal.

Meanwhile, the campaign to cover everyone in California is continuing. The California Endowment is promoting the coverage through billboards, social media and radio ads. Daniel Zingale, senior vice president at the organization, said Obamacare should have included this immigrant population.

“In California, that is a real problem,” he said. “We have to find a way to finish the job.”