SEATTLE — From an upscale assisted living center here, 87-year-old Brendan Wall has some advice for members of Congress eager to repeal the Affordable Care Act: Slow down.

“I think it’s a major crisis, and I hope to God they take enough time to think about it and act on it so that the thing will work.”

Wall lives at Merrill Gardens, a complex near downtown Seattle where anxiety runs high over the transition to a new administration in Washington, D.C. And while the evolving drama may not affect him directly, he and other seniors here fret about the Donald Trump administration’s vow to repeal and replace the Affordable Care Act and what it will mean for their children and grandchildren.

Wall and five other residents responded to a Kaiser Health News request for area seniors willing to share their views about health care as Trump takes over and pressure mounts on Capitol Hill to repeal the Affordable Care Act. In a news conference Wednesday, Trump again called the health law “a complete and total disaster,” and said he intends to move quickly to replace it with something “far less expensive and far better,” though he offered no specifics. 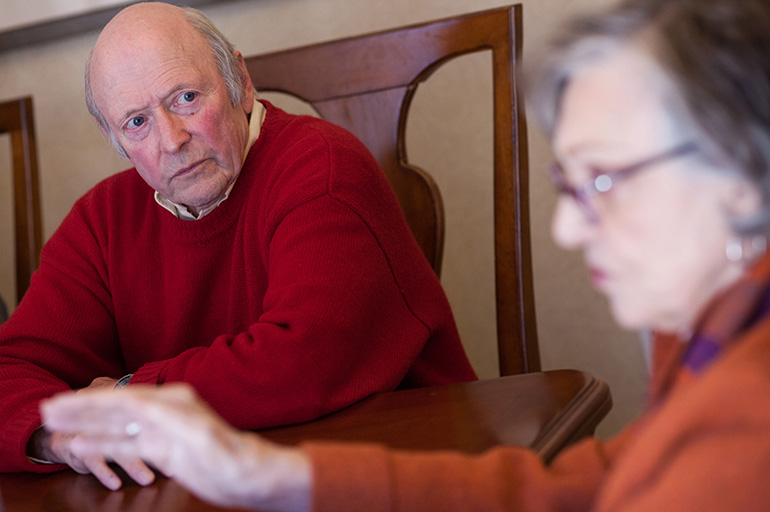 Deductibles are “out of this world. I think they had to do something,” said John Ball, 73, a retired developer. But he said that the solution is not to scrap it without an alternative. (Jovelle Tamayo for KHN)

The view from Merrill Gardens offers a snapshot of a larger national debate about the successes and failures of President Barack Obama’s signature legislation. Its residents live in liberal King County, where less than 22 percent of voters chose Trump. But only 125 miles away, in a rural district that voted for Trump, Republican Rep. Jaime Herrera Beutler says seniors’ anxieties over repeal of the Affordable Care Act are misplaced.

“Seniors are right to be concerned about the future of ACA, but not because of congressional Republicans’ plans,” spokeswoman Amy Pennington said in an email. “The law’s fundamental flaws, phony finances and broken promises will cause it to collapse on its own — Medicaid expansion, exchanges and all.”

At Merrill Gardens, residents are more politically engaged than in many parts of the country. They avidly follow the news through local newspapers, TV, the internet and radio. 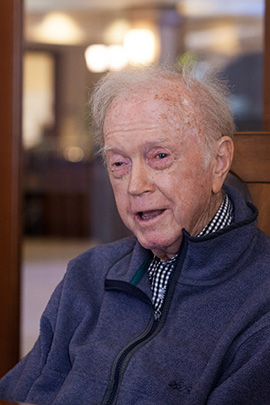 The group that showed up for an open meeting in the complex’s private dining room ranged in age from early 70s to late-80s. They included retired education, business and health professionals. Loree Wagner, a center spokeswoman, said the organizers did not ask for political affiliation.

“I find this moment especially challenging,” said Dick Kirkendall, 88, a retired University of Washington history professor who specialized in the presidency of Harry S. Truman. “I have a hard time seeing what’s ahead, a harder time than I’ve ever had. I have a harder time knowing what my president is going to do.”

Everyone in the room said they had few complaints about their existing health insurance coverage through Medicare, Medicare supplements, private pensions and Veterans Affairs programs.

But they said they fear that proposed changes — including plans to privatize Medicare and revamp Medicaid and Social Security — will mean less care for their families and the poor.

“My opinion is not to touch Medicare or Medicaid,” said Terry Doucette, 76, a former admitting department manager for a local hospital. “I mean, people are dependent upon it and there needs to be a warning time and coming together in a real thoughtful way, making everything work together, especially for the least fortunate.”

Herrera Beutler said she supports plans to protect Medicare and Social Security for seniors in the future. 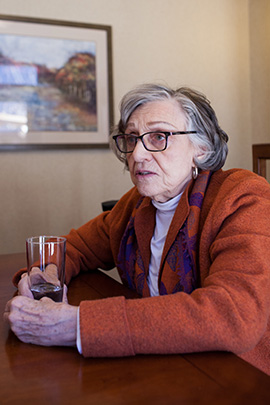 Sandra Wiatr, 80, is a registered nurse. “There were people who didn’t do lab tests, who took only half of their medication because they couldn’t afford it,” she said. (Jovelle Tamayo for KHN)

Overall, they sympathized with the frustrations of those who criticized the ACA, which created online health exchanges that expanded coverage to millions, but also saw sharp rises in costs and, in some cases, limited coverage choices.

“The Obama thing had been moving out of control, particularly for middle-class people whose insurance premiums have gone up and their deductibles are unbelievable,” Wall said. “They’re out of this world. I think they had to do something.”

But they also echoed the views of a recent Kaiser Family Foundation tracking poll that found that while one in five Americans support repeal alone, three-quarters either oppose repeal entirely or want to wait until details of a replacement plan are complete. (KHN is an editorially independent program of the foundation.)

The answer is not to scrap the plan that expanded insurance to 20 million people while offering no alternative, said Ball, who only obtained regular insurance when he qualified for Medicare eight years ago. He still lives with consequences of untreated injuries, including a broken clavicle that healed badly after a rugby injury years ago.

“I’m distressed at the proposal that we chuck out the baby with the bath water,” he said. “I’ve seen the backside of no insurance and living with something you hoped wouldn’t be considered a pre-existing condition. I have a pretty strong identification with those people who didn’t have insurance and were suddenly brought into the fold of Obamacare.” 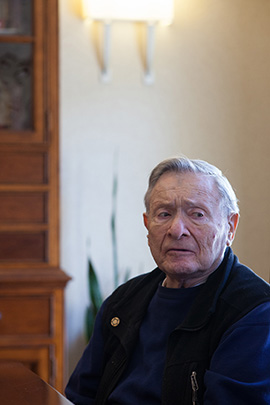 Dr. Harold Ellner, 89, a retired urologist, supports single-payer. “Obamacare seems to have been a way station on the way to universal health care.” (Jovelle Tamayo/for KHN)

In her work as a school nurse, Wiatr saw many students with asthma whose families couldn’t afford medication inhalers to control the potentially life-threatening disease. When she managed a family practice clinic, she saw people try to cut medical costs at the expense of health.

“There were people who didn’t do lab tests, who took only half of their medication because they couldn’t afford it,” she said. “I am very upset because I think our politicians don’t have a clue how difficult it is for people to receive medication and adequate health care.”

Ellner, the urologist, worked for a local Planned Parenthood clinic after he retired and flatly said he supports a universal, single-payer health system.

“Obamacare seems to have been a way station on the way to universal health care and now it’s not only being challenged, it’s being threatened,” he said.

The situation now calls for compromise and compassion from political leaders, said Doucette. “What I want to do is simply get the hard-headed guys from both parties to meet and really want to do this instead of wanting to win,” she said. “Now, we’ll see what Trump does. He has all these ideas and he thinks everyone else is on a lower level. I would like to see them work together.”