Month after month, Natalia Pedroza showed up at the doctor’s office with uncontrolled diabetes and high blood pressure. Her medications never seemed to work, and she kept returning to the emergency room in crisis.

Walfred Lopez, a Los Angeles County community health worker, was determined to figure out why.

Lopez spoke to her in her native Spanish and, little by little, gained her trust. Pedroza, a street vendor living in downtown Los Angeles, shared with him that she was depressed. She didn’t have immigration papers, she told him, and her children still lived in Mexico.

Then she mentioned something she hadn’t told her doctors: She was nearly blind.

Pedroza’s doctor, Janina Morrison, was stunned. For years, Morrison said, “people have been changing her medications and changing her insulin doses, not really realizing that she can’t read the bottles.”

Health officials across the country face a vexing quandary – how do you help the sickest and neediest patients get healthier and prevent their costly visits to emergency rooms? Los Angeles County is testing whether community health workers like Lopez may be one part of the answer.

Lopez is among 25 workers employed by the county to do everything possible to remove obstacles standing in the way of patients’ health. That may mean coaching them about their diseases, ensuring they take their medications or scheduling medical appointments. Their help can extend beyond the clinic walls, too, to such things as finding housing or getting food stamps.

The workers don’t necessarily have a medical background.  They get several months of county-sponsored training, which includes instruction on different diseases and medications, as well as tips on how to help patients change behavior. They are chosen for their ability to relate to both patients and providers. Many have been doing this job for friends and family for years – just without pay.

“By being from the community, by speaking their language, by having these shared life experiences, they are able to break through and engage patients in ways that we as providers often can’t,” said Dr. Clemens Hong, who is heading the program for the county. “That helps break down barriers.”

For now, they work with about 150 patients, many of whom have mental health issues, substance abuse problems and multiple chronic diseases. The patients haven’t always had the best experience with the county’s massive health care system. 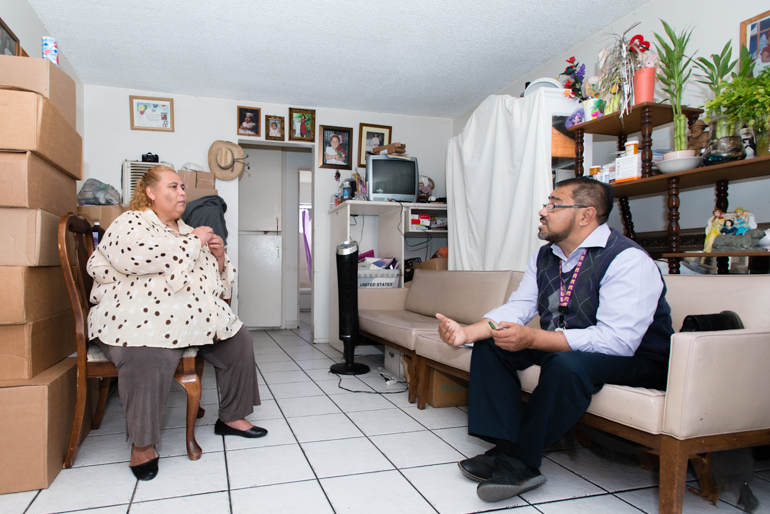 Walfred Lopez, a community health worker at the Los Angeles County-USC Medical Center, visits patient Maria Rivera, 48, at her home in La Puente, Calif., on Oct. 9, 2015. Rivera says she depends on Lopez to understand what is happening with her health. (Photo by Heidi de Marco/KHN)

“They tell us, ‘I am just a number on this list,’” Lopez said. “When you call them by name and when you know them one-on-one … they receive that message that I care for you. You are not a number.”

By spring, Hong said he hopes to have hundreds more patients in the program.

Community health workers have been used for decades in the U.S. and even longer in other countries.  But now officials in various counties and states — including Massachusetts, Pennsylvania and Oregon —  are relying on them more as pressure grows to improve health outcomes and reduce Medicaid and other public costs, experts said.

“They are finding a resurgence because of the Affordable Care Act and because health care providers are being held financially accountable for factors that occur outside the clinical walls,” said Dr. Shreya Kangovi, assistant professor of medicine at the University of Pennsylvania and director of the Penn Center for Community Health Workers. 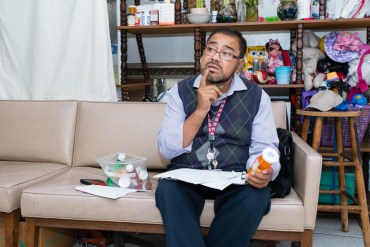 Community health worker Walfred Lopez checks the patient’s medicine to make sure she is up-to-date during a home visit in La Puente, Calif., on Oct. 9, 2015 (Photo by Heidi de Marco/KHN)

Kangovi said community health worker programs, however, are likely to fail if they don’t hire the right people, focus too narrowly on certain diseases or operate outside of the medical system. They also need to be guided by the best scientific evidence on what works.

“A lot of people think… they can sort of make it up as they go along, but the reality is that it is really hard,” she said.

Hong, who designed the program based on lessons learned from other models, said Los Angeles County is taking a rigorous approach. It is conducting a study comparing the costs and outcomes of patients in the program against similar patients without assigned workers.

The patients are chosen based on their illnesses, how often they end up in the hospital and whether doctors believe they would benefit.

To Lopez, 43, the work is personal. A former accountant from Guatemala, Lopez has a genetic condition that led to a kidney transplant. Like some of his patients, including Pedroza, he is now on dialysis.

He tries to use his experience and education to get what patients need. But even he runs into snags, he said. One time, he had to argue with a clerk who turned away his patient at an appointment because she didn’t have identification.

“The hardest part is the system,” Lopez said. “Trying to navigate it is sometimes even hard for us.” 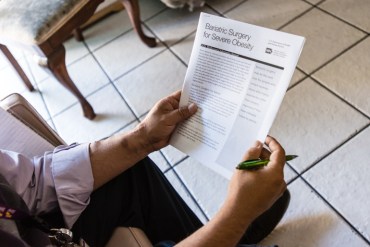 Walfred Lopez informs patient Maria Rivera that she is a candidate for bariatric surgery, but needs to lose some weight before the procedure. (Photo by Heidi de Marco/KHN)

Lopez and his fellow community health worker, Jessie Cho, sit in small cubicles in the clinic at Los Angeles County-USC Medical Center, the county’s biggest and busiest public hospital. Throughout the day, they accompany patients to visits and meet with them before and after the doctor does. They also visit patients at home and in the hospital, and give out their cell phone numbers so patients can reach them quickly.

Cho said the patients often can’t believe that somebody is willing to listen to them. “Nobody else on the medical team has it as their job to provide empathy and compassion,” she said.

Morrison, the clinic physician, said both workers have become an essential part of the health team.

“There is just a limited amount I can accomplish in 15 or 20 minutes,” Morrison said. “There are all these mysteries of my patients’ lives that I know are getting in the way of taking care of their chronic medical problems. I either don’t have time to get to the bottom of it or they are never going to really feel that comfortable talking to me about it.”

Natalia Pedroza, who wears a colorful scarf around her head and speaks only Spanish, is a perfect example.  Morrison said before Lopez came on board, “I wasn’t getting anywhere with her.”

Initially, Lopez had a hard time helping her understand her health conditions and overcoming her distrust of the system. When they first met, Pedroza believed the dialysis that kept her kidneys functioning was the cause of her health problems. And she didn’t get why Lopez was always around.

But he helped her — by getting her appointments, for instance, and helping arrange for Pedroza to get pre-packaged medications so she wouldn’t have to read the directions. Now Pedroza thinks Lopez is helping her to get better.

On a recent afternoon, Lopez sat down with Pedroza before her medical appointment.

“How are you feeling?” he asked in Spanish.

Pedroza responded that her hair was still falling out and that she still felt sick. She also said she hadn’t been checking her blood sugar because she didn’t know how to use the machine. Lopez calmly demonstrated how the machine worked, and then the two spent several minutes chatting about her job and her neighborhood. 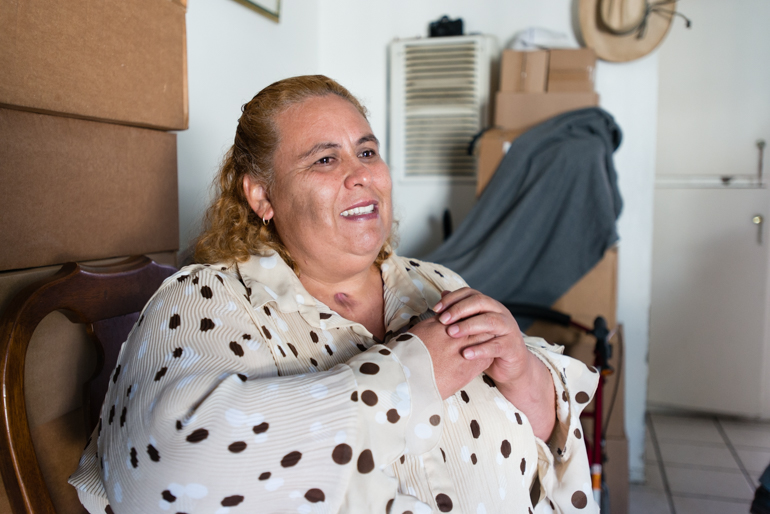 Patient Maria Rivera, 48, at her home in La Puente, Calif., on Oct. 9, 2015. Rivera is diabetic, dealing with high blood pressure and recently had a tracheotomy. (Photo by Heidi de Marco/KHN)

Lopez said he believes he has a made a difference for other patients as well. On a recent Sunday, a 43-year-old patient with chronic pain who initially refused his help texted that he planned to go to the emergency room because of a headache. Lopez reached Morrison, who agreed to squeeze him into the schedule a few days later. And the patient didn’t go to the ER.

Lopez persuaded another patient, a 56-year-old woman, to take her blood pressure medication before her appointments so that when she arrived, the doctors wouldn’t get worried about her numbers and send her to the hospital.

In one case, his ability to bond with a patient almost undermined his goal of getting the man the help he needed. The patient, who was depressed, said he didn’t want to go see a mental health counselor because he was more comfortable talking to Lopez.

In L.A., Community Health Workers Are Part Of The Medical Team