Burkons liked delivering babies but he is also committed to serving his patients, including those who choose abortions.

On a recent day a 30-something woman comes to the clinic. She is six weeks pregnant because, she says, her birth control failed her. She is mother to an older child, and she has an immune system illness that requires her to take drugs that would be toxic to a developing fetus. Burkons greets her warmly as she comes to the clinic for the second round of a medical abortion, a two-dose drug regimen to end a pregnancy.

“We’re going to give you this,” Burkons says, handing the woman the pills.

“And what are these two?” asks the woman, who requested anonymity.

“These are the Misoprostol pills,” Burkons says.

On this day, there is a steady stream of women who visit Burkons’ clinic for medical abortions.

Since the Roe v. Wade decision, Ohio has been a trendsetter in passing restrictions on abortion. That’s why it is especially unusual that in a small Ohio town just south of Cleveland, a new clinic that performs abortions opened its doors. About half of Ohio’s clinics that perform abortions have closed since 2010. Counting Burkons’, there are now nine in the state.

Burkons opened this clinic last year. It’s about an hour south of Cleveland and he wanted it to be personable, with minimum wait times.

At first in his new clinic, he could only administer the pills that induce medical abortion. After 18 months of inspections, rejections and finally acceptance, he began performing surgical abortions here this summer.

Ohio requires more visits than medically necessary to take these pills and makes their use after 7 weeks of pregnancy illegal, as compared with 9 weeks in many other states. The state’s laws regarding who can take those pills and when are one example of how seemingly narrow laws can restrict abortions.

“We believe in an incremental approach to both the legislative side as well as the changing of hearts and minds,” Gonidakis says. 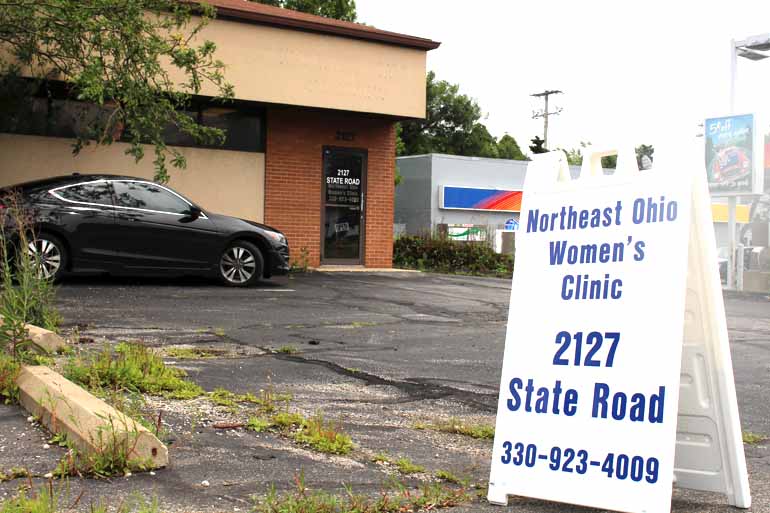 Dr. David Burkons recently opened this clinic that performs abortions, one of only nine in Ohio, just south of Cleveland. (Photo by Sarah Jane Tribble/WCPN)

Another Ohio law says clinics must have agreements with nearby hospitals to send patients there in case of an emergency.  It is similar to a Texas law that requires doctors who perform abortions have admitting privileges at nearby hospitals. The U.S. Supreme Court may take up that case in the fall.

Ohio is embracing that trendsetter role yet again with proposed legislation that would make it illegal to end a pregnancy if the reason for the abortion is that the fetus has Down syndrome.

Lee Strang is a conservative-leaning law professor at the University of Toledo. He says the incremental approach of restricting access to abortion seems to be working across the country.

“At some point in the mid to late 70s, pro-life people recognized that they were in for the long haul,” Strang says.  “Instead of trying to overturn Roe at least immediately, they tried to incrementally undermine Roe through the judicial appointment process and then through state and federal statutory restrictions on abortion.”

Jessie Hill is a law professor at Case Western Reserve University and sits on the board of a clinic in Cleveland that performs abortions called Preterm. She said various provisions of abortion restrictions have gone under the public radar for years.

“It’s hard for people to see how any one of these things in isolation impacts abortion access, but when they add up, they can really constitute a major burden,” Hill says.

Burkons says his work is very rewarding because virtually all the women he treats are relieved and grateful. 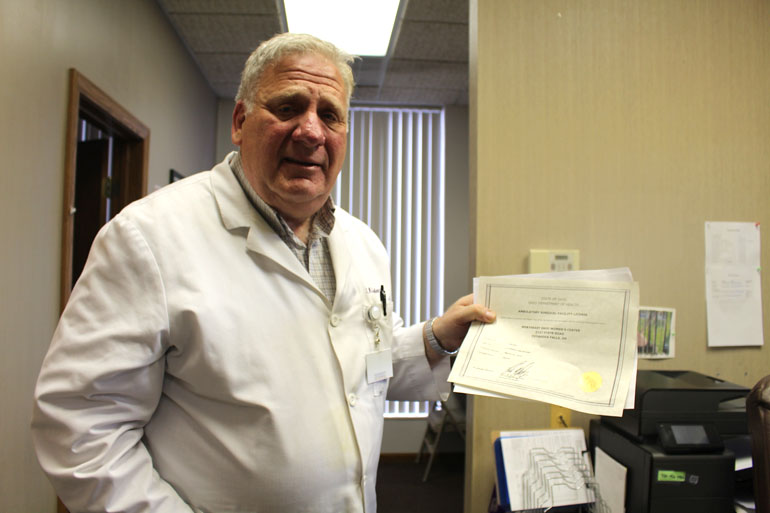 Dr. David Burkons, shows his ambulatory surgical center license that allows him to perform surgical abortions in his clinic outside Cleveland. (Photo by Sarah Jane Tribble/WCPN)

“Nobody grows up saying, ‘I’m planning on having an abortion.’ And, oh, they think, ‘It will never happen to me, I’m too smart for that,’ or whatever,” Burkons says. “And they just assume that if it does happen, someone will be here.”

When he opened for surgical abortions, there was pent up demand: He performed 16 in three days.

In the face of the controversy about abortion, Burkons is very matter of fact.  He sees abortion as a medical service physicians are obligated to provide, and he recalls what happened before Roe v. Wade passed in 1973.

“The people that were older than me would tell about almost any night that they were on call, they were dealing with septic abortions where people would come in with perforated uteruses or partially completed abortions that were done in some garage somewhere,” Burkons says. “That fortunately was something I never had to deal with in my career.”

More than a decade ago, when Burkons first started performing abortions more regularly, he says he believed there were right and wrong reasons to have an abortion. But his opinion on that has evolved.

Burkons says his patients have included lawyers and doctors, who often arrive embarrassed that they didn’t use birth control properly. But there are other patients, as well.

“You see women who’ve had five abortions, I mean they are using it for birth control,”  he says. “But then you kept thinking about what kind of a parent would that person make, if they can’t figure out how to use birth control?”

In the end, he says, the judgement of which situation is right or wrong is not his to make.

This story is part of a reporting partnership with NPR, WCPN-Ideastream and Kaiser Health News.