The questions from producers run the gamut:  Could a body be stolen from a hospital? What do infectious disease specialists wear during an outbreak? Do surgeons really say “Stat!”?

In a bright office building in Beverly Hills, Kate Langrall Folb and her team at Hollywood, Health & Society are on call to field queries from the mundane to the obscure. “Operators are standing by,” Folb, the group’s director, often tells TV and movie writers. 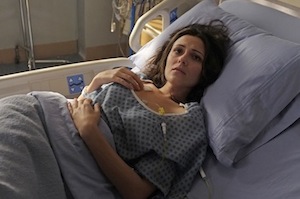 The staff at the ABC Family show “Chasing Life,” about a young journalist who gets diagnosed with cancer, regularly consults with Hollywood, Health & Society, which provides writers and producers with free information about health and medical topics. (Photo Courtesy of ABC Family)

The organization was established with money from the federal Centers for Disease Control and Prevention in 2001 to provide the entertainment industry with free, accurate health information. Since then, the group has worked with hundreds of television writers as they tell stories about performing complicated surgeries, coping with depression and fighting insurance companies for coverage.

They consulted on Walter White’s cancer battle in “Breaking Bad” and on Max Braverman’s Asperger’s syndrome in “Parenthood.” They advised writers for “Law & Order” on an unvaccinated child who infected a classmate and on Disney’s “Doc McStuffins” on treating her broken toys. And as millions of people gain coverage through the nation’s landmark health law, they are also providing producers with information for storylines about Obamacare.

The CDC now provides between $300,000 to $500,000 a year in funding, along with other sources. Hollywood, Health & Society relies on a roster of experts around the nation, even bringing medical professionals into writers’ rooms and taking producers on field trips – including to the county morgue.

Recently, the center convened producers, writers, health experts and patients to discuss the Affordable Care Act. They delved into topics including enrollment problems, obstacles to mental health treatment and coverage for immigrant families, with the goal of “inspiring and informing” writers, Folb said.

“The arrival of Obamacare has meant that the [health] stories get a brand new dimension,” said Marty Kaplan, director of the Norman Lear Center at the University of Southern California, which oversees Hollywood, Health & Society.

The health law has already made an appearance in both English and Spanish-language shows, including “Two Broke Girls” and “Grey’s Anatomy.”

“It was so fun to be able to do a story where we could put in the actual word Obamacare,” said “Grey’s Anatomy” story editor Meg Marinis, who frequently calls the USC organization with questions.

Hollywood, Health & Society staff members acknowledge the stories on medical dramas can be obscure and unlikely. In the “Grey’s Anatomy” episode, for instance, a character came to the hospital with lingering stomach pain after getting insurance through the Affordable Care Act. When he arrived, the show’s doctors found an unusual condition: the man had absorbed his own twin at birth.

But dramatic scenarios like this also draw viewers, who may pick up some useful information along the way.

Television has tremendous reach and impact. In one Kaiser Family Foundation study, for instance, viewers’ knowledge that treatment could lower the risk of HIV transmission from mothers to their unborn children increased dramatically after watching a television show. The study also showed that people’s attitudes changed after the episode—the number of people who thought the pregnant, HIV-positive character was irresponsible decreased. (Kaiser Health News is an editorially independent program of the foundation.)

“Even a short mention can influence how people think about these things,” said Tina Hoff, senior vice president at the foundation, which has long partnered with television and other organizations on health storylines and has previously done research with the USC group.

“Grey’s Anatomy” executive producer Dr. Zoanne Clack, who is on the board of Hollywood, Health & Society, puts it another way. She said she used to see about 30 people during a 12-hour shift as an emergency room physician, providing a limited window for health education. Through the show, however, she can reach as many as 15 million people a week.

Clack said she doesn’t want to bore viewers by preaching so she tries to put “public health education messages into people’s heads without them even knowing it.”

For writers and producers, the challenge is to balance dramatic tension against the sometimes complicated or mundane realities of health care. How do you tell a story of a potentially long illness in a short time frame? How do you take a complex subject like insurance and make it understandable and interesting?

These questions crop up constantly, said “Chasing Life” executive producer Patrick Sean Smith. He regularly asks the USC group and other medical sources for guidance on the program, which follows a 24-year-old cancer patient named April Carver. He often follows their recommendations – though not always.

For instance, a medical adviser for the show said real-life doctors would have a character like Carver begin treatment immediately after being diagnosed, but Smith decided to push the treatment off because he didn’t want the character stuck in a hospital for the whole show.

Smith said he isn’t making a documentary but he also feels a tremendous responsibility to get the information right for viewers, including those who are cancer patients and survivors. “We want to be as authentic to them as possible,” he said.

The Kaiser Family Foundation’s Hoff sees another benefit to accuracy in plotlines – it can help clear up confusion about the nation’s health law, which research suggests is widely misunderstood.

But Levi Russell, spokesman for the conservative group Americans for Prosperity, said inserting storylines about the law into TV shows is a little “creepy.”

“It is pretty difficult to imagine that there is going to be an honest discussion with two different viewpoints represented if it is done by Hollywood writers,” he said. “This is not just an issue of entertainment. This is an extremely expensive and complicated piece of legislation.”

Kaplan of the Norman Lear Center at USC said the goal isn’t to take sides on the health law but to give information and provide examples of how real people are affected.

Debate has flared up over the years about the nature of political, social and health messaging in entertainment television, but it is less common now, said Kathryn Montgomery, the director of communication studies at American University. “Because television has become so fragmented … it isn’t triggering the kinds of close scrutiny or controversy over the content,” she said.

Even so, she said, such messaging can raise ethical questions about whether the public should be made aware of how shows are being influenced.

Fast On Their Feet

For now, especially given changes in medical science and health care policy, Hollywood, Health & Society staff members have plenty of work. They pride themselves on understanding TV deadlines and getting the right person on the phone quickly. The team of about a dozen – including people with backgrounds in journalism, public health and the film industry — consults with a long list of doctors and researchers from governmental and medical institutions around the country such as the Johns Hopkins in Baltimore, Mayo Clinic in Minnesota,  and Children’s Hospital Los Angeles, as well as USC.

Mindful of television’s reach, the experts can be surprisingly responsive – even when they are handling real-life health crises. One expert with the CDC recently called back to answer a producer’s questions as she was preparing to fly to Africa to work on the Ebola outbreak.

Steven Giannotta, chairman of USC’s neurology department, said he is glad to help share plot ideas or answer technical questions, even if the information that ends up on a show is not entirely accurate.

“It is not brain surgery,” he said. “It is theatrics. … It has got to be entertaining or it is not going to air.”

In Onscreen Dramas, Health Experts Inject A Dose Of Reality