When a young African-American man dies in the city of Philadelphia, more than half the time there’s one main reason why, says Scott Charles.

Charles is trauma outreach coordinator at Temple University Hospital. The medical center now offers bystander first-aid training, called Fighting Chance, to give friends and family something to do in the minutes before help arrives.

At 6 o’clock one evening, kids run around while their parents and neighbors gather in an elementary school cafeteria. There are training stations set up, and at the back a nurse is showing people how stop blood flow from a gunshot wound.

Each person takes a turn, taking an old towel or T-shirt and wrapping it around the fake bloody arm tight until help arrives.

Everyone’s talking, but emergency medicine doctor Tim Bryan’s voice is the loudest. He’s a Navy veteran, a former combat medic, and he’s used to giving commands. A shooting scene is chaotic and frightening, but Bryan says in just two hours of training, people get enough of the basics so they will know how to respond.

“You have that ‘aha’ moment and people are like, ‘Wow, I can do this. I can control the scene. I can remember to call 911 and tell the person to put direct pressure on even if I don’t do anything else.’ And it does make a difference,” he says.

The topic is serious, but the mood isn’t. Alice Kellam, 63, wears a camouflage tracksuit and rhinestone hoop earrings. She’s chatty and laughs with friends all evening — except when she talks about her husband, who was murdered in 1990. She doesn’t have a lot to say about that, except that it was senseless.

“They took his sneaks and his hat. That was it,” she says. 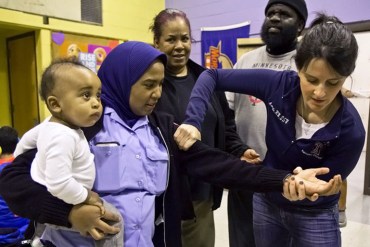 Many people in this North Philadelphia neighborhood have a story about someone and remember a moment when they felt helpless.

Louise Smith (“Everybody calls me Miss Midge,” she says) is a perpetual volunteer, and at the big summer block party at 12th and Cambria, she’s the lady who hands out the flavored water ice.

“About a year ago, we seen a shooting around here,” she says. “It was a shame the two boys died right on the sidewalk, there wasn’t nobody there to help them.”

A severely injured person can bleed to death in less than 10 minutes. But it can take much longer for police to arrive and calm the situation, so the trainers teach the class how to move a victim away from danger and flying bullets.

Registered nurse Maureen Quigg explains how to do a two-person lift-and-carry.

“The knee closest to the victim is down and the other knee is up, and that’s what you stand up with, the power from your legs and not your back,” she says.

Quigg reassures the smaller women that they indeed can help a 200-pound person. 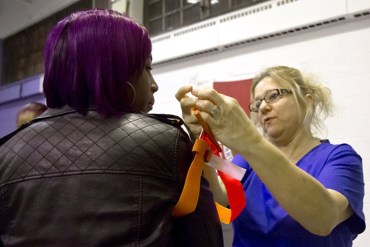 Advocates say learning first-aid skills to stop bleeding is the essential step in bystander education, not unlike learning CPR or making sure a defibrillator is nearby to jump-start someone’s heart. The federal Department of Homeland Security provides an introduction to these lifesaving techniques online in its Stop The Bleed program.

At the end of the evening, the trainers stage a minidrama to test the group.

Bryan sets the chaotic scene and calls out directions. One person is the victim. There’s a pretend shooter.

“Remember, you can ask somebody: ‘Help me control the scene.’ That’s good,” he calls out.

Charles helped develop the first-aid education program after a local resident came to him to complain that he was sick and tired of hearing about young men who died before getting to the ER.

“As we wait for laws to be changed, many people are going to find themselves on the wrong end of a gun,” Charles says. “While those things are certainly important, we have to put the power in people’s hands to address this issue.”

The goal is to saturate one neighborhood with people who have basic lifesaving skills. About 250 people have been trained so far.

In Philadelphia, Neighbors Learn How To Help Save Shooting Victims