Family health insurance premiums rose an average 3 percent this year for people getting coverage through the workplace, the sixth consecutive year of small increases, according to a study released Tuesday.

The average total cost of family premiums was $18,764 for 2017, according to a survey of employers by the Kaiser Family Foundation and the Health Research & Educational Trust. That cost is generally divided between the employer and workers. (Kaiser Health News is an editorially independent program of the foundation.)

While overall premium increases remain modest, workers are picking up a greater portion of the tab — this year $5,714 for family coverage, about a third of total cost.

Employer-provided coverage for a single person rose on average 4 percent, to $6,690. Those individuals pay $1,213 on average.

Still, the employer market looks remarkably stable compared to the price increases seen in the Affordable Care Act’s insurance marketplaces for people who buy their own coverage. Premiums on those plans spiked on average about 20 percent this year, and many insurers dropped out because of financial concerns.

For all the media attention and political wrangling over the  Obamacare exchanges, their share of the market is relatively small. They provide coverage to 10 million Americans while 151 million Americans get health insurance through their employer.

The continued slow rise of employer health premiums identified in the Kaiser survey surprised some analysts who have expected the trend to end as the economy picked up steam, leading to a jump in use of health services and health costs.

Drew Altman, CEO of the Kaiser Family Foundation, said it’s “health care’s greatest mystery” why health insurance costs have continued their slow pace even as the economy has picked up the past few years. “We can’t explain it.” 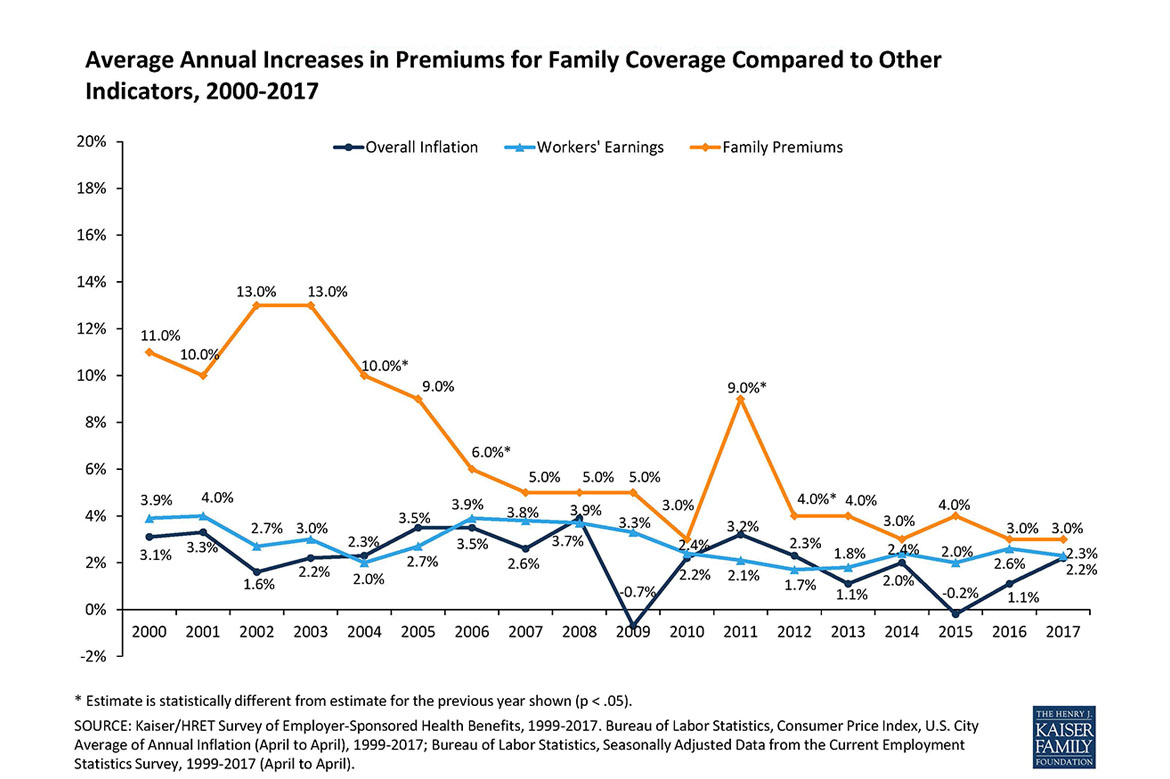 Another unexpected result was that workers’ deductibles — the health bills that workers must pay before their insurance coverage kicks in — remained stable this year at $1,221. Since 2010, as companies sought to keep premiums in check, deductibles have nearly doubled. Higher deductibles can limit premium increases because costs are shifted to workers and it gives them greater incentive to cut spending.

“Increasing deductibles has been a main strategy of employers to keep premiums down and we will have to watch if this plateauing is a one time thing … or if this portends a sharper increase in premiums in future years,” said Altman. “It could be deductibles are reaching their natural limit or could be the tighter labor market” that’s causing employers to back off, he added.

Meanwhile, a second employer survey released Monday by Mercer, a benefits consulting firm, suggests a modest increase in health costs coming next year, too. Employers said they expect their health costs to increase by an average 4.3 percent in 2018, according to the survey.

To deal with higher medical costs — notably big increases in the prices of prescription drugs — employers are using multiple strategies, including continuing to shift more costs to workers and paying doctors and hospitals based on the value of the services rather than just quantity of services.

Jeff Levin-Scherz, a health policy expert with benefits consultant Willis Towers Watson, said there is a limit on how much employers can shift costs to their workers, particularly in a tight labor market. “Single-digit increases doesn’t mean health care costs are no longer a concern for employers,” he said.

The 19th annual Kaiser survey also found that the proportion of employers offering health coverage remained stable last year at 53 percent. But the numbers have fallen over the past two decades.

The survey highlights that the amount workers pay can vary dramatically by employer size. Workers in small firms — those with fewer than 200 employees — pay on average $1,550 more annually for family premiums than those at large firms. The gap occurs because small firms are much more likely than large ones to contribute the same dollar amount toward a worker’s health benefits whether they’re enrolled in individual or family coverage.

More than one-third of workers at small employers pay at least half the total premium, compared with 8 percent at large employers.

That’s the case at Gale Nurseries in Gwynedd Valley, Pa., where health insurance costs rose 7.5 percent this year. Its 25 workers are paying nearly half the cost of the premium — at least $45 a week for those who choose the base coverage plan offered through Aetna. Employees also have deductibles ranging from $1,000 to $2,500.

A decade ago, the nursery paid the full cost of the premium.

At the Westport (Conn.) Weston Family YMCA, health insurance premiums rose about 7 percent this year, leaving its 50 full-time employees to pay a $156 premium for individual coverage.

“It’s not problematic, but it’s one of our bigger costs associated with payroll,” said Joe Query, the human resources director.