But years in an assisted living facility drained her savings, and now she relies on Medicaid to pay for her care at Dogwood Village, a nonprofit, county-owned nursing home here.

“You think you’ve got enough money to last all your life, and here I am,” Jacobs said.

Medicaid pays for about two-thirds of the 1.4 million elderly people in nursing homes, like Jacobs. It covers 20 percent of all Americans, and 40 percent of poor adults.

On Thursday, Senate Republicans joined their House colleagues in proposing steep cuts to Medicaid, part of the effort to repeal the Affordable Care Act. Conservatives hope to roll back what they see as an expanding and costly health care entitlement. But little has been said about what would happen to older Americans in nursing homes if these cuts took effect.

Under federal law, state Medicaid programs are required to cover nursing home care. But state officials decide how much to pay facilities, and states under budgetary pressure could decrease the amount they are willing to pay or restrict eligibility for coverage.

“The states are going to make it harder to qualify medically for needing nursing home care,” predicted Toby Edelman, a senior policy attorney at the Center for Medicare Advocacy. “They’d have to be more disabled before they qualify for Medicaid assistance.”

States might allow nursing homes to require residents’ families to pay for a portion of their care, she added. Officials could also limit the types of services and days of nursing home care they pay for, as Medicare already does.

The 150 residents of Dogwood Village include former teachers, farmers, doctors, lawyers, homemakers and health aides — a cross section of this rural county a half-hour northeast of Charlottesville. Many entered old age solidly middle-class but turned to Medicaid, once thought of as a government program exclusively for the poor, after exhausting their insurance and assets.

A combination of longer life spans and spiraling health care costs has left an estimated 64 percent of the Americans in nursing homes dependent on Medicaid. In Alaska, Mississippi and West Virginia, Medicaid was the primary payer for three-quarters or more of nursing home residents in 2015, according to the Kaiser Family Foundation. (KHN is an editorially independent project of the foundation.)

“People are simply outliving their relatives and their resources, and fortunately, Medicaid has been there,” said Mark Parkinson, president of the American Health Care Association, a national nursing home industry group.

With more than 70 million people enrolled in Medicaid at an annual cost of more than $500 billion, the program certainly faces long-term financial challenges. Federal Medicaid spending is projected to grow by 6 percent a year on average, rising to $650 billion in 2027 from $389 billion this year, according to the Congressional Budget Office.

Even if Congress does not repeal the Affordable Care Act, Medicaid will remain a target for cuts, experts say.

“The Medicaid pieces of the House bill could be incorporated into other pieces of legislation that are moving this year,” said Edwin Park, a vice president at the Center on Budget and Policy Priorities, a Washington nonprofit that focuses on how government budgets affect low-income people. “Certainly, nursing homes would be part of those cuts, not only in reimbursement rates but in reductions in eligibility for nursing home care.” 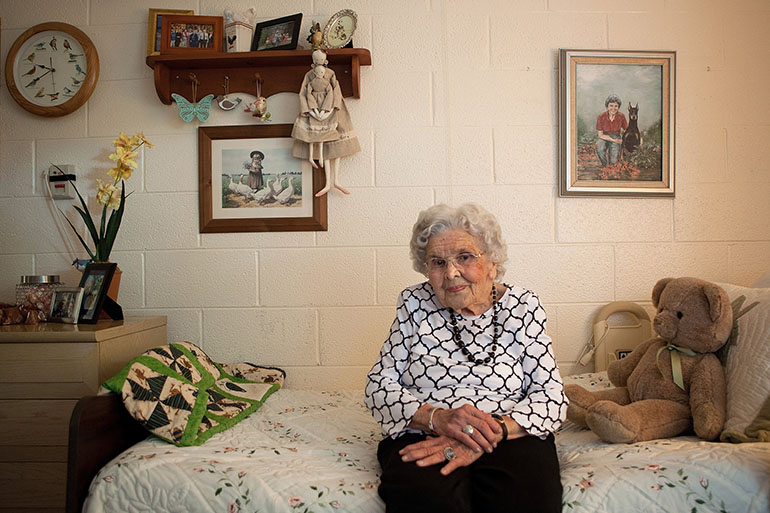 “Moms and kids aren’t where the money is,” said Damon Terzaghi, a senior director at the National Association of States United for Aging and Disabilities, a group that represents state agencies that manage programs for these populations or advocate for them. “If you’re going to cut that much money out, it’s going to be coming from older people and people with disabilities.”

The House health care bill targets nursing home coverage directly by requiring every state to count home equity above $560,000 in determining Medicaid eligibility. That would make eligibility rules tougher in 10 states — mostly ones with expensive real estate markets, including California, Massachusetts and New York — as well as in the District of Columbia, according to an analysis by the Center for Budget and Policy Priorities.

Dogwood Village receives about half of its $13 million annual operating costs from Medicaid, with rates from $168 to $170 a day. Some residents who come to the facility after a hospital stay are initially covered by Medicare, but if they stay longer than 100 days, that benefit ends, and those without savings move to Medicaid.

“You have patients who have spent their life savings, and they come here,” said Kristen Smith, the admissions coordinator. Smith said patients now were older and sicker than they used to be, frequently arriving directly from a hospital.

“It used to be hips and knee” surgeries, she said. “And now a lot of those patients are going home. What we’re seeing is more complex, sicker patients.”

With cinder-block walls brightened by pictures of horses that evoke this equestrian county, the nursing home offers crafts, bingo and other activities.

Mary Ann Mohrmann is 85, the average age of Dogwood Village residents. An elementary school teacher for 25 years, she has Charcot-Marie-Tooth disease, a neurological disorder that has weakened her legs, feet and thumbs and compromised her fine motor skills.

Two of her children have it, too, she said. None of them can take care of her at home. “I’ve been here years,” she said. “I don’t know how many.” 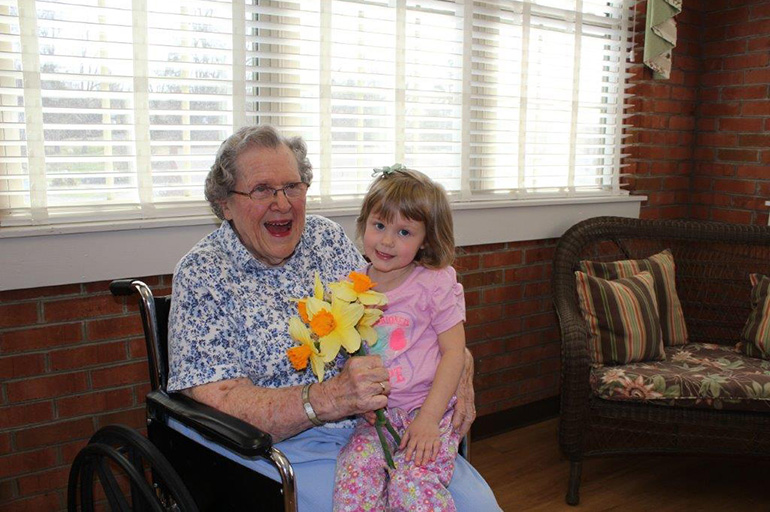 Mary Ann Mohrmann, 85, was an elementary school teacher for 25 years. She now suffers from a neurological disorder and lives at Dogwood Village of Orange County Health and Rehabilitation. (Jeff Poole/Orange County Review)

Medicaid helps pay for care for people with disabilities, like Nancy Huffstickler, 64, who has been here four years and regards herself as “a medical disaster.”

She listed her ailments: spinal cancer in remission, restless legs syndrome, high blood pressure and multiple ulcers. She has had spinal reconstructive surgery and a hip replacement. She is undergoing physical therapy with the hope that, one day, she will be able to leave her wheelchair and use a walker.

Huffstickler is fearful of Republicans’ health care changes. “It may save the federal government money, but what about us?” she asked.

Major Medicaid cuts would compel the facility to cut staff, supplies and amenities — changes that would affect the quality of care for all residents, not just those on Medicaid.

If that does not save enough money, the facility might have to reduce the number of Medicaid residents, said Vernon Baker, who resigned as administrator in April. “It’s not like our toilet paper or paper towels are like the Ritz-Carlton’s,” he said.

Some residents do not even know they are on government insurance; administrators often complete the paperwork to start Medicaid once other insurance expires. Others are embarrassed that they are dependent on a program that still carries stigma.

They should not be, said Jennifer Harper, the assistant director of nursing. Relying on Medicaid for nursing home care has become the new normal.

“These folks have worked their whole lives, some with pretty strenuous jobs, and paid into the system,” she said. But with changes looming, she said, “it may be a system that fails them.”

Watch KHN’s Facebook live with senior correspondent Jordan Rau to hear him talk about reporting on this topic.

In The End, Even The Middle Class Would Feel GOP Squeeze On Nursing Home Care