With Medicare poised next month to give bonuses and penalties to hospitals based on how they ranked in quality standards, a number of health policy experts are questioning whether the amounts of money at stake are large enough to make a difference. 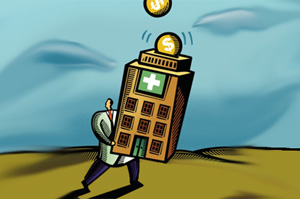 In October, Medicare will begin withholding 1 percent of hospitals’ reimbursements under the new Value-Based Purchasing program created by the health care law. The money, $850 million in the first year, will instead be doled out to hospitals based on how well they score on patient experience surveys and whether they followed a number of basic clinical guidelines in providing care.

Hospitals can earn back the amount they gave up and, if they performed better than most, get even more. The health law directed that the amount of money at stake rises incrementally to 2 percent of reimbursements by October 2016. Close to 3,000 hospitals will be part of the program.

The program is part of a major shift for Medicare, which historically has paid hospitals and doctors based on the nature of services they provided to patients without taking into account how good a job they did. Medicare has already launched several trial programs that are intended to reward hospitals based on performance, but those are voluntary; the value-based purchasing program is the first one that will be applied to nearly all acute care hospitals regardless of whether they want to participate. It kicks in at the same time that 2,211 hospitals will also begin losing money because of high readmission rates, another program created in the health law.

Medicare hasn’t yet calculated how individual hospitals will fare in the first year of the program. But in an article published Tuesday in the policy journal Health Affairs, Rachel Werner, a professor at the University of Pennsylvania, and R. Adams Dudley, a professor at the University of California, San Francisco, modeled the program as if it had been in place in 2009.

Werner said in an interview that as the program increases the maximum size of the bonuses to penalties to 2 percent, “even that size of incentive for most hospitals doesn’t translate into a very big change in base revenue.”

Medicare has modeled its program using more recent data to create what is essentially a dry run for hospitals to see how they would have fared if the program had been in place using hospital performance results between April 2009 and December 2010.

Like the results of the Health Affairs study, the data from the Medicare dry run show that most of 2,894 hospitals would come close to breaking even. Only 143 — fewer than 5 percent — would have received bonuses above half a percent, according to a Kaiser Health News analysis of the Medicare data. Only 108 hospitals — less than 4 percent — would have lost more than half a percent in reimbursements from what they would have otherwise received, the analysis found.

In a written statement, the Centers for Medicare & Medicaid Services said the program “is already working to assure that people with Medicare get high-quality care while in the hospital and we are confident that success will continue as we work together with hospitals to learn more and more about how to better prevent hospital-acquired infections, and improve care for Medicare patients.”

Medicare is expected to release the official payment adjustments in coming months. Even though the program affects future reimbursements, the hospitals will be judged on past performance, using scores they accumulated July 2011 and March 2012.

Some experts think that’s too low to prompt hospitals to make major changes. “We have this tendency to just do things half-heartedly,” said Robert Berenson, a senior fellow at the Urban Institute. He noted, for instance, that in the United Kingdom, as much as 30 percent of primary care physicians’ income is based on how well they meet performance targets. “It certainly got behavior change,” Berenson said.

Harold Miller, a hospital quality and payment expert in Pittsburgh, said, “It is entirely possible under the current payment system, a hospital might lose more money by making the changes necessary to get the small increase in value-based incentives than it would get by ignoring the whole program.”

Hospital officials say the fact that most hospitals are doing about the same is evidence that the program is working. Blair Childs, an executive with Premier, an alliance of hospitals that focuses on improving quality, noted that the average performance scores of most hospitals have been rising since Medicare began publically reporting them on its Hospital Compare website.  “If we’re pulling everyone in in the right direction, isn’t that what you want?” he said. “I guess I call that a win. It’s setting up a very high standard that organizations are attaining.”

Nancy Foster, a vice president at the American Hospital Association, said the sizes of the bonuses are not as important as the signal the program sends “that these are important areas of quality and they’re worth the investment.”

“It’s really about hospitals learning what they can do to improve the care they deliver and the outcomes their patients have,” she said. “You can see that from the significant improvements that occurred over the last five or so years simply from publication of good, reliable quality measures.”

In the first year of the program, 70 percent of the value-based purchasing program is determined by how hospitals score on rudimentary standards of care, such as giving the proper antibiotics and anti-blood clotting agents to surgical patients before operations. The other 30 percent of the bonuses and penalties are determined by how patients rated elements of their stays, including the communication skills of the doctors and nurses and the promptness that their pain was addressed.

Hospitals will be judged both on how they compare with other institutions and how much they have improved over time. Medicare is changing the measures in future years, for instance adding mortality rates for heart failure, heart attack and pneumonia patients in October 2013.

Childs predicted the program would be “transformative” in getting hospital leaders to focus on improving quality. “Nobody wants to go before their board and say they’re getting cut, even if it’s not a huge amount of money, for having poor quality,” Childs said. “That’s not a good strategy for a CEO of a hospital to take in terms of the longevity of their job.”