Because the Affordable Care Act (ACA) is President Barack Obama’s signature legislation, it seems only fair that Independence Blue Cross is lifting a page from his 2012 reelection ground game to target and woo the region’s uninsured.

In an out-of-the-box move for health insurance marketing, Independence used data bought from a third party and supplemented with public records to create a density map of uninsured people in the region’s five Pennsylvania counties, right down to their estimated income level. 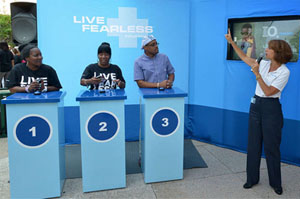 “We not only know where the potential customers are, we have an understanding of what the best products are that will minimize or take advantage of their subsidies to give them the best out-of-pocket experience and the most affordable coverage,” said Brian Lobley, Independence senior vice president of marketing and consumer business. “We know just about what the income distribution is and if it’s an uninsured or small business-centric neighborhood. We’ve gotten down to that level of detail.”

With only five weeks before the online exchanges being created under ACA open, other insurers are gearing up too, with more traditional means.

“We also have a mobile unit called the Blue to You van,” said Tom Vincz, Horizon public relations manager. Next month, Horizon will sponsor a Web-based health insurance center with Univision, the Spanish-language television network. Visitors to Univision’s website can click a link and be sent to HorizonAzul.com, Horizon’s Spanish-language website.

Aetna is taking a low-key approach to marketing. In an e-mail, the company said it would help “consumers understand their options and make informed decisions with resources, including our website (Aetna.com) and customer-service training to assist consumers.” Consumers could also find an ACA tutorial at www.aetnaexchangetutorial.com.

And then there’s Independence, which still dominates the Southeastern Pennsylvania market.

“We could have done what some other places are doing and have the traditional pop-up retail location, going to a location in the malls and trying to anchor along places of business,” Lobley said. “We’re trying to do it in a different way.”

Last week, the company presented its Independence Express, a 50-foot truck loaded with the latest technology. The truck is Internet-enabled, has 14 work stations with iPads and laptop computers, and a seven-minute, live game show with a host and three contestants.

“We thought that the mobile aspect of taking education and the ultimate sales experience to where consumers live and work was going to be the differentiator,” Lobley said.

The truck will visit festivals and events throughout the region in September. It may also park at a few sports events.

“The Phillies and Union are two sports teams that bring the right mixture of crowds, both multicultural and actually have the most female participants,” Lobley said, noting that most family health decisions are made by women.

But don’t expect the big truck to show up in your neighborhood. It’s too big. Besides, the data say there is a better way to reach people in neighborhoods – knock on doors. But not just any doors. Independence is using data to find potential enrollees.

According to Lobley, 60 percent of Philadelphia residents are eligible for subsidies. Theirs are the doors Independence representatives will be knocking on.

“We kind of know what door to knock on, so we know kind of what our success rate will be,” Lobley said. “This is not trying to blanket every household in the five counties. It is targeting the folks we think will be our best customers.”

Independence will also use traditional media outlets. Before the exchanges open on Oct. 1, ads will focus on education and coming Independence events. Once the online marketplaces open, the advertising will switch to getting people enrolled. Independence’s strategy also calls for a heavy emphasis on social media like Twitter and Facebook to reach younger prospects.