The deal reached Tuesday between the Obama administration and Indiana Gov. Mike Pence to expand Medicaid under the president’s health law should help sway reluctant Republican officials in other states because it imposes new costs on poor adults, promotes healthy behaviors and relies on financing from smokers and hospitals instead of state taxpayers, health experts say.

Pence, a potential GOP presidential candidate in 2016, won a three-year waiver from the federal government to make Medicaid more like private insurance by including cost-sharing for recipients below the poverty level.

Under the agreement, Indiana will pay for its share of the expansion costs beginning in 2017 with hospital fees and a cigarette tax. “It’s a great talking point,” to answer opponents who question how states will pay their share of the program’s costs, said Joan Alker, executive director of the Georgetown Center for Children and Families. “This is really an important feature.” 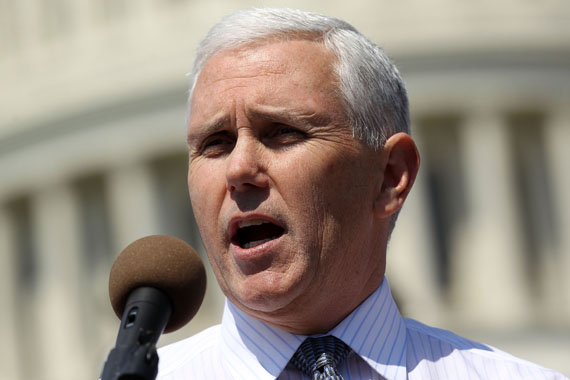 The agreement, which will take effect next week, makes Indiana the 28th state to expand the federal-state insurance program to insure everyone under 138 percent of the federal poverty level, or $16,100 annually for an individual.

About 350,000 Indiana residents are expected to qualify.

Republican lawmakers in Florida, Texas and other states have resisted expanding the program in part because they’re against giving non-disabled adults “free” health coverage. They also worry about having to pick up some costs after 2016 when the federal government stops paying the full bill. Federal funding gradually declines to no less than 90 percent of costs beginning in 2017.

“I think this raises the level of interest in looking at these issues in states that have not expanded Medicaid,” said Joe Antos, a health economist at the conservative American Enterprise Institute. “Lawmakers in Texas may not be influenced but there are other states that will want to know more.”

Several states are expected to debate Medicaid expansion this winter and spring including Florida, Tennessee, Wyoming, Utah and Montana.

But critics of the Indiana deal warn the complexity of the program could make it harder for poor people to get health care and will require major education to teach people how to use so-called “POWER accounts,” modeled on private sector health savings accounts which the state requires to pay the premiums.

The plan gives poor adults the option to buy a basic Medicaid plan called Healthy Indiana or the broader Healthy Indiana Plus, which includes dental and vision benefits and more comprehensive prescription drug coverage. The Plus plan will require enrollees to deposit between $3 to $25 a month into their health savings accounts, based on a sliding scale, although the amount can be reduced if recipients follow some healthy behaviors, such as quitting smoking or getting an annual checkup.

The fees are optional for those under the federal poverty level but if they fail to pay, they will be excluded from the Plus plan and have to make nominal co-payments for care. With limited exceptions, people between 100 percent and 138 percent of the federal poverty level who fail to pay their premiums will be locked out of Medicaid coverage for six months. Both of these provisions are unique to Indiana.

Though the original plan had also sought tying coverage to work incentives, the administration did not approve that.

Georgetown’s Alker said the Indiana deal provides fresh evidence that the Obama administration will give flexibility to states that agree to expand the program. Indiana is the fifth state to expand through a special federal waiver after Arkansas, Iowa, Michigan and Pennsylvania.

Still, she says the six-month lockout period is “unnecessarily harsh.”

Some consumer advocates also worry the Obama administration made too many concessions to win the state’s participation.

“It is worrisome that the Healthy Indiana Plan will charge significant premiums and penalize some who aren’t able to pay by locking them out of coverage for up to six months,” said Robert Restuccia, executive director of Community Catalyst in Boston. “A large body of research demonstrates that premiums and unreasonable cost-sharing requirements impede access to coverage and needed health care services and can lead to increased medical debt, especially for low-income people. “

But Grace-Marie Turner, president of the conservative Galen Institute, said the deal moves Medicaid in the right direction.

“I see it as taking advantage of an opportunity to lay the groundwork for the kind of Medicaid reform that we must move toward in the future. …By winning approval of these changes through a Medicaid waiver, other governors have a much stronger platform to move toward other changes that will work for their states.”

States worried about how they will pay for expansion beginning in 2017 when they have to start paying a percent of the costs also got a boost from the Indiana strategy. Hospitals in Arizona and Colorado have also agreed to fund part of state share of Medicaid expansion, and that’s been proposed in Tennessee where lawmakers will hold a special session next week on the issue.

Hospitals for decades have contributed money to many states to help support Medicaid because that money helps draw down more federal funding. Hospitals in Indiana agreed to pay the money — more than $80 million in 2017 —because they believe they will make it up by having fewer uninsured patients, said Brian Tabor, a vice president of the Indiana Hospital Association.

Medicaid has allowed states to charge nominal co-pays to all adults and premiums for people above the poverty level. Iowa this year began charging a small premium to some people below the poverty level, but there is no penalty if they can’t or won’t pay it.

Kip Piper, a health care consultant with Sellers Dorsey in Washington D.C., said the Indiana agreement is likely a bigger political deal than a major policy change. “It shows the Obama administration has moved slightly to allow the state to test this particular model.”

Pence can now argue he has changed Medicaid and is making beneficiaries more responsible for their actions, Piper said.

“This moves the dial ideologically in favor of what the governor wanted,” Piper said. “It might invite other states to explore this and other changes that would make expansion more palatable to legislators.”