NEW YORK — Clutching a railing for balance, 89-year-old Alan Epstein searched the hospital waiting rooms for families in distress. He paused when he came across a young woman standing alone in the hallway, making a phone call about her grandfather’s faltering health.

“Are you aware of the caregiver support center?” Epstein asked when she got off the phone. Just around the corner from the sterile waiting room, he told her, there’s a refuge with hot coffee, soft chairs and pleasant company.

Epstein, an energetic former financial broker who still plays tennis twice a week, knows the hallways well: His wife was a patient at the hospital, Montefiore Medical Center in New York City, before she died. Now he’s one of 30 volunteers who make their rounds there, recruiting stressed-out families to visit a small suite set aside for their comfort and emotional support.

Montefiore’s caregiver support center, staffed by a social worker and an administrative aide, is one of 11 that have popped up over the last decade in New York, New Jersey, Pennsylvania, Connecticut, Michigan and Iowa, based on a model created in 2006 at Northern Westchester Hospital in New York.

Hospitals are showing a greater interest in family caregivers in part because of new penalties for hospital readmissions, said Jill Gottlieb of Northern Westchester Hospital, who helps other hospitals set up their own support centers. Gottlieb said when family caregivers get the support they need, they are better poised to help patients successfully transition home.

“The family caregiver often is thrust into this world unexpectedly,” she said. “They’re ill-prepared.”

Inside hospitals — where they spend long hours awaiting surgeries or last-ditch efforts to save loved ones — family caregivers feel invisible and are “most often ignored,” said Susan Reinhard, director of AARP’s Public Policy Institute, which has been leading a state legislative campaign to require hospitals to incorporate caregivers into a patient’s care plan.

Randi Kaplan, the social worker who runs the support center at Montefiore’s Henry and Lucy Moses campus, a 1,500-bed hospital in the Bronx, a borough of New York City, knows that “invisible” feeling. She spent hours there during her husband’s six-and-a-half-hour surgery for a brain tumor.

“We were in a very sterile environment,” Kaplan recalled. “Nobody talked to us.”

Kaplan returned to the hospital in 2005, during a “cascading course of unstoppable events” at the end of her husband’s life. Rushed to the critical care unit after his cancer spread to his liver, he died at age 50.

“I was falling apart,” she said. Kaplan said she needed emotional support, but again, “nobody approached us — not a social worker, not a chaplain.”

That experience inspired Kaplan to help Montefiore create the support center in 2011, complete with a soothing waterfall, pictures of cherry blossoms, and private rooms with reclining chairs. Last month, she won an award from the Schwartz Center for Compassionate Healthcare for her work at the center, which has seen an estimated 10,000 families so far. 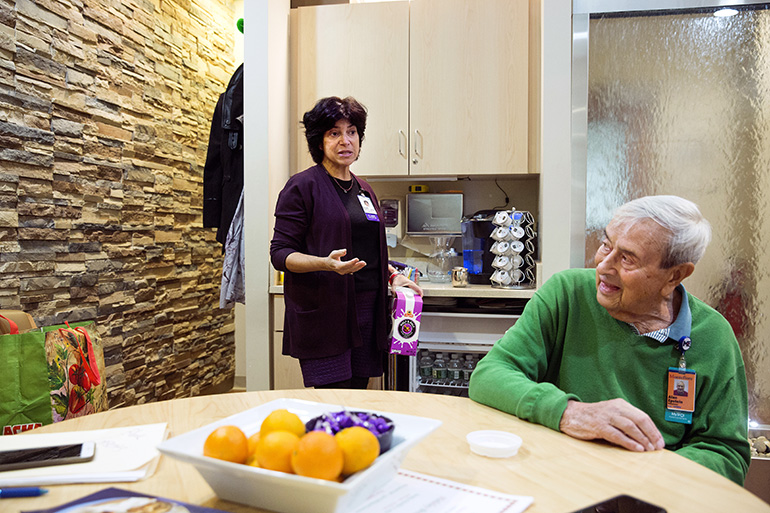 On a recent morning, she burst in the door with a bag of groceries — oranges, coffee, dark chocolate, red velvet cake and tissues — to offer to patients and staff.

Tissues are essential, she said: Families visiting loved ones in the hospital are “always emotionally fatigued, always anxious, always feeling alone and overwhelmed. Once they sit down, the tears start flowing and the tissues come out.”

About half of the people who come in the door are dealing with end-of-life situations, she said.

The scene inside the center can be tense: Earlier this year, Kaplan said, a woman came to the center in hysterics, gasping for air. The woman’s husband, who was in his 30s, had been rushed to the hospital in cardiac arrest.

Kaplan said she held the woman’s head to stop her from banging it against the concrete. The woman’s family urged staff to medicate her. Instead Kaplan called in a palliative care doctor, Say Salomon, who calmed her and assured her her reaction was normal. Kaplan later held the woman’s hand while a surgeon told her her husband had died.

Salomon, who stopped into the center recently, said he often brings families there for difficult conversations. In one recent case, he said, he helped a family call the patient’s son in jail. The son, who had just learned his father was dying, had to decide whether to use his travel privileges to visit his father in the hospital, or to attend the funeral.

At other hospitals, conversations like these occur in sterile conference rooms, or at the patient’s bedside, Salomon said — “There’s no dedicated space for something like that.”

There’s no dedicated space for hospital weddings, either, but that didn’t stop Kaplan from hosting one. She grew so close to a cancer patient and her partner of 14 years that they insisted on getting married inside the caregiver support center, with Kaplan as maid of honor. Kaplan decorated with flowers and walked the bride down the “aisle.” As she does with many families, Kaplan stayed in touch with the husband after he lost his wife a month ago, at age 59.

A recent visit to the center featured no grand ceremonies but small acts of compassion.

Alexa White, the 24-year-old woman whom Epstein had stopped in the hallway, arrived a few hours later with her 80-year-old grandmother and a cousin. She said her grandfather broke his hip and was suffering from internal bleeding. As they awaited updates, White, a nursing school student, caught up on homework and her grandmother napped.

Ramon Santiago III, who sells life insurance, was alone at the hospital, waiting for his father to emerge from two major surgeries — a heart and kidney transplant. He stopped in to use the center’s computers, and stayed to chat with Kaplan over coffee. He also met volunteer Elvin Olivera, a liver transplant survivor who announced himself as living proof that organ transplants work.

In addition to former patients like Olivera, volunteers include retirees from various careers — police sergeant, elementary school teacher, CT scan technician and labor union president. They went through 10 weeks of training, on top of the unofficial training of caring for their own loved ones. 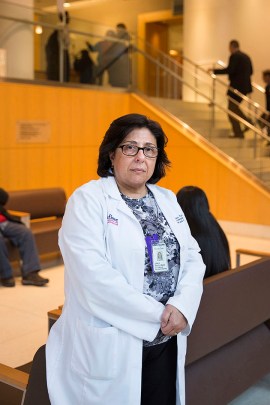 The center, established through a United Hospital Fund grant, does not charge for its services. It has allowed the Montefiore to “take a more holistic view” of patients in the context of their families, instead of simply focusing on the day’s surgery, said Dr. Peter Semczuk, the hospital’s executive director.

Some of the family caregivers the center has helped also work inside the hospital. Laura Tocci, the hospital’s director of audiology, said she came to see Kaplan after her wife was diagnosed with pancreatic cancer a year and a half ago.

“I walked through the door and I just started crying,” she said. Tocci kept coming back every day for a year.

Tocci said talking to Kaplan helps her find the strength to “walk back out and do what has to get done” — caring not only for her patients, but her wife and 15-year-old son.

Inside Hospital, Families Find Refuge With Recliners, Tissues And Cake