While Latino enrollment has lagged in California’s insurance marketplace, Asians have signed up in numbers outstripping their representation in the pool of eligible people.  According to new Covered California data, the overwhelming majority of Chinese, Korean and Vietnamese enrollees are buying plans through certified insurance agents, as opposed to community groups or the Covered California website. 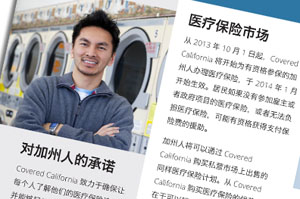 A Covered California brochure in Chinese.

There is no charge to consumers who work with agents, whose commissions are paid by insurance companies.

Since January, Asians have been enrolling in strong numbers. People of Asian descent make up about 14 percent of California’s eligible pool, according to estimates compiled by the UCLA Center for Health Policy Research and the UC Berkeley Labor Center. Asians reached that target straight out of the gate, making up 13.5 percent of all enrollees by January. They have surged from there. In the most recent data from Covered California, which comprised enrollment from Oct. 1 to Feb. 28, Asians made up 22.9 percent of all enrollees.

These numbers “suggest that the Asian agents are a driving force in helping Covered CA exceed our enrollment goal in Asian communities,” Wendy McAnelly, a public information officer for Covered California, said in an email.

This information was not a big surprise to Simon Chew. He runs Ehealth-Plans, an insurance business with four offices in San Francisco. All his agents are trilingual — in English, Mandarin and Cantonese. Chew estimates he’s signed up 2,000 people since the Covered California marketplace opened last October, and half of them were uninsured. He sees a difference between how Caucasians shop and how his clients — overwhelmingly Chinese Americans and Chinese immigrants — shop. While what he calls the “mainstream market” is comfortable purchasing insurance online, those of Chinese descent want to do business face-to-face, with someone of a similar background.

“That’s how, culturally, Asians do business,” Chew said. “They like to stick to their own kind because of communication convenience.” Chew also complained that too much Covered California advertising is focused on the website, as opposed to letting people know that local insurance agents could also help them.

Covered California did not have enrollment information broken down by type for Latinos — who make up nearly half of the marketplace’s potential pool but who account for only 22 percent of all enrollees. Covered California has been faulted for its missteps in signing up Latinos.

Unlike Asians, Latinos are generally not familiar with health insurance as a product, so this can make sign-ups more difficult.

But Asians are not a monolithic group, advocates caution. Doreena Wong is with Advancing Justice in Los Angeles. Her group oversees the single statewide collaborative of community groups that handles outreach to Asians to encourage enrollment on Covered California. She was surprised by the success that brokers have had compared with community groups. “I am surprised that is as high as it is,” Wong said. “I don’t know if that means that most of the enrollees in these communities are English-speaking.”

Community groups have long worried that those with limited-English skills would be left out of Covered California. Wong is concerned that certain immigrant groups who have less experience with insurance or universal health care in their home countries would be harder to reach. “The united Cambodian community, Indian, Pakistani,” she said, “We don’t know what the numbers are for those particular sub-groups.”

Yeri Shon, of the Korean Community Center of the East Bay in Oakland, said her group has had great success in signing up the “monolingual” clients she serves. There’s universal health care in Korea, so people are already comfortable with the concept of the government helping out.

But she’s heard from advocates who say they are having a harder time. “The Tongan community leader says teaching the idea of insurance is very difficult,” Shon said. “In Tonga, people apparently only go to the hospital when they are really sick.”

Mixed-status families a barrier to enrollment

According to the modeling from UCLA and UC Berkeley, there are an estimated 370,000 Asians in Covered California’s pool of potential enrollees. As of Feb. 28, slightly more than 160,000 had enrolled. Some advocates wonder if the better-educated people are the ones who have enrolled, whether Covered California has reached, as Doreena Wong puts it, the “low-lying fruit.”

“As we continue on, it might be more and more challenging and take more effort to reach those who have been discouraged from enrolling or who have had bad experiences,” Wong said.

This story is part of a reporting partnership between KQED, NPR and Kaiser Health News.