LONDON, KY.  — David Combs has been a health insurance broker in this small city in central Kentucky for more than 15 years.  When the Affordable Care Act became law, he read it cover to cover. Then he “panicked” and sold his agency. 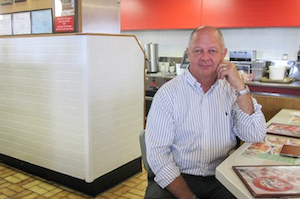 The mainstay of his business had been selling coverage to small companies. And here was the government, stepping in and offering to sell it online instead. Initially, Combs and his fellow brokers thought they would go the way of travel agents, no longer needed in a do-it-yourself online marketplace.

But he started to think about the law in a new way after he learned that brokers could still earn a commission for selling coverage through the exchange. Kentucky built its own health insurance exchange – called Kynect — and to expand Medicaid.

“I knew there was going to be a massive change in our industry, and anytime there’s a massive change, there’s opportunity,” says Combs, who started a new agency in 2013.

Some of the states that were most successful in enrolling consumers on the exchanges embraced brokers. In California, 39 percent of people who signed up for a private exchange plan enrolled with a broker; in Kentucky the number reached 44 percent.

Combs’ key insight was that many of his small business clients could do better dropping their small group coverage and helping their workers sign up for individual insurance on the exchange. The law allows companies with fewer than 50 full-time workers not to offer insurance.

Frisch’s Big Boy, a bustling franchise diner off the highway, is the kind of small business client for Combs. Until this year, their policy was only available to full-time workers, and it was expensive, costing the company and the workers each $150 a month. Few of those eligible at Frisch’s actually bought policies. And on top of that, they were facing an 86 percent rate increase in 2014.

“It didn’t make sense for [Frisch’s] to continue to offer health insurance,” explains Combs. “It was actually a detriment to their employees.”

“I thought to some degree it was too good to be true, what people were paying,” says Frisch’s part-owner Herman Hatfield. “But it worked out to where a lot of people got better care for less money.”

Combs earns a commission of $20 per month for each person he enrolls, including spouses and children. That commission is paid by the insurer and is already built into premiums. He was able to enroll everyone at Frisch’s in just two days.

Enrolling one person by phone, Combs says, might take several hours. But because he is able to tell everyone at a certain business what to bring in advance, such as a pay stub and their Social Security number, he’s able to sign an individual up in just 15 minutes and a family in 30 minutes.

Virtually all of the small businesses Combs had sold coverage to in the past were eligible to make a transition similar to Frisch’s. “We’re running into an industry as many of our fellow brokers are running out, because they’re trying to do [sell policies] on a onesie-onesie basis, and you’ll go broke,” he explains.

Waitress Mary Gray is one of only 12 people at Frisch’s who used to buy the company’s old insurance policy. She ended up enrolling in a silver plan that was completely subsidized: She pays nothing toward her premium. She is one of the 28 employees at Frisch’s who Combs has enrolled in a private Kynect plan – most of the rest of Frisch’s 60 full and part-time employees qualified for Medicaid, while a few had employer-sponsored coverage through a spouse or parent. 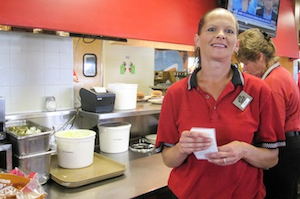 Mary Gray, a waitress at Frisch’s Big Boy in London, Kentucky, is one of 12 people at the restaurant who used to buy the company’s old insurance policy (Photo by Jenny Gold/KHN).

Prior to the health law, Combs says a successful agent might have signed up 14 new small business groups in a year; since Obamacare went live in October, he’s been enrolling that many in a month.

He’s been endorsed by the Kentucky Restaurant Association and holds seminars throughout the state.

But brokers’ roles are not so significant everywhere. Kentucky’s statistic of 44 percent of consumers who bought private plans through brokers compares to just 8 percent nationwide, according to a survey from the Kaiser Family Foundation.  (KHN is an editorially independent program of the foundation.)

In many states, brokers fought against the health law, and against navigators, workers paid with government funds who help people sign up for Obamacare.  But in Kentucky, exchange director Carrie Banahan set up a special committee for brokers and navigators and got them talking.

“We’ve had a great relationship with the agent community in Kentucky,” says Banahan. “It was contentious at first. But once they got to know each other, they built a level of trust and they get along very well.”

The two categories of insurance workers essentially divided the labor in Kentucky. The navigators mainly signed up the poorest people in the state for free Medicaid coverage. The brokers concentrated on those eligible for private exchange coverage, where they could earn a commission.

In addition, Kynect solicited broker advice on making policy decisions and designing the online marketplace, which includes a “Find a broker” feature that helps connect a consumer with a local agent. Upon request, Kynect also created a special help line for brokers to call in with questions.

And in addition to enrolling 35,000 people in private Kynect plans, brokers also enrolled another 20,000 in Medicaid, pro bono.

Combs says that if brokers want to survive, they have to embrace the ACA, even if they don’t like it. “The ones that don’t want to get into it and educate themselves about health reform, I think they are going to become kind of a dinosaur fairly soon,” he says.

But those who can evolve have a huge opportunity. By December 2014, Combs expects his new agency to hit a million dollars in revenue, the most health insurance business he’s done in his 15 years as a broker in Kentucky.