Kids from less affluent homes, even when they have health insurance, are not as likely as others to get vision screenings that can identify conditions like lazy eye before the damage becomes irreversible, a new study found.

Researchers at the University of Michigan examined commercial health insurance claims data between 2001 and 2014 for nearly 900,000 children from birth to age 14. They tracked how often kids at different family income levels visited ophthalmologists and optometrists and the diagnosis rates for strabismus (cross-eyed or wall-eyed) and amblyopia (lazy eye).

The two conditions are relatively common, serious eye diseases in children. Because the eyes are seeing different things, the brain suppresses the vision in one eye. If not corrected by age 10, either condition can result in permanent vision loss. Treatment generally involves glasses, surgery, eye drops or patches, or some combination.

Children in families with the lowest net worth of less than $25,000 a year had 16 percent fewer eye care visits than those in the middle-income category of $150,000 to $250,000, according to the study, which was published in the August issue of Health Affairs. Meanwhile, kids from families with the highest net worth of $500,000 or more had 19 percent more visits to eye care professionals than those in the middle-income group.

“We think that affluence is driving the eye care visit and the visit is driving the diagnosis of eye disease,” said Dr. Joshua D. Stein, the study’s lead author and an associate professor of ophthalmology and visual sciences at the University of Michigan’s medical school. 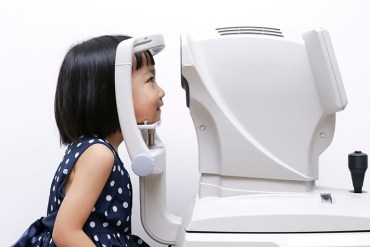 Under the health law, services recommended by the U.S. Preventive Services Task Force, an independent panel of medical experts, are covered by insurance without requiring most people to pay anything out of pocket. The task force recommends that children between the ages of 3 and 5 receive at least one vision screening to check for amblyopia. That recommendation is being updated.