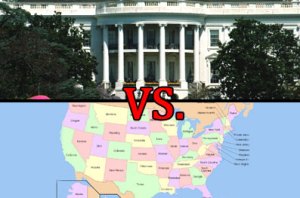 The fight over whether states or the federal government will have more clout in a proposed health insurance marketplace is escalating  and the outcome has big implications for consumers.

This issue is one of the key disputes in the current negotiations between leaders of the House and Senate as they meld their health bills. The House, which would establish a national exchange run by the federal government, argues that setting a uniform program would help protect consumers. The Senate, which wants each state to create and run its own exchange, says states have more experience overseeing insurance plans and know their residents’ needs better.

Health care analysts say the final decision is critical to the choice of health insurance plans workers would receive, how much consumers would pay for coverage and how much clout regulators would have over policing insurers who behaved badly.

Backers of a national approach say that cash-strapped states don’t have the staff or structure to take on the burden of operating a new insurance marketplace-called an exchange in the bills-that will cover millions of Americans. They also fear that state legislatures could be overwhelmed by powerful lobbying efforts of insurers and drug interests seeking to weaken consumer protections.

“The House approach to establishing a federal exchange where we can sort of build it right the first time and get it done is very important as opposed to throwing up a jump ball and letting 50 states figure out all different ways how to make it work,” said Karen Pollitz, research professor at Georgetown University’s Health Policy Institute.

Those who favor the Senate approach say that consumers would get better results calling their state regulators than trying to navigate a new federal structure. “State insurance regulators have a proven track record of swift and appropriate action to protect insurance consumers, while there is no evidence that a federal regulator could or would perform comparably,” officials of the National Association of Insurance Commissioners wrote recently to House and Senate Democratic leaders.

The exchanges would offer individuals who do not have employer-sponsored health insurance and some small businesses a choice of health care plans, providing standardized information on areas such as benefits and cost, making it easier to shop for coverage.

The federal-state debate over health insurance regulation also has powerful political overtones. Liberal Democrats, angry that the government-run insurance plan, called the public option, is all but certain to be omitted from the final package, want the federal government to have as much power as possible over insurers.

The House health overhaul bill would establish a new federal agency, the Health Choices Administration, to oversee the exchange and to regulate the insurers who participate in it.

The House bill doesn’t eliminate state oversight, however. It still would allow state governments to regulate many of the same areas, such as making sure that health plans meet coverage standards outlined in the bill and follow appeals processes on denied claims. States could take enforcement actions against insurers that break the rules. Over time, states that met the federal requirements could establish their own exchanges.

Proponents say that states, even those that do a good job of protecting consumers from insurance abuses, need all the help they can get.  Budget troubles mean that there are too few state regulators trying to monitor insurers. If states have a weak record of regulating insurers, the federal government will fill the gap, they say.

“You start with a strong federal regulatory environment, one that has the rules clearly written and one that has a mechanism to enforce those rules,” said Rep. John Garamendi, D-Calif., a former state insurance commissioner.

But the Blue Cross Blue Shield Association, which favors the state option, said regulatory duplication in the House bill would confuse consumers and create regulatory problems between the federal government and state insurance regulators.

“Where does the consumer go and which one of those mechanisms controls?” said Kris Haltmeyer, deputy executive director of legislative and regulatory policy for the Blue Cross and Blue Shield Association.

Under the Senate’s proposal, some analysts see benefits for consumers because states might experiment with different approaches.

“I think a system that allows different ways of organization and fine-tuning is critically important,” said Stuart M. Butler, vice president of domestic and economic policy studies at the Heritage Foundation, a conservative think tank. “Therefore I favor, very much, a state-based system generally as opposed to a national exchange, which I think can easily become a highly restrictive institution that actually frustrates the kind of continuous experimentation and learning that you get in a competing state system.”

How the exchanges are designed and how they are regulated will be critical to their success or failure, Pollitz said. Billions of dollars in federal subsidies and tax credits will flow there and if the design is flawed it could cost taxpayers even more.

Feds Vs. States: Who Should Run Proposed Health Insurance Marketplaces?