A Los Angeles furniture store worker who had never had health insurance enrolled in a plan for $75 a month that will cover both him and his son.

An unemployed accountant in Charlotte, N.C., who tried and failed to sign up last year found coverage for $11.75 a month.

A self-employed house contractor from West Palm Beach, Fla., found a health plan that will cost him nothing.

They were among more than 100,000 Americans who signed up for coverage Saturday through the Affordable Care Act’s online insurance exchanges, which launched this weekend with far fewer problems and less fanfare than last year. Many people qualified for federal subsidies that kept their monthly premiums well under $100.

“The vast majority of people coming to the site were able to get on and do what they were intending to do,” Health and Human Services Secretary Sylvia Burwell said Sunday on NBC’s Meet The Press, adding that 500,000 people had signed onto the website.

By most accounts, the federal marketplace that handles enrollment for 37 states ran smoothly — a far cry from last year’s disastrous rollout that turned www.healthcare.gov into an embarrassment for President Barack Obama, spurred several staff departures and made the site virtually unusable for two months.

State exchanges that had encountered big problems last year — including Maryland, Massachusetts and Hawaii—all reported no major issues this weekend.

Still, there were some hiccups, with consumers and enrollment counselors facing sporadic delays accessing the website to set up an account and buy coverage. Some of those who bought coverage last year had trouble getting into their accounts because they had forgotten their passwords.

Meanwhile, the insurance exchanges run by 13 states and the District of Columbia functioned well — with the exception of the one in Washington state, which was shut down Saturday because it was giving out incorrect subsidy information. The site was fixed and back online Sunday morning.

To give consumers assistance, enrollment events were held across the country over the weekend, at hospitals, clinics, churches, community centers, malls, libraries – even at the Rock and Roll Hall of Fame in Cleveland.

“It was awesome,” said Joy Floyd after she got help buying a plan for $11.75 a month at the Children and Family Services Center in Charlotte, N.C. She had tried and failed to sign up for coverage last year because of website problems.

Like most enrollees, Floyd will face additional cost-sharing as a result of deductibles and co-pays when she sees doctors, gets tests or buys prescriptions.

Despite this year’s far smoother opening, the enrollment process continues to face plenty of uncertainties, including the response of a confused and still uninformed public, among them 20 million uninsured who did not enroll the first year; a shorter enrollment period and premium increases that many of the 7 million people who bought coverage last year will face unless they shop around.

Recent political and legal developments also cast a shadow, including a hostile GOP taking control of Congress in January and the Supreme Court’s decision to hear a challenge to the subsidies that millions of people have relied upon to reduce the cost of their coverage.

Ricot Telcy, 37, a West Palm Beach, Fla., security guard, knew nothing about the legal challenge, but was pleased to learn he and his wife could get coverage for about $300 a month—about the same price his wife had been paying for herself.

Across town, at an event at a medical society office, Rick Pierre, 40, enrolled in about an hour in a plan that will cost him nothing in premiums because he qualifies for a large subsidy. “I’m very excited,” he said.

The Obama administration expects about 9 million people to get coverage on the exchanges before open enrollment ends Feb. 15. The marketplaces are a cornerstone of the health law because they help expand health coverage to millions of Americans who do not get health coverage at their jobs. More than eight in 10 people buying policies last year received a government subsidy to lower their premiums.

People must enroll by Dec. 15 if they want their coverage to start in January. In most states, those who bought coverage last year will be re-enrolled automatically if they do nothing by that date – a scenario that could result in higher costs since most premiums and benefits are changing.

The exchanges and the publicity around them also spurred millions of people to sign up for Medicaid, which has expanded eligibility under the health law in 27 states.

Some Wrestle With Higher Premiums, Confusion

In Philadelphia, Joseph Krakauskas, a retired 62-year-old, showed up two hours early at an enrollment event to secure a place at the front of the line. He has just found out that his current premiums were going to triple next year and he needed help finding a new plan. “This is almost like a bait and switch,” he said of the rate increase. “I can’t believe they’re getting away with this.” 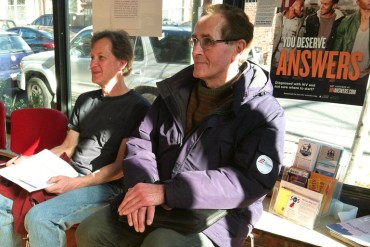 Krakauskas wasn’t able to access his account through the website, however. Still, a counselor found him an HMO plan for $128 a month, higher than he was paying last year, but about half of what his old plan would cost in 2015.

Despite the government’s efforts to streamline the application, confusion and difficulty navigating the website also brought in many people, including Sarah White of Philadelphia, a mother of two.

“I have a doctoral degree,” she said. “The fact that this is so complicated for even someone with [her education] is ridiculous. But here I am trying to get help and I have hope.”

Demand for coverage was particularly high in California, where 1.2 million residents signed up for coverage last year.

By 9 a.m. Saturday, dozens had lined up for a festive enrollment event in Los Angeles sponsored by SEIU-United Healthcare Workers West. Most of the applicants came prepared – holding envelopes with pay stubs, birth certificates and Social Security cards. As each finished signing up, volunteers cheered, applauded and snapped photos.

Alejandro Irigoyen, 45, said he missed the deadline last year and didn’t want to risk doing that again. When he injured his foot recently, he paid about $500 for a doctor’s visit, X-rays and medicine. With the help of an enrollment counselor, Irigoyen signed up for a plan which will cover both him and his 23-year-old son for about $75 a month. 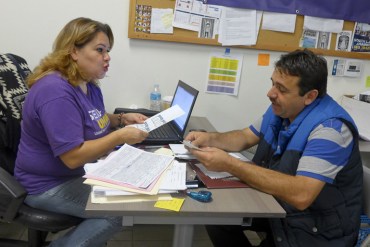 Enrollment counselor Norma Montenegro helps Alejandro Irigoyen, 45, sign up for a plan through Covered California. Irigoyen says he had never been covered before (Photo by Anna Gorman/KHN).

The enrollment event took place in a heavily Latino neighborhood, and most of the counselors spoke Spanish. California exchange officials had been heavily criticized last year for not doing enough to reach out to the state’s large Latino population. Several of the families at Saturday’s event said they hadn’t previously enrolled in coverage because they have family members who are in the country illegally and feared telling the government too much.

After being reassured their information wouldn’t be given to immigration authorities, Crescencio Lorenzo, 48, a legal resident, came to the enrollment event with his daughter, Andrea, a U.S. citizen, and his wife, Susana Lorenzo, 48, who is in the country illegally. He and his daughter enrolled in Medicaid. “They told us not to worry,” about jeopardizing his wife, he said.

Weather And Glitches Are Issues In Ohio, Washington

Some enrollment events failed to draw consumers, including the “Rock Enroll” event at Cleveland’s Rock and Roll Hall of Fame. Officials blamed snow. By mid-afternoon, Barb Wynveen, a navigator with the Carmella Rose Health Foundation, said she’d had no walk-ins, and all of her half-dozen scheduled appointments had been a bust.

There was more foot traffic at Northeast Ohio Neighborhood Health Services, a community health center primarily serving the poor. Counselor Khalil Ismail met with Prempal Kaur, a woman in her 50s who spoke mostly Punjabi, and her daughter, Ravinder Kaur, who translated.

“She’s a citizen. She’s a widow, a single mother,” explained Ravinder Kaur, who had traveled from Chicago to help her mother apply for insurance coverage. “And she works at the Convenient Food Mart, where she makes minimum wage.”

Before she left, Prempal Kaur was enrolled in Medicaid.

In Washington state, meanwhile, the shutdown of the website to fix a glitch led people to start filling out applications the old-fashioned way — with paper and pen.

“It’s incredibly frustrating,” said Gary Zablocki, a 51-year-old carpenter at an event at the Southcenter Mall in Tukwila, a Seattle suburb.

Joanna Richards at WCPN in Cleveland , Elana Gordon at WHYY in Philadelphia, Ann Doss Helms at The Charlotte Observer, Nick Nehamas at The Miami Herald, Lisa Stiffler and Patrick Marshall at The Seattle Times, Jordan Shapiro at the St. Louis Post-Dispatch, Wes Venteicher at The Chicago Tribune and Robert Calandra at The Philadelphia Inquirer also contributed.