In the past 20 years, the number of companies that provide retiree health coverage has dropped dramatically, leaving seniors with the difficult task of choosing among a variety of plans to supplement their Medicare benefits. It is a choice that can be confusing and has large financial implications. 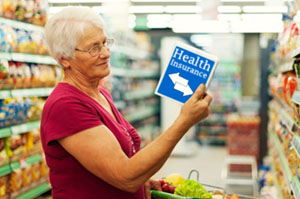 But a move by some employers is softening the blow. They are contracting with companies that operate insurance marketplaces, called exchanges, where Medicare-eligible retirees can enroll in plans to replace what they used to get from the employer. Working with a counselor, retirees can figure out what coverage best meets their needs – determining, for example, whether to buy Medigap and prescription drug plans or to join a Medicare Advantage plan. (Counselors typically rely on salary but sometimes other sales incentives may factor in their compensation.)

In 1993, 40 percent of employers with 500 or more workers offered medical insurance to their Medicare-eligible retirees, according to human resources consultant Mercer’s annual survey of employer health benefits. By 2011, that figure had fallen to 16 percent.

Many employers that contract with exchanges such as Extend Health, which offers 4,000 plans from 80 carriers, fund at least part of the coverage by making deposits for their retirees into accounts called health reimbursement arrangements, or HRAs.

The exchanges can benefit both employers and retirees, experts say.

Employers’ costs are capped and predictable, with fewer administrative hassles, says Bruce Richards, chief actuary and quality leader for Mercer’s health-care business. Meanwhile, because retirees can pick among different plans and rates, “usually most people are better off,” he says.

Several exchanges have emerged in recent years. They may work with both employer clients and individual insurance buyers. Some offer a range of products from different insurers, while others offer only one insurer’s plans.

Priscilla Wiblin of Crownsville, Md., retired from a large technology company in 2008, and has been paying $40 a month for a retiree plan that helped fill in the gaps that Medicare didn’t cover.

This year, everything changed. The company discontinued its supplemental coverage and instead gave retirees $250 a month to buy coverage on their own.

Wiblin got a phone call from a benefits adviser at Extend Health, who offered to help her find private coverage on the exchange.

Wiblin’s main concern was to ensure she had good drug coverage because she has multiple sclerosis and requires a daily injection of a drug called Copaxone . Co-payments varied; at one point in her company plan, she paid $1,200 monthly.

The $250 she now receives every month almost covers her regular health-care costs. She pays $99.90 a month for Medicare Part B, which covers outpatient care and doctor’s visits. (Part A, hospitalization coverage, is free.) She also pays $150 a month for a Medigap supplemental plan to cover deductibles, coinsurance and other care not covered by Medicare, and $26 monthly for a Medicare prescription drug plan.

Because she receives help covering the cost of Copaxone from a co-payment assistance program sponsored by Teva, the drug manufacturer, her monthly drug payment is $10.

Working with the exchange was a good experience, she says. “Not only did they do the research for me, they enrolled me in auto-payment,” Wiblin says. “I don’t write any checks.”

The personal assistance that retirees receive through an insurance exchange may ease the transition to private coverage. But financial aid from their former employer may be even more important. And that’s not always a sure thing.

For example, a few years ago Xerox discontinued the subsidies it had been giving some Medicare-eligible retirees to buy supplemental coverage, says Dave Ferren, vice chairman of the Association of Retired Xerox Retirees.

“That was a ton of money out of pocket,” he says, estimating that it cost couples up to $4,000 annually.

About a third of employers that provide retiree medical insurance told Mercer that they may drop it in the next five years. If they were to drop coverage, 42 percent said they’d do so without providing subsidies to help retirees buy coverage.

Even if they have access to an insurance exchange, seniors face challenges. If the employer does provide a subsidy through an HRA, “is it sufficient or equivalent to what the employer was subsidizing before?” asks Paul Fronstin, director of the health research program at the Employee Benefit Research Institute.

Other potential sticking points: Does the money roll over from year to year if it isn’t used? Do the contributions increase over time as premiums go up?

Fronstin says another potential downside for seniors is that exchanges may actually present them with too many options.

“We all think that choice is good,” he says, “but too much choice can be overwhelming.”