The attraction of the 2010 health law for insurance companies is obvious: Millions of new customers and billions in new spending. Those dollars will flow through state exchanges, online marketplaces where customers can shop for insurance. 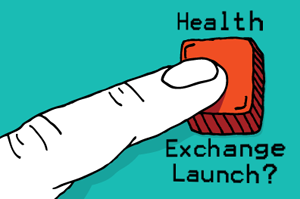 “This is the largest expansion since the Medicare program in 1965,” said Kelly A. Barnes, health industries leader for PricewaterhouseCoopers, an accounting and consulting firm. “When you look at that from a business perspective, you’ve got a market that you’ve never been able to participate in before.”

Insurers are spending big dollars on marketing, technology and risk analysis of the new health care landscape. But with exchanges supposed to go live in late 2013, where and how companies will plunge — and how deep — is far from clear.

Few states beyond Maryland and California seem on schedule to start enrolling exchange clients in October 2013. Even there insurers are still engaged in basic calculations of what to offer with which medical providers in which markets.

Elsewhere governors are delaying or refusing to even contemplate exchanges, increasing the odds that the job of running them will fall to a federal government that is also seen as behind schedule.  Only 16 states met Monday’s target date for defining which benefits will be considered essential in the new plans.

There is also the uncertainty of the November election, in which Republican gains could reverse funding or even legal authority for the exchanges.

Perhaps it’s no wonder that the details of insurer exchange strategy — and with them the prospects of millions now lacking coverage — are still in flux.

“The management teams all have a positive spin on things, [saying] ‘Jan. 1, 2014 is coming. We need to be ready. It’s a good volume opportunity,'” said Thomas Carroll, who follows the industry for investment house Stifel Nicolaus. “No company will come out and say, ‘Here are the states where we’re going to operate through an exchange in 2014.'”

Expected to eventually cover more than 20 million Americans, state exchanges are supposed to offer insurance coverage, much of it subsidized, in an online, easy-to-compare marketplace. But without enthusiastic participation by private insurers, the exchanges won’t work.

“For the insurance company, this becomes an opportunity, but it also represents a risk,” said Brett Graham, a consultant at Leavitt Partners who advises insurers on state exchange strategy. “Are there insurance companies saying, ‘Whoa, this is coming too fast, we don’t have information and we’re going to sit this out’? It may be too early to answer that question.”

WellPoint, the country’s second-biggest health insurer and the owner of Blue Cross franchises in more than a dozen states, shows every indication of planning to sell aggressively through exchanges. Like many plans, which have been accustomed to gaining customers through brokers and employers, the company is trying to sharpen its ability to sell directly to consumers not only through state exchanges but through private exchanges offered by employers.

“You are going to have to market in a more retail environment — something that this industry hasn’t had to do historically,” Wayne DeVeydt, WellPoint’s chief financial officer, said at an investor conference last month. “And branding is going to become even more relevant. This year alone WellPoint is spending almost $50 million in branding for the Blue Cross Blue Shield brand and we would expect those branding dollars would continue.”

Carriers are refining smart-phone claims apps, consumer advertising and shopping tools for patients to find better and lower-cost caregivers. Blue Cross and Blue Shield of North Carolina, in a state where bills to create an exchange failed in this year’s legislature, may mimic Florida Blue and other plans by opening member stores, said Michael Parkerson, the company’s vice president of marketing.

Recent decisions by WellPoint and Aetna to buy Medicaid managed care companies are seen as a way not only to profit from the Affordable Care Act’s Medicaid expansion but also to create marketing channels for exchange plans. As members switch between Medicaid and exchanges as their employment and income fluctuate, the thinking goes, offering plans in both programs will help keep the business.

California is as far along as any state in exchange preparation. But even there, Blue Shield of California is far from finalizing its provider networks, benefit menus and pricing for the exchange.

“There’s a health reform team that has been working on this for 18-plus months. It’s a massive effort on our part,” said company spokesman Stephen Shivinsky. “How do you migrate our current product portfolio to what the new portfolio is going to look like?”

Premiums are a big unknown. Without experience in covering millions who had previously been out of the market, some analysts expect carriers to play it safe with relatively high prices. That makes coverage less affordable.

“Private sector health plans are probably going to be pricing fairly conservatively for the first year, maybe for the first couple of years,” the investment analyst Carroll said.

But the biggest question is whether many states will be ready to offer exchange plans at any price. The first open enrollment season is supposed to run from October 2013 through March 2014, with the first coverage starting Jan. 1, 2014. If Democrats keep control of the White House and Senate in the November elections, thus ensuring survival of the health law, many states are expected to start implementing it.

The states have until mid-November to submit exchange plans to the Department of Health and Human Services. But by then there may not be time to set them up.

“Given the regulatory variation from state to state —and many states have not yet formalized their exchange models —we have not yet made any decisions about where we will be offering our health plans through the exchanges,” said Daryl Richard, a spokesman for UnitedHealthcare, the country’s biggest private health insurer.

“We don’t have the rules of the road we need to make those kinds of public pronouncements” on what plans will be offered where, said Cigna spokesman Joseph Mondy.

Nor do many have confidence that the Department of Health and Human Services, which is responsible for setting up exchanges if states balk, will come to the rescue.

“There are huge, huge issues here,” said Robert Laszewski, a consultant and former insurance executive who believes at least 35 states won’t be able to open exchanges on their own on time. “I’m wondering how the government is going to be building 35 exchanges in 35 states to be ready on Oct. 1. And they’re not telling us how they’re going to be ready.”

Insurers still seem optimistic that a coverage mandate for most people and billions in federal subsidies to help pay the bill will eventually generate large new books of business.

They just don’t know what that path will look like or how long it will be.

Insurers Get Ready For Exchanges, But Exchanges May Not Be Ready For Them