When movie stars become unbankable, they’re no longer a slam dunk at the box office. When investments become unbankable, they’re relegated to the junk pile. For ordinary Americans deemed unbankable, those who don’t have a traditional checking or savings account, it can be hard to simply pay bills. And that is about to become a big problem for those who also lack health coverage — and for the health insurance companies trying to sell them coverage. After all, how do you sell a product to a customer who has no way to pay you? 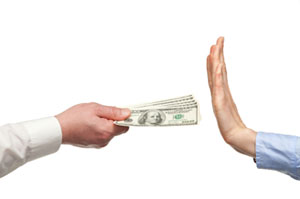 One in five households in the United States, or about 51 million adults have only a tenuous relationship with a traditional bank, relying instead on check-cashing stores and money lenders, according to the Federal Deposit Insurance Corporation.

The new federal health law which requires most Americans to carry health insurance starting in January presents a particular problem for those households, since most health plans accept a credit card for the first month’s premium payment and then require customers to pay monthly with a check or an electronic funds transfer from a checking account.

Those options won’t work for the so-called “unbankables” looking to purchase health coverage with federal subsidies through online insurance marketplaces, said Dan Schuyler, a director at Leavitt Partners, a firm that is advising private insurers and states on how to comply with the law. “You don’t want to take these millions of unbankable people through the entire enrollment process and then at the end of line say, ‘Ok the only way you can pay for your share of the premium is with a bank account number,’” he said.

The consequences could be severe: After all, when your cable gets turned off, you miss The Walking Dead or Pawn Stars. When your insurance is canceled, starting next year, you’ll be breaking federal law and liable for any medical bills.

Researchers who study consumer financial behavior say people have good reasons to spurn banks. New immigrants, for example, may have distrusted the banks in their home country and brought that skepticism with them to the U.S., and moderate income earners on tight budgets have been stung, they say, by bounced checks when banks unknowingly re-order their transactions. The overdraft fees and checking account fees charged by traditional banks can upend the delicate, and often precarious, financial balance of these households.

“The bank account is extremely stressful when you don’t have a job that’s reliable,” said Tran, a 25 year-old community organizer and Ivy League graduate who lives south of San Francisco, California.

Her current employer does not offer her health benefits, and she was turned down, she said, when she applied for health coverage on her own. Tran hopes to get hired to a full-time position and asked that we use just her last name so it didn’t give her bosses a bad impression.

Tran said when she took her new job and no longer had direct deposit, Bank of America began charging her, up to $12 a month. “I was not happy with the charges,” she said.

Consumers who will be required to purchase health coverage will need payment options that are simple, easy and affordable, say consumer advocates and health care experts.

“I think there is a dawning awareness that this is a large problem,” said Brian Haile, senior vice president for health policy at Jackson Hewitt Tax Service. Up until last year, Haile was wrestling with this problem on behalf of the state of Tennessee where he served as director of the Insurance Exchange Planning Initiative. “We raised these issues with the federal government well over a year ago and in a series of about four or five letters.” Haile said he did not get much of a response then.

Indeed, neither the Affordable Care Act, nor any other federal health laws, require health insurers to accept all forms of payment, including credit cards or the cash-loaded, pre-paid debit cards that people without bank accounts often rely on. Federal officials are wary of doing anything to discourage insurance companies from selling plans on the exchanges, say current and former state health officers who have pressed the U.S. Department of Health and Human Services for a ruling.

One of the largest players on the new exchanges is likely to be WellPoint, a Blue Cross and Blue Shield licensee. In an email, a WellPoint spokesperson said the company was “evaluating expanded payment options to members.” Other health plans, including Cigna and UnitedHealthCare, urged state officials in planning documents to allow companies to set their own payment policies.

Federal health officials issued a letter in April stating that all health plans selling coverage in the federally-run insurance marketplaces in 28 states will have to accept payments in ways that do not discriminate against their customers, but did not prescribe what those payments should be.

Insurance carriers are in a pickle since the transaction fees for credit cards and pre-paid debit cards can run as high as 4 percent. If only one company takes the plunge, its costs are likely to be higher, scaring away customers.

Pre-paid cards, popular with low-wage workers, come with other potential hazards. “If you accept re-loadable debit cards, are you in fact getting folks with lower health status?” said Haile. “That’s a real risk when you’re in the insurance business. So you can’t be the only one picking up those risks.”

Haile has called on federal official to set a uniform national standard requiring all insurers to accept all forms of payment, including credit cards, pre-paid cards and money orders.

Massachusetts, several years ahead of the rest of the country on health insurance reform, prohibited credit cards on its online marketplace because the fees were too high, said Jon Kingsdale, former executive director of the Massachusetts Health Connector. Consumer advocates who want moderate-income families to have easy payment options are themselves wary of credit card late fees and high-interest charges for those who can’t pay off their monthly balance.

For now, it is a problem with no elegant solution. Pre-paid debit cards and credit cards could be options if the federal government steps in to negotiate lower rates with the card companies as it did for tax payments to the Internal Revenue Service, say consumer advocates.

As for Tran, she pays her student loans with a money order, and figures she might do the same when she’s required to buy health insurance starting in January. “I hope I’ll get a permanent job with benefits by then,” said Tran. “You hope for the best and plan for the worst.”

How Will The ‘Unbanked’ Buy Insurance On The Exchanges?