It’s called “patient dumping” – when hospitals transfer patients without insurance to public hospitals. But a new study from Stanford University has turned dumping on its head. It finds that hospitals are less likely to transfer critically injured patients to trauma centers if they have health insurance.

Researchers at Stanford University looked at more than 4,500 trauma cases at 636 hospitals around the country to see what happened to critically injured patients brought to emergency rooms that aren’t designated trauma centers. They found that non-trauma centers were much more likely to admit patients who had insurance, whether it was private insurance or Medicaid coverage, than to transfer them to more skilled facilities. 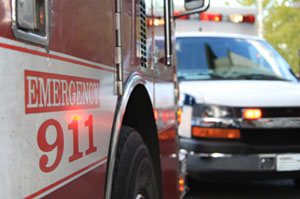 “It’s the opposite of the overly aggressive transfer of a poor patient,” said Dr. Arthur Kellermann, the dean of the U.S. Military Medical School, and a trauma care expert who was not involved in the study. “This is actually suggesting that patients who have coverage for critical injuries may not be getting transferred as quickly as they should be.”

The study didn’t assess how patients at non-trauma centers fared. The researchers excluded patients over 65, and only looked at patients who were admitted or transferred. Dr. Kit Delgado, the study’s lead author and former Stanford emergency medicine instructor, says critically injured patients “admitted to hospitals that are not trauma centers are at risk for worse outcomes.”

It’s unclear just who makes that decision to admit or transfer. Emergency physicians and nurses typically don’t know whether their patients are insured. But Delgado, who is now an emergency care researcher at the University of Pennsylvania, says hospital administrators often weigh in on where uninsured patients end up, and that same dynamic could help explain why non-trauma centers are reluctant to give up paying customers. “As an emergency physician,” Delgado said, “you may get a tap on the shoulder by a case manager that suggests that you should consider transferring the patient out to a hospital where they can be taken care of and they’re willing to accept them without insurance.”

The business of medicine too often dictates where patients are cared for, said Kellermann, and that includes whether a hospital admits patients or transfers them. “That decision should not be influenced by economics one way or the other. It should be influenced only by what’s in the best interest of patients,” he said.

It’s not the first time researchers have found hospitals holding on to insured patients: low-birth-weight babies do better at high-volume neonatal intensive care units, but babies covered by insurance are less likely to be transferred.

Still, there may be other reasons why patients aren’t transferred to hospitals with more expertise: Delgado is currently researching whether patients prefer to stay at their local community hospital instead of being moved to a trauma center that may be a public hospital or located in an inner-city area. If that’s the case, Delgado says hospitals need to do a better job educating patients about where the best care is available.

Insurance, Not Injuries, May Determine Who Goes To Trauma Centers