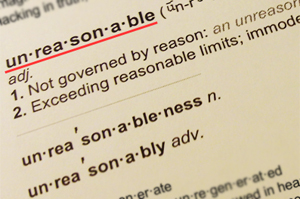 When Wellpoint proposed up to a 39 percent premium increase for some of its California customers, it touched off a storm of criticism that helped boost passage of the new health care law.

Now, state and federal officials are wrestling with how to define “unreasonable” premium increases, a thorny issue Congress has handed regulators.

The definition is critical because the law requires review and justification for premium increases deemed unreasonable, starting this year. Federal regulators do not have authority to outright deny rate increases, although the provision could help them pressure insurers hold down premiums.

But just what is unreasonable? While consumers might object to any increase over the rate of inflation, that’s likely too simple a test to make it into final regulations.

Even the National Association of Insurance Commissioners, representing appointed and elected state regulators, could not reach consensus on a single definition. Instead, the NAIC sent a letter last week to the Department of Health and Human Services suggesting 11 options for defining a “potentially unreasonable” premium increase.

“We didn’t think it would be reasonable to have a discussion on whether X is 2 percent or 10 percent or 30 percent, but to say, here are the alternatives,” said Julia Philips of the Minnesota Department of Commerce, during a call Tuesday with NAIC members studying the issue.

The association is playing a key role in helping shape these and other regulatory issues arising under the new law, including consulting with HHS on how insurers calculate and report the amounts they spend directly on medical care.

Under the law, states retain authority to oversee health insurance premiums. Regulation now varies widely: Some states review rates and may deny increases before they go into effect, the NAIC letter said. Others allow insurers to put new rates into effect and examine them only if questions are raised. States also differ on the types of insurance regulated. Typically, they do not review rates for large, self-insured employers, which pay medical bills themselves. Those employers are also exempt from the rate review regulations in the new federal law.

America’s Health Insurance Plans, the largest industry group, has warned NAIC against adopting a definition that is “arbitrary.”

It encouraged regulators to evaluate whether a rate is “reasonable,” based on such factors as an insurer’s ability to pay estimated claims costs.

On the definition of unreasonable, the NAIC letter to HHS said that, in the states that review rates, most simply look at all rate increases, not just those that fail some sort of test. Special consideration is sometimes given to newer or smaller insurance companies, the NAIC said, because they may need larger increases to offset start-up expenses or higher-risk policyholders who have big medical costs.

Those included: Average increases above a certain percentage; those that exceed the consumer price index by a particular percentage; rates that cause an insurer to lose money, but gain market share, and those aimed at covering excessive administrative costs.

In hesitating to pick one standard or a certain percentage, Philips noted that even a zero increase might be unreasonable, if an insurer was at the same time cutting benefits offered in the policy.

Coming up with a definition of unreasonable  along with some of the other standards called for by the new law  is difficult in part because insurance plans and current state rules vary so much, said Kim Holland, Oklahoma’s insurance commissioner.

“One of the greatest challenges we will encounter is developing uniformity without trying to force everything into a one-size-fits-all,” Holland said.