One recent morning, 86-year-old Evelyne Lois Such was sitting at her kitchen table in Denver when the phone rang.  She didn’t recognize the phone number or the deep voice on the other end of the line. “He asked if I was a senior, and I said yes, and he said we are sending out all new Medicare cards and I want to make sure I have all of your statistics correct,” Such recounts. 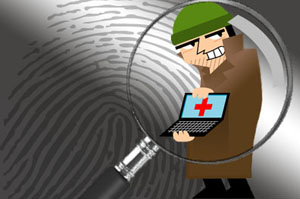 At first, the caller didn’t seem too fishy; he started by running through her address and phone number, just to make sure they were right. But then he read off a series of numbers and asked if it was her bank routing number. “I didn’t know really at the time whether it was or not, but I just said no. He said, well could you give it to me so I’ll have it correctly, and I said, well I’m not so sure about that. And he started to say something and I hung up.”

When the scammer tried calling her a second time, she hung up immediately, scribbled down the number from her caller ID and dialed Medicare to report the scam.

“I kind of thought it was funny at first, and then I thought, you know, how dare they?” says Such. “There are some seniors who aren’t well and don’t think as well as they used to, and it just made me angry that they would be victimized like this.”

Law enforcement agencies are reporting an increase in these sorts of health insurance scams across the country. Many of the fraudsters seem to be preying on the public’s confusion over the massive changes taking place in the nation’s health care system.

Seniors are often targets — they’re more likely to be home to answer the phone, and they tend to have retirement savings that scammers hope to tap.  But they aren’t the only victims: The federal government received nearly 83,000 complaints of “imposter scams” last year—up 12 percent from the year before.

Recent polls have found that well over half of Americans say they still don’t understand how the new health law will affect them.  “Crooks are playing on that confusion. Confusion is a crook’s best friend,” says Quiggle.

“Fraudsters are as attuned to what’s going on in the news as anybody else,” says Lois Greisman, who runs the division of marketing practices at the Federal Trade Commission. “Before Katrina hit land, websites were up soliciting funds to help victims of Katrina. This is not a surprise; this is par for the course.” A program as vast as the health care overhaul makes for a dangerous twist on the regular scams, she adds.

Greisman and her team are working to take down the scams as quickly as possible, but there is an endless number; scammers range from just your average amateur looking to make a quick buck, to well-organized crime rings that mass-produce fraud.

“The first line of defense is don’t take a call from out of the blue from anyone who’s offering to help you navigate the new health care market,” cautions Greisman. “Those kinds of cold calls just shouldn’t take place, same thing with an unsolicited email, an unsolicited text.”

Many people see through those sorts of simple scams, says Sally Hurme, an elder law attorney at AARP.  “But even if one in a thousand falls for the scam and gives up info or agrees to send information off to who knows where, they’ve made [the scammer’s] day. That’s what their job is,” says Hurme.  As the Affordable Care Act ramps up, the country is likely to see more frequent insurance scams, and they’re likely to get more sophisticated, she adds.

Savvy senior Evelyne Lois Such offers this advice for others who get a suspicious call: “Don’t answer too quickly. Think about the answer you give them and what they’re asking.” And never give up any personal or financial information over the phone.

Better yet? Just hang up.

Seniors Get Hung Up In Health Care Scams