Despite numerous problems with the health law rollout, WellPoint CEO Joseph Swedish told analysts last week he was still “confident” in the company’s bet to be the biggest seller of Obamacare insurance. 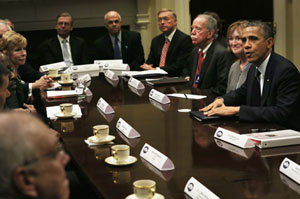 Two days later President Barack Obama changed the rules. Suddenly subscribers who were expected to buy coverage through the health law’s marketplaces from WellPoint, the nation’s No. 2 medical carrier, may end up keeping the plans they have now.

But the switch doesn’t just pose a potential quandary for consumers, who may have to weigh the convenience of staying pat against the option of better benefits and possible subsidies available in the marketplaces.

It changes the calculation for insurance companies. In states that go along with Obama’s suggestion, it raises the chances that marketplace plans will lose money — adding a new threat to the long-term success of the health overhaul, some argue.

“The winner’s curse is looming really large” for companies like WellPoint that bet heavily on the ACA marketplaces, said Seth Chandler, a law professor and insurance specialist at the University of Houston. “To the extent that the fix succeeds [by keeping people in current plans], it will destabilize an insurance market that is already in really bad shape.”

Not every medical plan sold directly to individuals and families will be eligible for renewal under Obama’s order. And some carriers may decline to extend coverage because it’s unprofitable or they don’t want the administrative hassle.

Washington, Minnesota, California and several other states have already said they’ll prohibit extensions. For plans that do get renewed, premiums could rise for 2014 because of routine health care inflation.

Many current holders of individual policies are believed to be healthy adults whose enrollment is deemed essential to the success of the marketplaces, also known as exchanges.

If they keep their old coverage, “that’s going to upset the applecart” for WellPoint and other companies offering low-priced exchange plans on the assumption they would get a balance of the healthy and the sick, said Steve Zaharuk, an analyst for Moody’s Investor Service.

Existing customers are generally healthy, analysts say, because until now insurers have been allowed to bar people with pre-existing conditions.

But that changes starting Jan. 1, when anybody — even a late-stage cancer patient — can join an exchange plan and pay the same rate as everyone else the same age.

Letting insurers renew plans adds to other problems — such as the dysfunctional, computerized enrollment systems — that threaten the marketplaces, many believe. People with chronic illness who badly need coverage are more likely to spend hours navigating balky websites or enrolling on paper than those with no immediate need of a doctor.

Together those factors increase chances that exchange plans will lose money, Moody’s warned clients Monday. That could set the stage for sharp premium increases in 2015, some say.

If healthier, younger subscribers keep their old plans, “it is almost a given that the premiums on the exchange products would prove to be insufficient,” Zaharuk said.

But WellPoint also covers more of the existing individual market of 14 million subscribers than anybody else, with nearly 2 million clients. The company should “aggressively renew existing plans because they can’t fall behind” by losing those customers to competitors, said Christine Arnold, who follows insurance stocks for Cowen & Co.

Florida Blue, the Blue Cross plan in that state, already made a similar move, offering to extend coverage for 40,000 people who were due to lose their existing plans in December, and as many as 260,000 more whose policies expire next year.

The decision to renew should be easy for the country’s biggest medical insurer, UnitedHealthcare, and its 1 million members with individual coverage, because it has few exchange plans at risk, analysts said. Through spokespeople, WellPoint and United said they were still evaluating Obama’s offer.

Not everybody sees renewal opportunities for insurers and customers as a big threat to online marketplaces.

“These numbers are relatively small, in terms of people who might renew their policies,” said Sara Collins, a vice president at the Commonwealth Fund.

Even if existing plans are extended into next year, the customers who choose this option aren’t eligible for subsidies that could generate discounts of thousands of dollars on exchange policies, depending on income, Collins said.

Those tax credits could make marketplace plans more attractive for consumers with renewal options. On Thursday Families USA, which supports the health overhaul, said 71 percent of current individual-insurance customers are eligible for exchange subsidies or the ACA’s expanded Medicaid coverage in states that allow it.

Collins also thinks computer problems will abate. Even if plans experience costs higher than expected, she predicts risk-sharing pools that shift money from profitable carriers to unprofitable ones will minimize losses.

Insurers selling through the exchanges “have got to be very scared that the risk pool is going to be far worse than they anticipated,” he said. Losses could be high enough that federal dollars will be needed to stabilize the marketplaces beyond the law’s existing shock absorbers, he added.

The administration has already signaled its willingness to consider adding protections. The stock market seems to assume they’re a done deal, Arnold said.

Given the stakes, she said she was surprised insurance shareholders “were not more jittery” on the news of Obama’s decision.

Instead, insurance stocks have risen.