A sharp cut in breast pump payments by the nation’s second-largest health insurer has prompted a strong reaction from breastfeeding advocates, who warn that some new moms will not get the pumps they need and fewer babies will be breastfed.

Starting last month, Anthem Inc. slashed the rate it reimburses medical suppliers for breast pumps by 44 percent — from $169.15 to $95. The move means some breast pumps that used to be free under a provision of the Affordable Care Act will now entail a cost to consumers, according to the advocacy group MomsRising. More complex pumps, which have always required an out-of-pocket payment, will now be more expensive. It’s unclear how many women will be affected.

The lower payment rate applies to all commercial health plans sold by Anthem, which provides medical coverage for 40 million — or about 1 in 8 — people in the United States. The rate will not affect Anthem-run Medicaid plans, company spokesman Eric Lail said.

Anthem says that a variety of high-quality breast pumps will still be available to nursing moms at no cost, as required by the ACA.

But the lower reimbursement appears to be limiting the number of free pumps available to Anthem enrollees as medical suppliers charge them for the shortfall on models that the old Anthem rate used to fully cover.

The cost of a breast pump can vary widely, depending on the model and whether it is purchased directly from a retailer or with insurance through a medical equipment supplier. Retail prices range from as little as $12 for the most basic pumps to $400 for the higher-end ones. Some hospital-grade pumps, which can cost several thousand dollars, are typically rented by moms for roughly $80 a month.

But the amount insured consumers pay, if anything, is based on the prices their health plan negotiates with suppliers, which can be lower than retail.

Anthem declined to reveal any prices on the range of pumps it offers but listed a handful of “popular” pumps its enrollees can get for free.

“Anthem recognizes the positive health benefits that breastfeeding can have on mothers and their newborns,” the company told California Healthline in an emailed statement. “The recent [rate] adjustment … will not impact the ability of any new mother to access a high-quality, standard double electric breast pump from our contracted medical suppliers.”

To comply with the ACA’s free breast pump mandate, commercial insurers have offered certain models at no cost. That has saved families hundreds of dollars, since breast pumps often were not covered at all before the ACA. Some state Medicaid programs, including Medi-Cal, also provide this coverage.

But the no-cost pumps do not work for all mothers, experts say. Breast pumps vary from manually operated ones to electric ones to the much stronger hospital-grade variety. The design or capacity of one pump may fit the needs — or bodies — of some women but not others.

Some mothers, for example, need to pump more milk because their babies have medical conditions that make it difficult for them to drink directly from the breast. Other mothers, returning to work after maternity leave, may need to express milk for daytime feedings by caregivers — or, if they are pumping at their workplace, to minimize break time.

Women who need more complex pumps — ones that have always required coinsurance payments — now must shell out more money as a result of Anthem’s decision, breastfeeding advocates say. That, in turn, raises a key question: Will more mothers simply settle for lower-end pumps that medical experts say might frustrate them and induce them to give up breastfeeding? 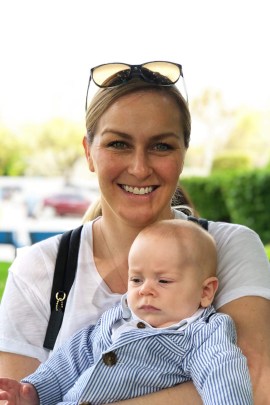 Karissa Soma of Orangevale, Calif., holding her 5-month-old son, Cotton, says the cost of having a baby is hard enough on families without the extra expense of a breast pump. (Courtesy of Karissa Soma)

Breast pumps “are not cheap,” said Karissa Soma, an Orangevale, Calif., mom who took a half-year off work to care for her 5-month-old son. “I paid almost $5,000 in hospital bills, and you add the expense to stay home. It’s already so much.”

Critics of Anthem’s decision believe it cuts against the spirit of the ACA breast pump rule, which was intended to remove barriers to breastfeeding. Research shows the health law provision, which was implemented in 2012, has induced more new moms to breastfeed their babies and to continue doing so longer than before.

“It is clear that this [Anthem] decision would have far-reaching and deleterious effects on a mother’s ability to reach their breastfeeding goals,” the United States Breastfeeding Committee and dozens of other breastfeeding advocates wrote in an April 25 letter to Anthem President and CEO Gail Boudreaux.

Given the well-known benefits of breast milk, the American Academy of Pediatrics recommends that new moms breastfeed for at least a year. But that’s not always easy. Breastfeeding can be hard for a new mom — and for the baby.

When 31-year-old Bakersfield, Calif., resident Megan Eskew, an Anthem enrollee, gave birth in April 2017, she needed a pump to feed her milk to her baby boy, Reid, who spent the first six days of his life in the intensive care unit and could drink only from a bottle.

The hospital-grade pump delivered the breast milk that Eskew, a first-time mom, believed was critical for Reid. When Reid left the hospital, he still needed to drink from a bottle, so Eskew selected a high-end pump that required a coinsurance payment of roughly $100 under the terms of her health plan. That was a year before Anthem cut its reimbursement.

“I’m lucky I had the financial resources to buy a pump,” Eskew said, “but not all moms have those options.”

KHN’s coverage of these topics is supported by California Health Care Foundation, The David and Lucile Packard Foundation and Heising-Simons Foundation