There’s a new drug regimen being touted as a potential cure for a dangerous liver virus that causes hepatitis C.  But it costs $84,000 — or $1,000 a pill. And that price tag is prompting outrage from some consumers and a scramble by insurers to figure out which patients should get the drug —and who pays for it.

Called Sovaldi, the drug is made by California-based Gilead Sciences Inc. and is the latest in handful of new treatments for hepatitis C, a chronic infection that afflicts at least 3 million Americans and is a leading cause of liver failure. It was approved by the U.S. Food & Drug Administration in December. 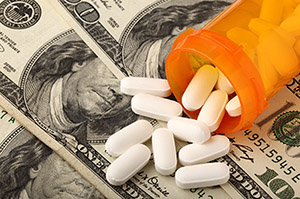 “Everyone is still scrambling to figure out how to handle this,” said J. Mario Molina, president and CEO of Molina Healthcare, one of the nation’s largest Medicaid managed care companies, which is seeking emergency guidelines from the 11 states in which it operates.  “It’s far superior to anything we’ve had to treat hepatitis C.  The problem is it’s extraordinarily expensive.”

Medicaid programs may be particularly hard hit because they are likely to cover a higher proportion of patients with the virus and cannot raise premiums like commercial insurers, Molina said. Medicaid managed care firms like his are paid a set amount per member per month by the state to cover all their medical costs.

If left untreated, hepatitis C causes liver damage over the course of decades. The U.S. Preventive Services Task Force recommends that all baby boomers be tested for the blood-borne virus, which often goes undiagnosed because it produces few symptoms. It is spread mainly by intravenous drug use, but many people were unknowingly infected by poorly sterilized medical equipment and blood transfusions before widespread screening of the blood supply began in 1992.  Some may also been infected through tattoos and piercings with contaminated needles.

With a success rate of better than 90 percent, Sovaldi is seen as a vast improvement over older treatments, some of which helped only half of patients. Those older drugs cost about $25,000 per treatment, while some newer products approved in 2011 have prices closer to Sovaldi, but have more side effects or are more complex to administer.

A typical course of treatment with Sovaldi goes 12 weeks and costs $84,000, but some patients may need to take the drug for twice as long. Guidelines also suggest that for some patients, Sovaldi be used with other drugs, such as interferon and ribavirin, adding to the cost.

Molina said he has asked state Medicaid directors for guidance on how to proceed with its 2.1 million beneficiaries. In the meantime, he said his firm will not cover the drug, which he says could add $300 million to $400 million to its costs this year.  He wants states to cover the drug outside its contracts with his company because the costs were not built into rates negotiated for this year.

“Whether we pay for it or the state pays for it, it will be a huge expense,” he said. “California spends $3,500 per person a year in the Medicaid program. You could cover an awful lot of people for $84,000.”

A Molina spokeswoman said the company is not required to cover the drug since it was approved after its managed care contracts were negotiated. “In the meantime, we are continuing to cover the same medically necessary hepatitis C treatments that were available prior to December 2013,” said the spokeswoman, Sunny Yu.

In traditional Medicaid, states must cover FDA-approved drugs marketed by companies that have negotiated rebates with the federal Medicaid drug rebate program. Gilead participates in that program, a spokeswoman said.

But states have flexibility to manage their Medicaid drug costs by using preferred drug lists and requiring prior authorizations for some treatments. In addition, enrollees covered under the health law’s expanded Medicaid program may have access to a narrower selection of drugs in some cases, depending on how the state has set up its program.

Limiting How Many Are Eligible

Private insurers, meanwhile, are developing their own criteria for which patients are eligible for the drug, said Steven Pearson, who is organizing a public forum in San Francisco on March 10 to help patients, doctors, insurers and policymakers compare Sovaldi’s cost and effectiveness with other treatments.

Some insurers are limiting it to patients who have tried the older drugs, but failed to get satisfactory results. Others will provide it to those in the middle stages of liver damage, but not to those who show little or no signs of damage, said Pearson, who heads the Institute for Clinical and Economic Review, a nonprofit organization that helps groups evaluate the effectiveness of different medical interventions.

A report prepared for the San Francisco forum estimates that if every patient in California with advanced liver damage were treated, the cost would be $6.3 billion.

Gilead says its price is justified because of the drug’s effectiveness. Those who take it can head off chronic problems, such as liver disease or the need for an eventual liver transplant.

“Gilead believes that the price of Sovaldi is fair based on the value it represents to a larger number of patients, including many of those with no current options,” said Michele Rest, a company spokeswoman. “The cost of the entire … regimen of 12 weeks of Sovaldi with interferon and ribavirin is consistent with and, in many cases, actually less than the cost of the previous … regimens – with shorter duration of therapy, increased tolerability, and higher efficacy. “

She said the company has financial aid programs to assist patients who are uninsured, underinsured or who need assistance to help pay for the medicine, but declined to say how many were enrolled.

‘What Is The Proper Cost?’

In 2011, Gilead paid $11 billion to buy Pharmasset, the company that developed the drug, while it was still in final stage testing. Analysts have estimated that the drug will reap billions in annual sales.

Molina says Gilead is entitled to a return, but questions whether taxpayers should be paying so much of its acquisition costs.

“It is estimated that half the patients who get this will be covered by government programs,” Molina said. “If they overpaid for the company they acquired, why should the government have to bail them out?”

Similar questions are being raised by the AIDS Healthcare Foundation, a Los Angeles-based advocacy and health care group, which is urging state Medicaid directors to bargain hard for rebates on the drug’s cost.

“The pricing of Sovaldi is being driven by Gilead’s desire to recoup its investment in Pharmasset, and assumes it can accomplish this by charging Medicaid and other taxpayer-funded programs whatever it wants,” President Michael Weinstein wrote in letters to state Medicaid directors.

Medicaid managed care nonprofit CareSource, headquartered in Dayton, Ohio, says it is already covering the drug, mainly for members who have had bad reactions to the older treatments.

“It’s a great medication for the members, but we are concerned about the cost,” said Chief Medical Officer Craig Thiele.

While there was some discussion about waiting to see if other drugs to treat hepatits C might be approved, Thiele said CareSource didn’t want to delay.

He noted that the questions raised by Sovaldi may apply to many new pharmaceuticals, including potential hepatitis C treatments.

“What concerns me is this may be a trend, a wave of expensive medications,” he said.

“The broader question is what is the proper cost of life-saving pharmaceuticals?” he said. “This is not an isolated incident … this is a trend that is going to get worse before it gets better.”

There’s a Life-Saving Hepatitis C Drug. But You May Not Be Able To Afford It.