MADISON, Wis. — Having health insurance is vital for 21-year-old Mercedes Nimmer, who takes several expensive prescription drugs to manage multiple sclerosis. So Nimmer was thrilled to get health insurance last year through the Affordable Care Act’s marketplace and qualify for a federal subsidy to substantially lower her cost.

Yet, the government assistance still left her with a $33 monthly premium, a hefty amount for Nimmer, who makes $11,000 a year as a part-time supply clerk.

Nimmer, though, doesn’t have to worry about even that expense thanks to a United Way of Dane County program that has provided premium assistance to about 2,000 low-income people since 2014. The program, called HealthConnect, is funded by a 2013 gift of $2 million from UW Health, a large academic hospital system connected to the University of Wisconsin that also runs its own marketplace health plan.

“Oh my gosh, this is a big deal for me to get this help,” Nimmer said, noting the insurance is vital to cover her medications. The money she saves from the assistance program goes to help pay for gas to get to work, she said.

HealthConnect is one of several community-based programs across the United States helping thousands of lower-income Americans with their Obamacare marketplace premiums. Similar efforts operate in Texas, Oregon, Washington, North Carolina and South Carolina.

But premium assistance programs have come under fire from insurers. They argue that it is not fair for hospitals, other health providers and disease advocacy groups financed by providers to try to steer people who could be covered by Medicare or Medicaid into marketplace plans with higher reimbursement rates.

The federal government has banned hospitals from directly subsidizing patients’ health insurance premiums. But America’s Health Insurance Plans, the industry’s lobbying group, wants the Obama administration to prohibit all premium assistance programs that are funded directly or indirectly by hospitals and other providers with a financial interest in the patient’s care.

“In many cases these practices are harming patients and undermining the individual market by skewing the risk pool and driving up overall health care costs and premiums,” AHIP said in Sept. 22 letter to Andy Slavitt, the acting administrator of the Centers for Medicare & Medicaid Services. The letter notes specific concerns about plans assisting patients requiring kidney dialysis. It says one insurer saw its spending on those patients rise from $1.7 million in 2013 to $36.8 million in 2015 when the number of patients with serious kidney disease rose from 28 to 186.

AHIP officials also said patients could face consequences if the third-party groups stop paying premiums or the government determines patients are receiving a federal subsidy for which they are not eligible. 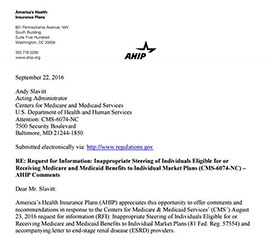 America’s Health Insurance Plans wants the Obama administration to prohibit all premium assistance programs that are funded directly or indirectly by hospitals and other providers.

In response, CMS says it is considering new rules for third-party payment programs.

Nonetheless, insurers are taking action. Aetna, which announced this summer that it was scaling back its marketplace offerings, said that third-party groups steering patients to the individual market had contributed to an unhealthy mix of customers in its marketplace plans.

Blue Shield of California in July filed suit in a state court against CenCal Health, which manages the Medicaid program in Santa Barbara and San Louis Obispo counties. Blue Shield alleges that CenCal was avoiding millions of dollars in medical care claims by enrolling around 40 of its very ill members in Blue Shield’s individual health plans and paying the premiums on their behalf. CenCal denied the allegations in lawsuit, saying it paid the patients’ monthly Blue Shield insurance premiums so they could afford private insurance. It has since discontinued the practice.

UnitedHealthcare filed a lawsuit in federal court in July against kidney dialysis provider American Renal Associates, accusing it of encouraging patients in Florida and Ohio who were eligible for Medicaid or Medicare to move to the insurer’s commercial plans to extract up to 20 times more than the $300 or so that the federal programs pay in reimbursements. American Renal Associates has said the suit is without merit.

The suit alleges that the patients’ premiums were paid by the American Kidney Fund, an advocacy group for patients.

AHIP officials note that the fund is supported by dialysis providers who stand to benefit financially from patients gaining marketplace coverage over payments from Medicaid or Medicare.

The nonprofit American Kidney Fund has helped more than 6,400 people with their marketplace premiums. The fund’s officials said it’s not trying to steer people away from government coverage but trying to help those who otherwise couldn’t afford coverage.

“It is critically important to emphasize that people with disabilities in general — and with end-stage renal disease in particular — should not be broadly excluded as a class from the insurance marketplace if they are unable to afford their health insurance premiums,” LaVarne Burton, the fund’s CEO, said in a statement.

Some patient advocates, like those at HealthConnect in Wisconsin, say third-party payers have an important role in helping low-income customers afford their coverage. UW Health said in a statement that HealthConnect helps all providers, including UW Health, by reducing the number of uninsured patients and potentially helping people seek care earlier in their illness.

The program pays an average of $109 monthly per person in premium assistance. For every dollar spent, HealthConnect generates $2.26 in federal subsidies, said Krystal Webb, a spokeswoman for United Way of Dane County.

United Way said it structured HealthConnect to avoid a conflict of interest. Eligible people first buy their policy, which can be any of several silver-level plans on the federal marketplace. After that, they can apply for a HealthConnect subsidy. The program is administered by United Way, and UW Health plays no role in patients’ choice of health plan, although its marketplace plan, Unity Health, refers people who may be eligible there.

Despite AHIP’s concerns, some health insurers in Dane County say HealthConnect is filling a need, according to interviews with several plans. “We support United Way’s HealthConnect efforts as a way to provide affordable insurance options to the residents of Dane County,” said a spokesman for Dean Health Plan, one of the larger marketplace plans in the county.

In Texarkana, Texas, Christus St. Michaels Health System donated $200,000 last year to an assistance program serving 138 people with marketplace coverage. The program is run by a local government agency called the Ark-Tex Council of Governments, and Christus has no control over who enrolls or what plan they choose.

“Our mission is to help the poor and this is certainly one of the ways to do that, and it gives people the opportunity to have health coverage when they normally wouldn’t,” said Mike Hargrave, the hospital’s manager of employee assistance and community outreach services. People with incomes between 100 and 150 percent of the federal poverty level (about $11,880 to $17,820 for an individual) are eligible.

Hargrave doesn’t deny the hospital could benefit when more people gain insurance, but he notes other hospitals in the region benefit, too.

The insurance industry is also troubled by premium assistance programs funded by anonymous donors since they could be hospitals looking to protect their identity, said AHIP spokeswoman Clare Krusing.

For example, PremiumHealth.org, run by United Way of the Greater Triangle in North Carolina helps more than 850 people with incomes between 100 percent to 175 percent of the federal poverty level in Durham, Orange and Wake Counties.

An anonymous donor provided $1.2 million in funding for the program, said Melanie David-Jones, a senior vice president for United Way. She would not say why the donor wished to remain anonymous.

Noel Pitsenbarger, 48, of Durham, said the program made it possible for him to have health insurance this year by covering the $200-a-month premium for his Blue Cross Blue Shield of North Carolina policy. With insurance, he said, he got a colonoscopy, physical exam and help paying for several medications. And it saved him from having to pay a $1,000 bill after he cut his finger and had to go to the emergency room.

“It’s been extremely beneficial,” he said.