This story is part of a partnership that includes WHYY's Newsworks, NPR and Kaiser Health News. It can be republished for free. (details)

Imagine you’re at home. Maybe that’s in Florida, Wisconsin, Rhode Island, wherever. You have cancer. You just had another round of chemo, and the phone rings. 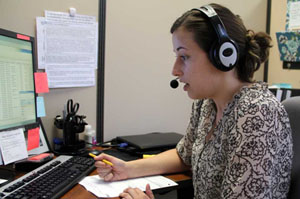 “My name is Kate. I’m a health care counselor,” the gentle voice says from her cubicle in Cherry Hill, N.J..

This is no telemarketing call …  it’s about the end of your life.

Kate Schleicher, 27,  is a licensed clinical social worker, who knows almost as little about you as you do about her. Except she knows your phone number, your insurance provider and that you are pretty sick.

Schleicher is one of 50 social workers at a company called Vital Decisions. After sending a letter (people rarely respond) counselors essentially cold-call to offer what they describe as “nondirected” end-of-life counseling. The company gave a reporter permission to listen to and record the social workers’ side of some of these calls.

“When you say that getting better is the most important thing on your mind, what does that look like for you?” Schleicher asks a man in Rhode Island.

“Breathing. Ok,” she repeats back, as he describes what a struggle it has become for him. “I also hear concern from you that I don’t think that’s necessarily going to happen,” Schleicher continues. “Has someone told you that, or is that your own feeling?”

The call lasts about 15 minutes. Schleicher asks if it’s ok to follow up, in a month or so. The hope of this program, she says, is to build a relationship over the phone, so he might be comfortable discussing his situation and his goals. Then he’ll be empowered to communicate those things with others, including his family and his doctors. He could also choose to allow the counselor to talk to his doctors or family directly. It’s paid for by insurers and federal privacy rules permit this for business purposes.

“The accepted norm in terms of the role of the individual who’s going through this advanced illness experience is to be passive and be along for the ride, not to take charge, not to take control and ask for help,” says Daitz, adding that navigating care and an individual’s priorities can become increasingly difficult as a disease progresses. “So when you’re faced with a set of choices, that none of which represent a really good choice, you become ambivalent.”

To underscore this reality, here’s a partial transcript of another patient-counselor conversation. In this case, the patient gave permission for a reporter to hear and broadcast his side of the conversation:

“I have a malignant brain tumor. I’ve been fighting it for over a year now,” the man tells Ariana Noto. “The meds make me dizzy and when I’m that dizzy I can’t drive, I’m trapped in the house, I’m going nuts.”

Over the course of minutes the conversation goes from one between complete strangers to one of raw intimacy. The man confides information he may not have told anyone else. His meds make it difficult to function and do simple things like sitting around a table with friends, having a beer.

The two talk about what whether he understands about the effectiveness of his medicine. He’s not sure. They go over what he might want to clarify with his doctor.

“… You can control how much treatment you want and how you want symptoms to be managed as it does get worse,” Noto says.

“But I can’t talk that way with my son in the room,” he tells her.

CEO Daitz says jumpstarting unbiased, honest discussions around end-of life care, early on, could improve the quality of life for patients with advanced illnesses and their families in those final weeks and months together.

Such topics are still sensitive, but Daitz says insurers and patients are more open to addressing this now. The effort to reimburse doctors for these end of life conversations recently made a comeback in Congress.

That’s the thinking behind the company, formed in 2008, and a wave of other similar initiatives. It wasn’t popular at first, says Daitz, recalling the uproar over unsuccessful attempts to add to the health law payments to doctors for advanced-planning and end-of-life conversations and false rumors of “death panels.”

“No one ever accused me of having good timing,” he says.

Talking Freely About What You Want

The goal is for patients to receive care in those final months that aligns with what the patient wants, even if that’s the most aggressive treatment available. But it “turns out when you’re able to have more effective decision making amongst the family and physicians, an individual often has values and priorities” that are met by palliative care instead of more treatment, according to Daitz.

And when these conversations do happen, there’s can be another byproduct: reduced costs. Research is finding that when patients fully understand aggressive care, many choose less of it. By Daitz’ own rough estimate, the company’s services have resulted in about $10,000 less in health care spending per patient, “$100 million to the health care system in 2014.”

But some people are wary of the company’s approach. Dr. Lauris Kaldjian, professor of bioethics at the University of Iowa, has concerns about the social worker, patient and family never actually meeting. “Because if you don’t have enough knowledge about what’s actually going on with the patient, it would actually be irresponsible to pretend to have discussion that depends upon such knowledge.”

End-of-life decisions are hard to keep totally neutral, he says, so that’s why he’d want full transparency from insurers and the company to guard against bias in the sessions.

Dr. Robert Arnold, who heads the palliative care division at the University of Pittsburgh Medical Center, says insurers may be well situated to address the communication disconnect, at least while providers work through their own discomfort and improve their skills. He sees companies like Vital Decisions as part of a larger trend.

“Would I prefer that we live in a health care systems where doctors, nurses, nurse practitioners and social workers who knew the patient were having these conversations? Yes,” he says. “This is better than what patients have currently been getting.”

Meanwhile, Vital Decisions’ Daitz says he looks forward to the day when these conversations are taking place and his company is no longer needed.