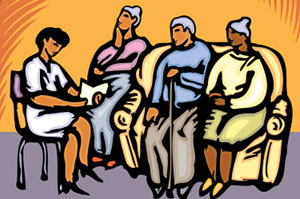 TALLAHASSEE, Fla.  On the fourth floor of the Capitol, lobbyists for the HMO and nursing home industries are huddling over bills vastly expanding managed care for Florida’s three million Medicaid recipients.

The nursing home representative wants to make sure that none of the facilities he represents is excluded from HMO contracts to provide long-term care. The HMO representative has no problem with that. “It’s the hospitals we are worried about,” she said.

For good reason. Florida hospitals want to set up their own managed-care networks for Medicaid patients, under more favorable financial terms from the state.

Lobbying battles like this one are being fought across the country as more than a dozen governors try to contain the cost of Medicaid, the state-federal program for the poor and disabled, by requiring more people to go into managed care plans. With billions of dollars at stake, insurance companies, hospitals and doctors are fighting over money and control.

About half of the nation’s 50 million Medicaid recipients are in private managed care plans, which the states typically pay a set amount each month per patient. These plans limit patients’ choice of doctors and hospitals. The other half has more freedom to choose where to go for medical care, with the Medicaid program paying a fee for each visit and procedure.

Medicaid is increasingly becoming a managed care program, a significant trend as the states gear up for a massive expansion required by the federal health care law. Beginning in 2014, an estimated 16 million more Americans are expected to qualify under the law’s expanded eligibility criteria.

Medicaid managed care plans are gearing up. UnitedHealthcare, the largest plan with about 3.4 million Medicaid recipients, announced this month it plans to add another 300,000 this year.

While some patient advocates worry about the quality of managed care, the most powerful opposition to the states’ expansion plans this year is coming from hospitals, doctors and nursing homes.

“Whenever you are changing the way you do business,” said Matt Salo, executive director of the National Association of Medicaid Directors, “you are going to have winners and losers.”

Opposition by health care groups has held up plans in Maine and Louisiana to require Medicaid recipients to enroll in managed care plans. Maine’s doctors are leery of managed care plans getting in the way of treating patients and getting paid, according to Andrew MacLean of the Maine Medical Association. “Doctors are worried about losing local control of the program,” he said.

In Louisiana, doctors and hospitals have said managed care could discourage provider participation in the Medicaid program. Hospitals also fear losing hundreds of millions of dollars they receive in federal funding for treating large numbers of poor people.

The state hopes to launch next year a program to require most of its 1.2 million Medicaid recipients to enroll in an HMO or a less restrictive type of managed care overseen by physicians.

In January, Mississippi became one of the latest states to institute managed care for Medicaid. But hospitals and doctors successfully lobbied to limit the program to 15 percent of Medicaid recipients and to end it in June 2012. The health industry also made sure managed care companies could not lower reimbursement rates to providers or reduce benefits to recipients. Those provisions left managed care companies little wiggle room to control costs.

State Medicaid officials said they expected resistance. “We have organizations who make a living off of sick people and they are less anxious to lessen the amount of money into their pockets,” said Francis Rullan, spokesman for Mississippi Medicaid.

Texas is moving toward expanding mandatory managed care into the Rio Grande Valley, beyond the cities where it’s required now: Dallas, Houston, Austin and San Antonio. Virginia plans to expand its program into the southwestern part of the state next year.

Michigan, which has had mandatory managed care for most of its Medicaid recipients since the late 1990s, this year added 21,000 foster care children and next year plans to include 20,000 children with special health needs such as hemophilia and spina bifida.

South Carolina also joined the trend this year, as it began requiring most of its 830,000 Medicaid recipients to enroll in a managed care plan. Previously, participation in managed care had been voluntary and people who “could benefit the most from coordinated care” weren’t signing up, “so we were not getting the kind of cost containment we had hoped for,” said Jeff Stensland, spokesman for the South Carolina Department of Health and Human Services.

Florida has wrestled for years with whether Medicaid managed care should be required. Today, about 40 percent of recipients are in private managed care plans, but participation is required in only five counties; some recipients elsewhere participate voluntarily. The drive to expand the requirement statewide took off after Republican Rick Scott, a former hospital executive, became governor in January and the state’s Republican-dominated legislature embraced managed care to help solve its budget woes.

Medicaid is the second largest program in Florida’s budget behind public education with its cost this fiscal year expected to be about $20 billion. The federal government typically pays about 56 percent of Florida’s Medicaid costs.

In late March, the Florida House passed a bill to require most Medicaid recipients to join managed care plans and the Senate appears ready to adopt a similar bill this month. But hospitals, doctors and nursing homes have extracted sweeteners.

Doctors, who oppose the expansion of managed care, would get medical liability relief so they face lower caps on damages in malpractice suits from Medicaid patients.

Nursing homes are hopeful that that managed care plans won’t be able to control their reimbursement rates; that power would remain with the state under the House bill, but not in the Senate bill.

Hospitals appear likely to win legislative approval to form their own “provider sponsored networks” that will compete with HMOs but have the advantage of still being paid for each service, instead of a fixed per-patient monthly rate that HMOs receive. Doctors and community health centers also could do this.

The Florida Association of Health Plans is upset that hospitals, which are the most eager to create their own plans, wouldn’t face the same financial risk or meet rigorous financial solvency requirements imposed on HMOs. “We just want a level playing field,” said Michael Garner, the group’s CEO and president.

For their part, consumer advocates remain worried about the impact of mandatory managed care, which has a mixed record in Florida.

“We are concerned that setting up a system based on for-profit HMOs means you have to pay shareholders and that will result in an already underfunded program having less money to help patients,” said Karen Woodall, a long time consumer advocate who directs the Florida Center for Fiscal and Economic Policy, an independent think tank.