Flavio Casoy vividly remembers one of his scariest moments as an intern: On duty at a San Francisco hospital for nearly 29 hours, he was at the bedside of a very sick patient when the man’s oxygen level began to plummet. Casoy stared, transfixed, at the monitor. “I knew something was wrong, but I couldn’t make myself think,” he recalled. Only after “a colleague walked into the room, pushed me on the shoulder and said, ‘Get going’ ” did the exhausted doctor spring into action. 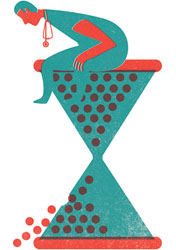 These days, interns, as first-year residents fresh out of medical school are known, no longer face the punishing shifts Casoy endured just four years ago. In July 2011, after more than two decades of impassioned debate, the Accreditation Council for Graduate Medical Education (ACGME) reduced the maximum allowable shift for the least experienced doctors from 30 straight hours to 16. That’s the point at which studies have found performance begins to deteriorate, and roughly double the consecutive
hours of flying time allowed pilots. The council, which oversees residencies for 111,000 young doctors, also reaffirmed a controversial 2003 directive limiting the average workweek for all residents to 80 hours — the equivalent of two full-time jobs.

In mandating shorter shifts for interns, a move opposed by more than 70 percent of residency program directors, the ACGME cited studies linking fatigue to serious medical errors and injuries to residents from needle sticks and auto accidents. After their internship year, residents are permitted to work up to 28 hours per shift, on the theory — disputed by sleep researchers — that they learn to effectively manage fatigue. Depending on the specialty, residency training lasts an additional two to seven years.

But as a new class of interns, who arrived July 1, begins treating patients in teaching hospitals around the country, a recent spate of studies questions whether the rules have made the situation worse.

Medical researchers at Johns Hopkins University and the University of Michigan have found that shorter shifts have resulted in greater work compression, forcing interns to cram more work into fewer hours and depriving them of valuable education by limiting the time they can spend treating patients whose illnesses evolve. A March editorial in JAMA Internal Medicine decried the new standard as “too inflexible” and warned that shorter workdays are increasing handoffs, which can cause errors as patients are transferred from doctor to doctor.

“The 2011 rules have led to many unintended consequences,” said Sanjay Desai, director of the internal medicine residency at Johns Hopkins Hospital, adding that the 16-hour cap “was imposed without [sufficient] data showing it would be beneficial.”

Desai led a study that randomly assigned interns to the new system and compared them with interns who worked traditional hours. Under the 2011 regimen, interns got more sleep but attended fewer educational programs to avoid exceeding work hours; the 2011 group also said they believed they were delivering poorer care than interns who worked longer shifts.

It’s a “real shock to the system having interns as shift workers,” said Srijan Sen, an assistant professor of psychiatry at the University of Michigan, whose study appeared in JAMA Internal Medicine. Sen analyzed responses to an annual survey by 2,323 interns from 51 residencies conducted before and after the rule change. His team found that the percentage of interns who said they had committed a serious error rose from 20 percent to 23 percent.

But other experts say that these findings are preliminary and based on self-reporting, not hard data. Nor, they say, do they prove that the new rule is flawed or that a return to 36-hour shifts would be preferable. A key reason for work compression, they maintain, is that influential senior faculty at many hospitals regard the new rules as “coddling,” which affects how they are implemented. And many institutions have failed to hire additional staff such as nurses, phlebotomists, clerks and hospitalists to cover the workload, Sen reports.

“There are many centers that culturally, fundamentally, don’t believe in this change,” said Christopher Landrigan, an associate professor of medicine and pediatrics at Harvard Medical School and a member of the Harvard Work Hours Health and Safety Group at Boston’s Brigham and Women’s Hospital.

Landrigan headed a landmark 2004 study that is largely credited with — or blamed for — the 16-hour rule. His team found that interns working a 24-hour shift in the intensive care unit of Brigham and Women’s committed 36 percent more serious errors than when they worked 16 hours. Among the mistakes: giving a patient a drug to which he had a known allergy, prescribing overdoses of medications by incorrectly calculating dosages and inserting a chest tube on the wrong side.

“Many people of my generation are deeply invested in” the system in which they trained, when 120-hour workweeks were common, said Landrigan, who is 43.

Shorter shifts are also occurring at a time of increased hospital admissions at major teaching hospitals, coupled with briefer stays and sicker patients. “The way the system works today, you’re getting a huge volume of patients coming in, and it makes for a much more frenetic environment,” Sen said.

Interns, who earn about $35,000 to $50,000 annually, have long provided cheap labor for teaching hospitals, performing many tasks that don’t require a medical degree. They chase test results, complete mounds of documentation, deal with insurance companies and for years covered hospital wards at night with little supervision. One study estimated that limiting intern shifts to 16 hours would cost $177 million to $982 million annually, an expense teaching hospitals say they can’t afford.

But some places have embraced the change.

Vanderbilt University Hospital’s internal medicine program spent nearly a year revamping its internship, creating day and night teams that work 13 hours, with an overlap to improve patient handoffs. A pair of recent studies found that the new system was working well: Despite increased handoffs, researchers found minimal impact on the efficiency and quality of care that patients received, as measured by readmissions, ICU transfers and other data.

Other programs have adapted by moving lectures from the traditional lunchtime to hours when more residents are on-site, persuading attending physicians to conduct rounds early rather than late in the morning and streamlining work processes, said Sandy Shea, policy director of the Committee of Interns and Residents. The group, a union with 13,000 physician members, supports the new rule, as does the American Medical Student Association.

“I never once felt like I was walking away from a sick patient; there is good continuity and we got a good education,” said Amy Castilano, who finished her internship in internal medicine at Summa Akron City Hospital in Ohio two weeks ago.

ACGME chief executive Thomas Nasca said he believes the 16-hour rule is being blamed for bigger, systemic problems such as increased work compression and communication failures in an increasingly complex and fragmented health-care system – problems that won’t be solved by making interns work longer hours.

“The old model of internship is flawed and unacceptable,” said Nasca, former dean of Jefferson Medical College in Philadelphia. “It’s why there is a July or August effect,” he said, referring to the annual spike in deaths at teaching hospitals when interns arrive.

But Nasca said that concern about surgery residents’ ability to manage postoperative complications and other factors are prompting the ACGME to consider simplifying duty-hours rules, although it is unclear whether interns would be affected.

Until 2011, residency had changed little since it was pioneered in the 1890s by William Osler at Hopkins. Round-the-clock shifts were a cornerstone of medical training, and internship was particularly rigorous, even brutal. Acceptance of the status quo began to change after the widely publicized case of 18-year-old Libby Zion, who died in 1984 of cardiac arrest at a Manhattan hospital while being treated by an exhausted intern juggling more than 40 patients during a 36-hour shift.

In 1989, New York passed rules, which were widely flouted, limiting all residents to 24-hour shifts and 80-hour workweeks. Medical groups succeeded in killing similar bills in other states, including Massachusetts. Some specialties, including internal medicine, set their own limits, which were largely ignored. And it was left to interns and residents, whose careers depended almost exclusively on the recommendations of their superiors, to police themselves and report transgressions.

In some specialties, notably surgery, there were no limits: Sixty-hour shifts were not uncommon, and trainees sometimes fell asleep at the operating table.

A multitude of studies from other industries, including aviation, nuclear power and aerospace consistently showed that fatigue degrades every aspect of performance — judgment, vigilance, mood, motor coordination and even the ability to recognize errors. Nonetheless, opponents of shortened hours argued that doctors were different from other humans in their ability to transcend fatigue. And, they noted, no study had specifically tied fatigue to medical errors.

In 2003, the ACGME, concerned about abusive conditions and overwork, imposed the 80-hour week but left it to hospitals to structure shifts.

Nasca said that while many programs have been placed on probation, two residencies — Hopkins’s internal medicine and Yale’s surgery program — lost accreditation for repeatedly violating work hour rules; both have been restored.

In 2008, a report by the Institute of Medicine recommended limiting shifts for all residents to 16 hours, a move the ACGME rejected.

In recent years, awareness of the dangers of sleep-deprived doctors has permeated the public consciousness.

“I can’t count how many patients have asked me how much sleep I got,” said urology resident John Brockman, a graduate of Case Western Reserve University School of Medicine who just finished his internship at Washington University in St. Louis.

“It was very difficult,” he said, but it has been successful. The overhaul did not involve hiring more staff but focused on improving coordination between departments and reengineering some of the ways residents work. It also involved trade-offs, such as eliminating three months of elective courses available to residents.

Amy Castilano, who plans to specialize in allergy and immunology, said she was “pleasantly surprised” that her internship was not the awful year she had observed elsewhere as a medical student. Her shifts, which included workdays stretching from 7:30 a.m. to 11 p.m., were manageable.

“I’d heard horror stories that residency is the worst time of your life and that you’re treated like crap and the hours are insane,” she said, which was not her experience. “I personally don’t believe you can take very good care of people if you’re not taking care of yourself.”

Some Doctors Questioning Whether Shorter Shifts For Interns Are Endangering Patients